The Bucs Literally Told Us What They Were Going To Do 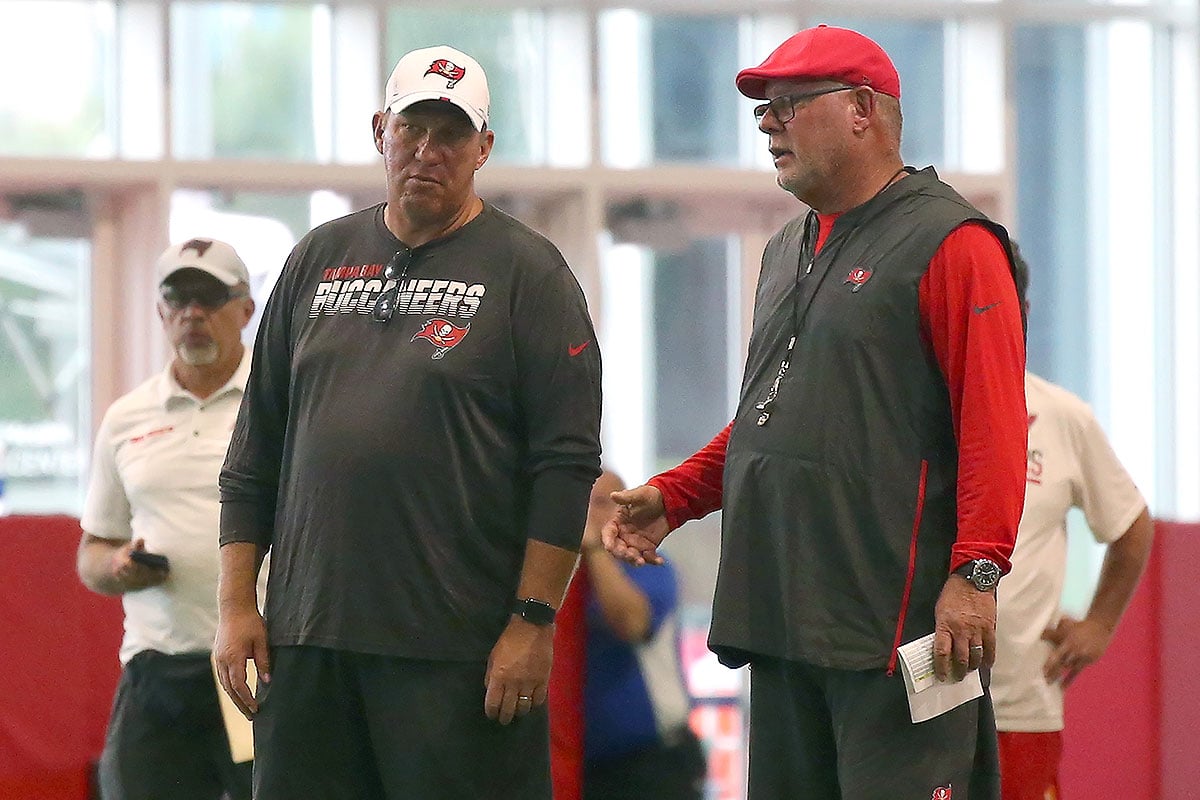 The Bucs Literally Told Us What They Were Going To Do

As the 2022 NFL offseason began the Bucs were facing a mountain of questions. Their future Hall of Fame quarterback Tom Brady had just retired. Pro Bowl left guard Ali Marpet had joined him. The team was facing free agency for 10 additional starters. Speculation ran rampant on how the team might address the looming holes.

It turns out all we should have done was simply ask the team.

It seems they were more than willing to show their cards.

What do I mean?

Take a look at the public comments made by general manager Jason Licht and former head coach Bruce Arians. They lay out the blueprint for their offseason well ahead of the actual moves they actually made. It’s quite a refreshing look from an NFL team in a league where most teams often hold their cards close to the vest. The Bucs certainly didn’t do that this offseason. By March 1 the NFL world was in full speculation mode as to what the Bucs might do at the all-important quarterback position following Brady’s retirement. Would Kyle Trask be thrust into the starting role? Could the Bucs trade for Derek Carr or Kirk Cousins? Would the Bucs sell out and make a play for Deshaun Watson?

Licht’s public statement was simple. “We will leave a light on for Tom Brady.”

Twelve days later, sure enough Brady un-retires. The Bucs didn’t make a drastic move that might have prevented them from keeping the GOAT. They very much left the light on for him.

On March 7, during a media availability at the NFL Scouting Combine, Arians spoke about the team’s future at interior defensive line. Here is what he had to say.

“For us right now, it’s quickness,” Arians said when asked what the Bucs need up front. “We’ve got strength – we’ve got plenty of strength. We need some quickness in the interior pass rush. We’ve got a good outside pass rush, so for us, it’s watching these guys and seeing whose interior pass rush [fits us]. But also, who is still stout enough to stop the run. We don’t need another Vita [Vea]. There’s not another one out there anyway. And if we get our guys back (Ndamukong Suh, Will Gholston, Steve McLendon), I’m fine, too. But we need something quicker in there.”

On April 29 the Bucs drafted Logan Hall in the second round of the 2022 NFL Draft. Hall was known in college for his speed as an inside rusher and ran a 4.88 40-yard dash at the NFL Combine. He certainly fit that bill.

Meanwhile the Bucs did bring back one of the three “our guys” Arians referenced by re-signing defensive end Will Gholston. And on Wednesday the Bucs officially signed defensive tackle Akiem Hicks. He brings a ton of talent as an experienced pass rusher. And as I detailed in my most recent “Grinding the Tape” column, much of that pass rush talent is predicated on his lightning quick first step. 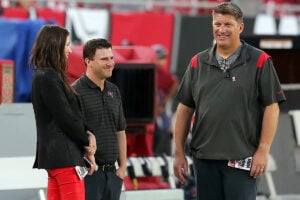 As I mentioned earlier, the Bucs faced the possibility of losing 10 starters via free agency following the 2021 season. On the offensive side of the ball, they were WR Chris Godwin, TE Rob Gronkowski, RG Alex Cappa, C Ryan Jensen, and RB Leonard Fournette. On defense, those free agents were Suh, Gholston, CB Carlton Davis III, S Jordan Whitehead, and OLB Jason Pierre-Paul.

But which players would Tampa Bay prioritize? Again, looking at the team’s public comments and you can see they were broadcasting their intentions to those who cared to listen.

On March 1, Licht was asked about Godwin and said, “To be quite frank, it’d be hard to imagine moving forward without Chris. We’ll see what we can do.”

Tampa Bay wound up applying the franchise tag to Godwin for the second straight year before coming to terms with him on a three-year, $60 million contract extension.

On March 21 during a press conference for Godwin’s re-signing, Licht addressed the possibility of Fournette returning to the Bucs. Licht said he “would love to have Leonard back.”

The Bucs re-signed Fournette the next day to a three-year, $21 million contract.

Following Marpet’s retirement, Arians had this to say about the offensive line at the NFL Scouting Combine: “It changes a lot of things as far as where we’re headed in free agency, with Ryan and [Cappa] and [Aaron] Stinnie. Obviously for us, offensive line is huge. It’s prominent. It’s paramount. We’ve got to dive into more guys here than we probably would have. We can’t replace the player, but if we can get back Ryan and Alex and Stinnie – they all played together. Nick Leverett played. We went through seven or eight offensive linemen last year. Those five guys were iron men for most of the year until January. I think we’re fine there.”

But it was Licht who singled out Jensen over Cappa. “He has been the center pivot of our offense,” Licht said at the Combine. “We signed him when we did to elevate and set the tone of the toughness of the team, and he’s definitely done that. I think for me it’s a definite priority to continue that.”

And so the Bucs re-signed Jensen but not Cappa. And in keeping in line with Arians’ comments about the O-line in Indy, the Bucs traded up in the second round to draft guard Luke Goedeke. 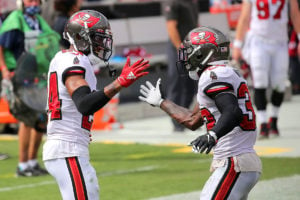 When asked about  Whitehead, Licht focused more on the past than the future. Here is what Licht had to say about Whitehead: “Jordan has become a very good player for us. It’s just his presence on defense when we didn’t have due to injury. You could see that we were missing a little bit of juice that comes from him. He provides that. He’s been a good player for us, and a great pick for us. I’m proud of our staff for drafting him. Ideally, you would love to have him back, but we’ll see where it goes.”

As for Davis, the Bucs’ brass was a bit cagier. When asked about Tampa Bay’s top cornerback, both Arians and Licht mentioned his talent followed by the caveat that it was largely dependent on his health. It can be inferred that the team was using this as a negotiating tactic, betting that other teams might be worried about Davis’ missed games due to various injuries.

That in turn could have driven his price down. The gamble seems to have paid off, as most analysts, me included, pegged Davis for an AAV somewhere around $18 million per year. Instead, the Bucs were able to allow Davis to test free agency and still re-sign him at a much lower AAV of $14.83 million per year.

With many teams in the league unwilling to be honest and forthright about their team building strategies and intentions it can be easy to ignore what a general manager or head coach says. But when it comes to the Bucs that just isn’t the case.

Speculate all you want about what the Bucs might do. But if you really want to know what they will do, it seems the best strategy is to just listen to what they say.

Exactly! Pay no attention to the online peanut gallery including the negative nancies who plague the comment threads here at PR, or to the media trash talkers like Mike Florio. Just listen to the Bucs leadership. They don’t lie, but they aren’t blabbermouths either. Their overall objectives have been an open book. They also give hints now and then as to what they’re thinking, or how they’re strategizing negotiations for a given player signing. Thanks Joshua – I value your writing far and above what a certain former PR writer regularly spewed here. You get what your role as media… Read more »

Last edited 28 days ago by Naplesfan

Dude. Shut up. Anymore knob gobbling of Licht and PR might have to call his wife.

Don’t forget about the trade from NE! That trade brought a talented guard to bolster our o-line.

Mason and Wirf, the right side is solid

Luke Goedeke was a tight end before he moved to the line. Wonder if there can be a few trick play drawn up for him. Speaking of Hicks, he actually played running back for a few plays in the past.