The 2022 NFL Draft is over, but it’s never too early for a 2023 NFL mock draft, right? Here are some way-too-early selections for the Bucs next year from a host of 2023 mock drafts.

It’s interesting how many draft experts have the Bucs selecting a quarterback next year despite the team having drafted Kyle Trask in the second round in 2021. And it’s also noteworthy that four have the Bucs losing in the Super Bowl and two experts have Tampa Bay winning Super Bowl LVII.

No. 31 – Buccaneers – North Carolina State QB Devin Leary
N.C. State head coach Dave Doeren called Leary the best quarterback in the country on the Tailgate podcast last month. While I wouldn’t go that far, Leary had himself one heck of a 2021 season. He earned an 85.1 passing grade with 31 big-time throws and only nine turnover-worthy plays as a redshirt junior in 2021.

No. 31 – Buccaneers Florida QB Anthony Richardson
Another Gator in this first round and another Gator quarterback to the Tampa Bay Buccaneers. This time, however, Anthony Richardon’s skill set is a dramatic improvement over Kyle Trask’s. Richardson has an elite arm. He’ll drop perfectly placed throws 50 yards downfield with the flick of a wrist. Richardson can improve his pocket presence as the full-time starter finally, and that should come in time. What separates Richardson from any generic big-armed quarterback is the fact that he has a unicorn-like skill set. He’s 6’4” and 236 pounds but reportedly hit as low as 4.4 in the 40-yard dash. Those kinds of numbers would be unrivaled as one of the best athletic performances from a quarterback in history. 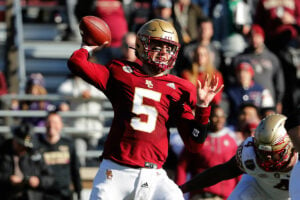 No. 31 – Buccaneers – Boston College QB Phil Jurkovec
Jurkovec returned to BC after an injury disrupted his ’21 season. He’s a Notre Dame transfer who layers the ball well to all levels and has a lot of the traits NFL teams look for in their signal callers.

No. 31 – Buccaneers – Penn State CB Joey Porter, Jr.
The Buccaneers have some expiring contracts at the cornerback position to consider in the offseason and may need to look to the draft for replacement. Porter is everything the Buccaneers typically prefer in terms of size and physicality from the position. No. 32 – Buccaneers – Clemson LB Trenton Simpson
The Bucs could grab an understudy for Lavonte David. The 6-foot-3, 225-pound Simpson played well in 2020, recording 28 tackles, four sacks and one forced fumble. In 2021, he had 65 tackles, six sacks and two passes broken up. Simpson has a ton of ability plus excellent size to go along with quickness and athleticism.

No. 30 – Buccaneers – Florida State DB Akeem Dent
Dent, who hails from Pahokee, Fla., the same hometown as Andre Waters, is a versatile DB who stands 6-foot-1, 195 pounds and could wind up as a corner, safety or slot in the NFL. The Bucs haven’t drafted a first-round defensive back since Vernon Hargreaves in 2016, and Todd Bowles will have fun finding ways to use Dent.

Most of these picks are in 30-32 range, i.e. predictions they will at least make it to the NFC championship game.

Assuming AR15 plays up to his potential this season, and then assuming he actually comes out after this season (I think he’ll stay through next season if everything is going great), then he would be an upgrade over Trask. Anyone else in that pick range won’t. If Trask had stayed last year and continued on his prolific tear, he would have been the first QB off the board this past draft and would have gone much earlier than Pickett. I think we’ll be needing to pick at other positions when the draft comes around next year.

Way to early says it all!

It’s way too early even when the article is titled “way too early”… In 3 months it’s still way too early. I have no interest in next year’s quarterbacks.

It appears some people love the process of figuring out who the team “should” draft as almost much as watching the team play during the regular season. 😑 They can’t get enough of it.
Having said that I am intrigued by the first suggestion for Lavonte David’s coming replacement. Otherwise, I would not be giving it any thought for a while. It surely won’t be one of the recent ILBs we have previouly drafted.