2017 NFL Combine Five Up, Five Down: Defensive Line and Linebacker 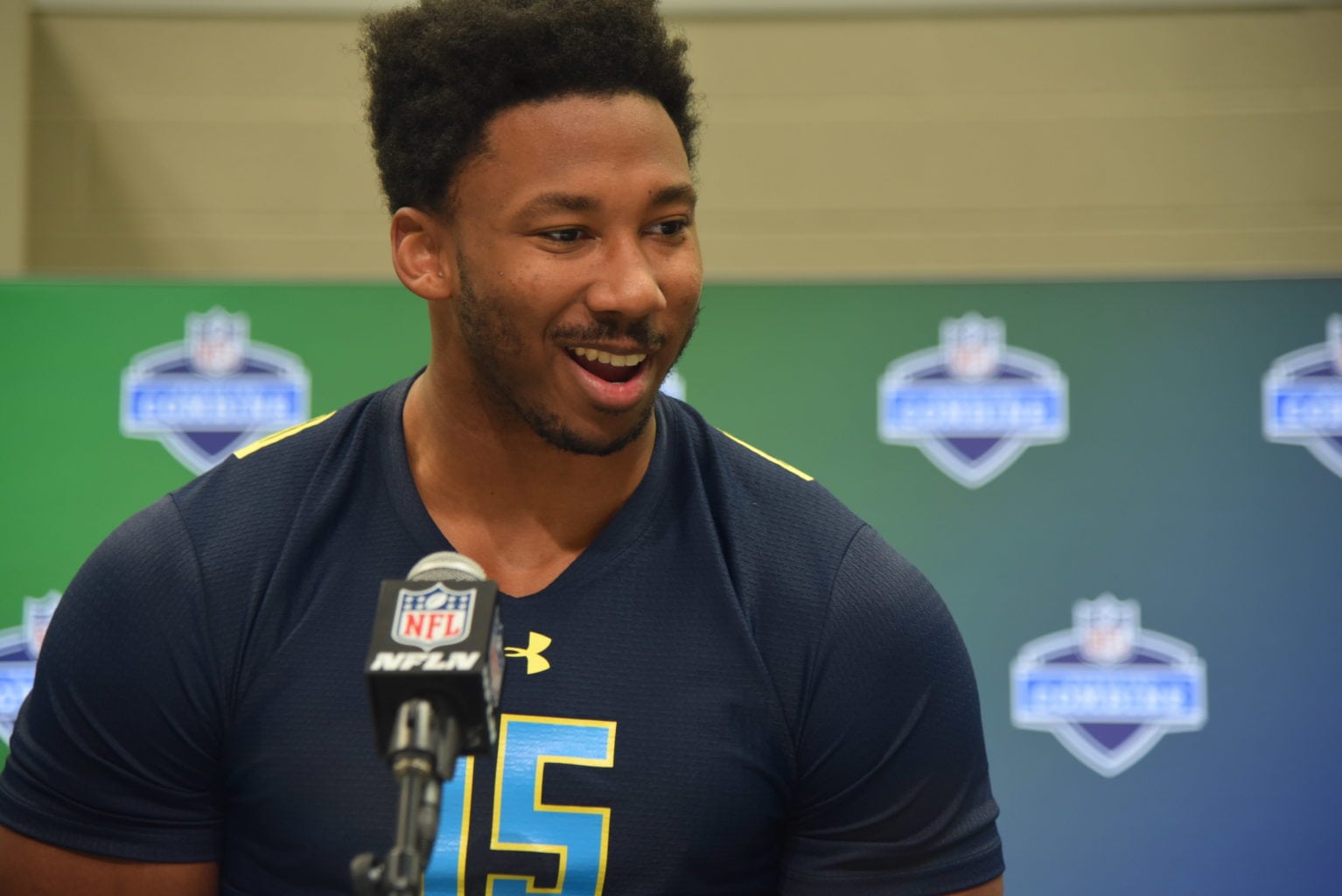 2017 NFL Combine Five Up, Five Down: Defensive Line and Linebacker

Sunday’s on-the-field workouts featured the next generation of pass rusher and linebackers. With a class that was touted as “one of the best defensive line classes of all time”, expectations were sky high. In terms of the top (and the reason why I don’t even have him on the list), Texas A&M’s Myles Garrett remained the undisputed No. 1 overall prospect with a 4.63 40 -yard dash on a 1.63 10-yard split (at 265 pounds). He also recorded a 41-inch vertical jump – the second highest jump for a DE since 1999. Those are numbers that make it hard to comprehend that Garrett is a human being like the rest of us. He was the top guy and still is the top guy.

For the rest of the class, some of the big names were actually a little disappointing, but that meant a couple of the fringe players had their shot to move up – and a few of them really did.

YOUNGSTOWN STATE DE DEREK RIVERS
In the handful of people who really helped themselves this weekend, Derek Rivers is near the top of that list, regardless of position group. First off, Rivers was great at his podium; he’s a humble kid who puts others before himself, but is still incredibly motivated and has high expectations of what he can do. His 30 reps on the bench, 35-inch vertical jump and 1.61 10-yard split in his 40-yard dash (4.61) proved how explosive he is. He’s a first round pass rusher.

KANSAS STATE DE JORDAN WILLIS
It’s not often that a guy comes into the combine and completely destroys all of the negative narratives surrounding him, but that’s exactly what Willis did today. Willis’ game tape showed a very athletic linear player who could explode in straight lines, but struggled to change directions and bend quickly to collapse a pocket. His 1.58 10-yard split and 39-inch vertical proved his great straight-line speed, but then his 6.85 3-cone and 4.28 short shuttle (which test changing direction and fluidity of the hips) were near the top of the entire positional group. Those numbers are going to make people go back to his game tape and see if there are hints that he had that kind of agility in him (because he does). Then it might just be a matter of coaching him to do it.

As his peers disappointed, Willis made money.

STANFORD DT SOLOMON THOMAS
Thomas was thought of as one of the top athletic big men going into Combine weekend, and he proved that he was exactly that by the end of the day.

Those numbers are all near the top of the group for Thomas. People go back and forth on whether or not he’s an EDGE player or an interior player. I think he’s more of an interior player who needs to gain weight, but regardless, teams had to like what they saw today.

TEMPLE LB HAASON REDDICK
There is not a single prospect in the entire country who has made more money since day 1 of the Senior Bowl than Haason Reddick. Reddick played defensive end, pass rusher, outside linebacker and inside linebacker during his time at Temple, and had success in every area. His best position in the NFL is at linebacker, and for a linebacker, his numbers were nearly historic. His 11’1″ broad jump tied for 3rd best among DL/LBs at the NFL Combine since 2006. That, along with his 1.59 10-yard split on a 4.52 40-yard dash means he’s just as athletic as we hoped. Don’t listen to the people who say he’s a fringe first round pick or early second round pick. He’s a solidified first round pick who might not even make it to pick No. 19.

VILLANOVA DE TANOH KPASSAGNON
Kpassagnon has been a polarizing player over the last month or so. Some people love the potential in his 6-foot-7 frame, but others are scared of it; they think it limits how much leverage he can have in the trenches. That is a concern, but what isn’t a concern is his athletic ability; he put those worries to rest on Sunday. His 4.83 40-time was great for a guy that big, and his 10-foot, 8-inch broad jump was the second longest jump all day (compared to people who weight much less than him). To have that kind of athlete in that body means Kpassagnon made money today.

ALABAMA EDGE TIM WILLIAMS
Tim Williams was pretty disappointing today. His 4.69 40 time along with his 1.66 10-yard split unfortunately makes us believe he was less explosive off the snap than he was just a snap jumper (someone who guesses when the snap count is). If he’s not the rare reacting athlete we thought he was, his troubles off the field will weigh more.

FLORIDA DT CALEB BRANTLEY
Brantley did not have a good day for his own standards. I thought Brantley would be one of the more explosive big guys today, and though he wasn’t terrible, he didn’t jump out like I thought he would. His 10-yard split came in as a 1.78, which is really all that matters for interior linemen. I thought he would have been better than that. Brantley did not stand out, but we know he can still play ball. He’s still a first rounder, in my opinion.

IOWA DT JALEEL JOHNSON
Iowa’s Jaleel Johnson was a hot name floating around draft circles for the past month or so. He had a good Senior Bowl, often looking like the best pass rushing interior lineman next to Dalvin Tomlinson and Carlos Watkins. But, on Sunday, Johnson showed how slow he was. His 5.38 40-yard dash and 1.92 10-yard split were not good, even at 316 pounds. Johnson was another top defensive tackle who failed to look explosive, even in his own right.

UCLA DE TAKK MCKINLEY
McKinley makes this list, but only because the doubts on him were solidified, not because he didn’t do well in the areas we thought he would. His 4.59 40 time along with his 1.61 10-yard split were actually great, but his agility drills (the areas of his game that were in question), proved to be shaky with a 7.48 3-cone and 4.62 short shuttle. Not a bad hit to his stock, but, if anything, today didn’t help him rise into that Top 15 conversation.

MICHIGAN DE TACO CHARLTON
Taco Charlton is slow, and I mean s-l-o-w. He’s a bigger guy, so it’s not like teams were expecting him to run sub-4.7 or anything, but a 4.92, even for a man his size is not ideal. I think that’s going to worry some teams about him, just because his 10-yard split wasn’t great either. If anyone thought he was a Top 15 pick, they probably changed their tune after Sunday.

Not a huge fan of Taco, played good in Michigan but I hope we don’t draft him, first or second round. Now if Haason Reddick would be available in the second I would like that a lot.

Surprised no mention of DE Hendrickson he demonstrated solid athletic profile markers – besting or in line with prospects who are considered legitimate first-rounders. He helped himself tremendously.

Fun to watch Jay Hayes work with the D-linemen.

Hey TS, What about Jabril Peppers? Worked out with LB’s, maybe better safety?
Any Thoughts?
Agree with David Deleon about Taco. Scratch one cool names off my cool name mock draft.
GO BUCS