Are Bucs Turning The Page On OLB Pierre-Paul?

Home » Articles » Are Bucs Turning The Page On OLB Pierre-Paul? 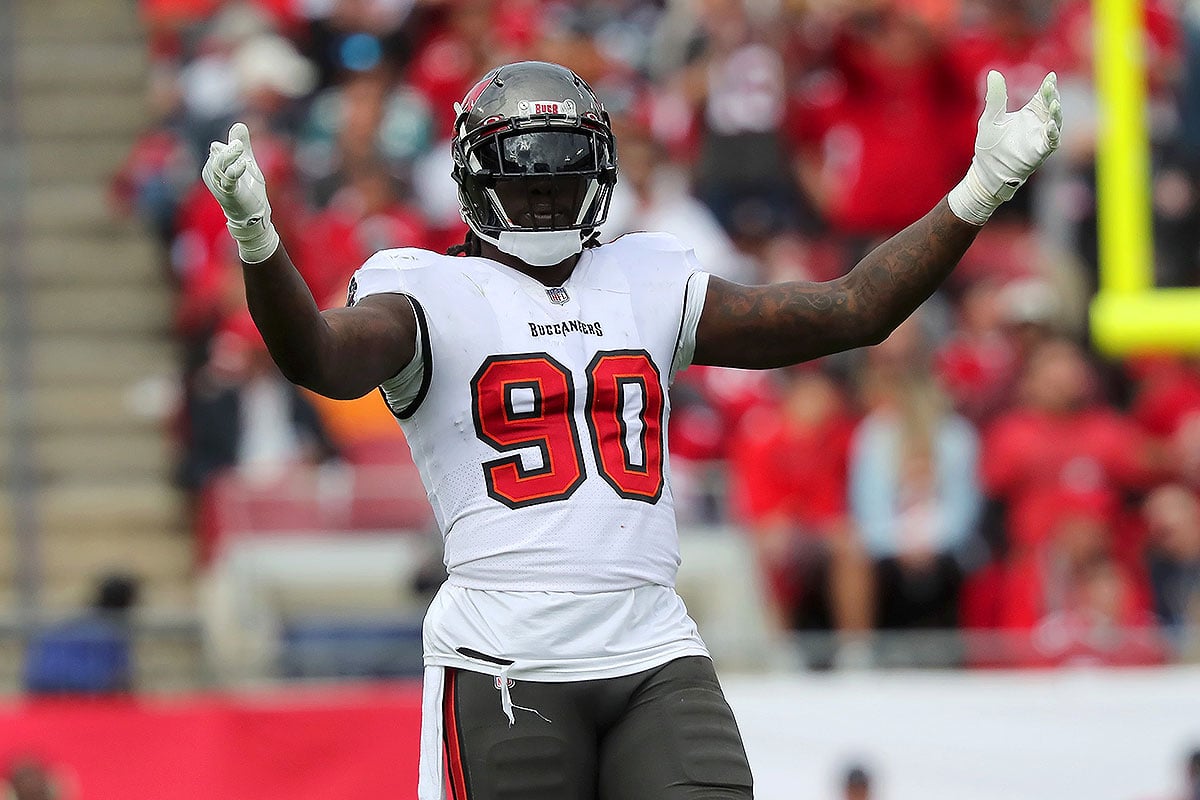 Are Bucs Turning The Page On OLB Pierre-Paul?

Home » Articles » Are Bucs Turning The Page On OLB Pierre-Paul?

The Bucs kicked off day two of the NFL Draft by selecting Houston defensive lineman Logan Hall. A few hours later, the Bucs announced Hall would be wearing No. 90 in Tampa Bay.

For the last four seasons, edge rusher Jason Pierre-Paul has worn that number. The veteran is currently a free agent after rehabbing offseason shoulder surgery for a torn rotator cuff. Could this spell the end of Pierre-Paul’s time in Tampa Bay? Pierre-Paul was oft-injured last year, playing through his shoulder injury and a fractured finger before being shut down for the final few games of the regular season. He came back for the playoffs, but his performance suffered all year due to the injuries. Yet the Bucs continued to play the veteran edge rusher over rookie Joe Tryon-Shoyinka.

With Tryon-Shoyinka poised to step into a starting role, Pierre-Paul will likely look for a new team where he can compete for a starting job. The Bucs traded a third round pick and swapped fourths with the Giants in 2018 to acquire JPP. If Pierre-Paul doesn’t return, he’ll end his Bucs tenure with 160 tackles, 55 for loss, eight forced fumbles, two interceptions and a Pro Bowl nod. The 33-year old is currently tied for sixth in Tampa Bay history with 33 career sacks. He was instrumental to the Bucs’ Super Bowl victory and changing the culture in Tampa Bay.

J.C. Allen is one of PewterReport.com’s newest beat writers. As a New England transplant, he has closely followed Tom Brady’s entire career and first fell in love with the game during the Patriots 1996 Super Bowl run. J.C. is in his second year covering the team after spending a year with Bucs Report as a writer, producer and show host. Some of his other interests include barbecuing, being outdoors, and spending time with family and friends. His favorite Buccaneer of all time is Simeon Rice and believes he deserves a spot in Canton. Follow J.C. Allen on Twitter @JCAllenNFL.
Subscribe
Login
Please login to comment
12 Comments
Oldest
Newest
Inline Feedbacks
View all comments

One of the great Personel decisions by Licht. JPP has been a big part of turning the Bucs into a Superbowl Team. No matter what happens, I have enjoyed watching him play and making our defense ferocious.

It’s one thing to draft an heir apparent, but when you give the new man the old man’s number, it’s a done deal.

We thank JPP for his contributions to the team and wish him luck in the future.

I remember when JPP was at USF being overshadowed locally by teammate George Selvie. The NFL knew better. Imagine that. Sadly, the old warhorse is probably at the end of his stellar career. I had no delusions of him returning at the salary he would likely demand. Age catches up to every player. Injuries make that eventual decline even quicker. He’ll be missed.

JPP is my all time favorite. Thank you JPP!!!!

I wish you the best JPP; appreciated you. Would love for you to be a rotational guy, but not at the Salary you may believe you still deserve; same for Gronk and Suh. We are in salary cap hell in 2023/2024/2025 unless we start now to reduce the payroll.

The future is now. We aren’t going anywhere with Kyle Trask anyway.

And some say Scottie Miller is a one-trick-pony.

Great player and trade for Bucs. Will come down to money if he comes back or not. I have no doubt if healthy he has some gas left in the tank, but may be out of Bucs price range for sure.

Loved you because of everything you brought, JPP. I wanted the Bucs to draft you out of USF. Thank you, thank you, thank you!
I think Licht made one of the best trades in Buc history when he traded for Jason Pierre-Paul. I hope he feels like coming back for another ring this year. I doubt that money would be an issue. I suspec that the “alpha male” might want more playing time than Bowles would give him at this point, though.

I was hoping the Bucs would sign him to a reduced contract and use him pimarily as a rusher. I know it takes awhile for pitchers to rehab from rotator cuff surgery but don’t know how fast football players can come back from the injury. I know I injured my rotator cuff and I can’t lift anything over 50 pouns over my head without pain. Even so, not a lot of class giving his number away without a pause.

They should wait until the body is cold before giving away his number. Have some respect.