Arians: “Sad The Way It Happened” With Antonio Brown Arians: “Sad The Way It Happened” With Antonio Brown

Bucs head coach Bruce Arians appeared on the Pat McAfee Show this week, so you knew some headlines were coming. Sure enough, McAfee asked Arians about coaching Antonio Brown over the past two seasons. The 69-year old coach was quick to praise the veteran receiver on the field, expressing disappointment over how things ended.

“Not at all,” Arians said when asked if he was surprised about how good Brown looked in 2020. “Knowing Antonio, nobody works harder than him. He’s always in great shape. Skill set is unbelievable. He’s one of those guys who doesn’t age.”

Unfortunately, the positive vibes didn’t last long. Brown famously removed his equipment in a fit of rage in Week 17 against the Jets, disgruntled over a perceived lack of targets. Arians revealed Brown’s pending release from the team after the game. Since then, the receiver has attempted to make a case that the head coach pressured him to play through injury. That argument has been shot down by Arians and Mike Evans, who claim Brown was upset about not getting targeted more. 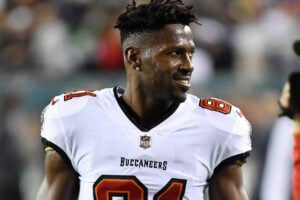 “It’s all about winning and what’s best for our team,” Arians said about acquiring Brown. “He was a great fit for us because Mike was hurt, Chris was hurt. AB came in, they got healthy and we were lights out. This year, everybody got hurt again. AB got hurt. It was sad the way it happened. But it happened.”

We won’t hold our breath. Meanwhile, the Bucs search for an Antonio Brown replacement continues this week at the NFL Combine. Could Ohio State wide receiver Chris Olave be on the team’s radar? The Bucs could have a slew of talented options to choose from at No. 27 overall in the draft.

"Nobody works harder than Antonio Brown & I was sad the way it ended but it happened" ~@BruceArians#PMSLive pic.twitter.com/Q7lCmaJHyU

I think it’s all been said already in terms of AB and his mental state. No human alive would not be able to see/say that this guy has major issues. Good football player, terrible human being.

Brown is fighting demons that he can’t control. The first is his brain and the second is his mouth.