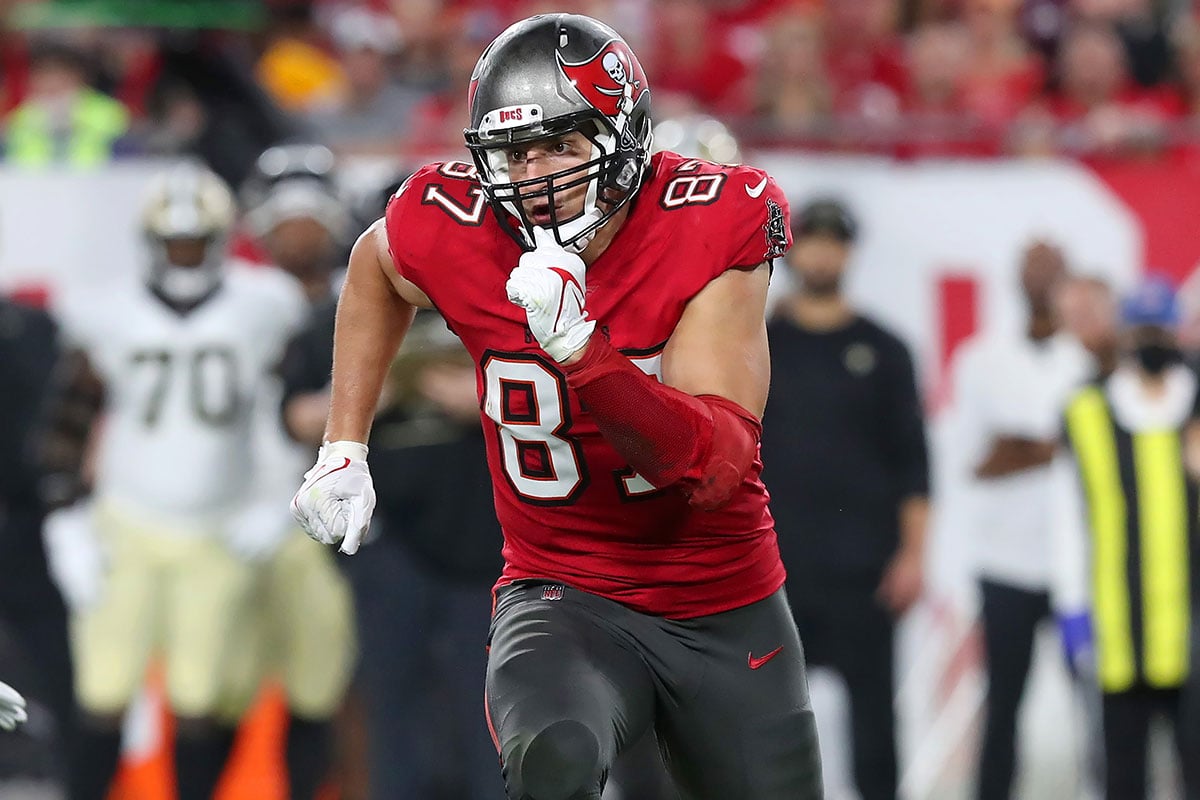 According to reports coming out of the Combine, the Bucs won’t be the only team vying for Rob Gronkowski’s services. Per The Athletic’s Tim Graham, the Buffalo Bills are reportedly interested in Gronkowski. The future Hall of Famer will be a free agent in a couple weeks. There is still no official word on whether Gronkowski wishes to continue playing football.

Bills interested in adding Rob Gronkowski as another weapon for Josh Allen https://t.co/HvcI9oIKus

The Bills are obviously an ideal landing spot for Gronkowski if he does want to keep playing. The 32-year old grew up in Buffalo, and likely wants to join a contender. Few teams are better positioned for a run to the Super Bowl than the Bills. Gronkowski would fit alongside emerging stud Dawson Knox quite nicely, perhaps acting as the final piece for a thriving Bills offense.

But don’t expect Tampa Bay to go without a fight. The Bucs are very interested in retaining Gronkowski, and the tight end is working out at the team’s facility twice a week.

“We’ll be talking to Rob’s agent here,” Bucs GM Jason Licht said on Tuesday. “Rob just wanted a little time to think about his future. But, once again, he’s another great player at his position. So, I’d be excited if he wanted to come back.”

Meanwhile, Tampa Bay remains committed to re-signing as many free agents as possible. Obviously the Bucs have several priorities, but their tight end room is fairly barren. Former first round pick O.J. Howard is also a free agent, leaving just Cam Brate on the roster. Of course, Tampa Bay could also use their draft resources to find their future starter at tight end. The Bucs have met with a host of tight ends in Indianapolis this week.

Not sure in this “Brady-less offense” if paying Gronk $9mil is really worth it. BA’s offense uses the TE most the time like an extra lineman staying home to help block for these long developing routes. if it were not for Brady’s comfort level while playing in this offense Gronk would have been Cody McLeroy a wasted talent

I think these types of articles are stupid and hurt the fan base. Brady retired, and Gronk is a free agent. These players made their own decisions about their futures. Nothing that the Buccaneers management could have done reserves it. Some of the Pewter reporters too focused on the last two years. Even with Gronk and Brady, the vast majority of their free agents were not returning. The Buccaneers would almost no cap space to replace them with others. Trading for a Veteran QB is too expensive. Maybe a lesser Veteran becomes available. Russell Wilson, Aaron Rogers, and DeShawn Watson… Read more »

lets be serious, he has a much better chance of getting a ring with the bills, if thats what he really wants

He isn’t priority because Bucs cap realities, and feel Godwin an absolute must sign even franchising him if necessary then WR3 remains huge, which will require our 1st rd pick, or free agent who is proven player. TE just not impt. as receiver in BA’s offense, making the great Gronk not worth 10k or greater. Too MANY MUST signings, 1. Godwin, 2. QB, 3. Carlton Davis, 4. WR3, 5. Gholston, 6. Jenkins and/or Cappa, 7. J Whitehead, 8. Suh, 9. DE, 10. TE, 11. DT, and others… Will be interesting to see free agent additions, draft picks, and make up… Read more »

PR gave up their actual reporting a couple years ago, and now just engages in endless gossiping. Get back to actual news, actual interviews with the principals who have a say. Analysis is good too. But enough with the speculation and rumors.

Wouldn’t the cold weather of Buffalo intensify the pain from both past and current injuries?