Auclair’s Bucs Training Camp Diary: There Is No Pressure Auclair’s Bucs Training Camp Diary: There Is No Pressure

There Is No Pressure
By Antony Auclair as told to Scott Reynolds
I’ve played in two preseason games now and it was an awesome feeling going out for my first preseason game. I was on the opening kickoff in Cincinnati, so I got to play on the first play of the game, which was great. I was a little bit anxious, but I feel like I had a great game. I actually think I played better in that game than I did last week in Jacksonville. Blocking-wise I was better in Cincinnati. I did a good job in Jacksonville, but sometimes my angles in that game weren’t as good as they were in the first game.

On a third-and-short play against Jacksonville I took a bad angle and missed my block. I think my guy made the tackle, but you have to move on to the next play. That’s how it is. You have to forget the last play and move on, which I did. We went for it on fourth down and I had a much better block and we made the first down.

I did make my first catch in Jacksonville, which was really cool. It was third-and-9 – a pressure play, and Ryan Fitzpatrick threw a low ball and I made a nice catch for nine yards and the first down. I was really happy about that. My game wasn’t perfect, and it wasn’t as good as the first one. I had a bad taste in my mouth after our last game. 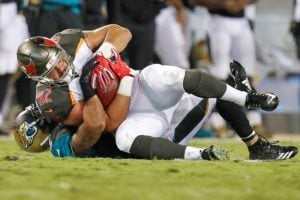 My roommate, Sefo Liufau, is now getting some playing time with the unfortunate injury to our backup quarterback Ryan Griffin. That’s how this game is. The next has to step up and he’s doing really well. He didn’t have many reps in practice at all and then in comes into the Cincinnati game and balls out. He’s doing great and I’m happy for him.

I’m always working with Fitzpatrick on the second team and I think we are really connecting right now. We’re getting better together and I’m really excited about that.

Everybody in our tight ends room is really good. I mean they are all good. It’s a good fighting group. Everybody competes hard and I can really learn from these guys. I have to compete every practice. It’s super competitive. With this heat, it’s really hard, but you have to grind every day. Training camp is a hard grind. I’m getting used to the heat, but sometimes it’s really hard to breathe. I’m glad we’re playing some night games in the preseason because this weather is crazy down here.

The fourth preseason game is where I will see a lot of action, but there’s no pressure on me. Football is fun. This game is fun and we play the game because we love it. There’s no pressure, just play and have fun.

I really enjoy blocking and there’s only so much we can do in practice because it’s not like a game. I’m a physical player and a physical tight end and that shows up in the games. Where I have to improve is route running and I think I’m doing a better job at running my routes. I still have to get better, but I have to improve there. I also still need to work on my blocking, especially the right angles, which I didn’t do great in Jacksonville.

The speed of our linebackers here in Tampa Bay is fast and I thought they might be the fastest, but I think everybody in the NFL has fast linebackers. The ‘backers in Jacksonville were also really fast. But going against our guys in practice is making me better on my cut-off blocks. They are fast, so I have to take better angles and that’s what I’m focused on.

Our next preseason game is at home – finally – at Raymond James Stadium down the street. It’s going to be awesome. I’m looking forward to it playing at home, but I haven’t really thought about it until this week because I’m focused on the next practice. But it’s going to be great running out of our tunnel with our fans there.

Auclair’s French-Canadian Phrase Of The Day
I’m also going to teach you some French-Canadian in my Bucs Training Camp Diary on PewterReport.com. Here’s today’s phrase is “Où sont les toilettes s’il?” It’s a French way of saying, “Can you please tell me where the restroom is?” in English. After “What are we eating?” that’s the second-most important phrase!

This kid has a great attitude. Says a lot about his character that he still came down here after we drafted OJ. Our TE group has to be tops in the league. Our multiple TE sets could be unstoppable.

Hopefully he is learning enough so he’ll be able to contribute next season.