The recent retirement of Tom Brady is only one of the Bucs concerns this offseason. The Bucs also have 10 free agent starters they’ll attempt to re-sign, including five on offense. One of those five is center Ryan Jensen, whose four-year contract will expire this spring.

Jensen has been a key part of the Bucs cultural transformation in the trenches as a tone-setter. His first Pro Bowl nod came this season, after years as one of the NFL’s most physical players. While in Las Vegas for the event, the Bucs team website caught up with him to talk free agency. There’s a common thought out there that Jensen is less likely to return because of Brady’s retirement. However, the veteran center shrugged off that idea.

“I don’t think that’s a huge factor for me right now,” Jensen said when asked about Brady’s retirement. “I’m just kind of riding through the waves and whatever happens, happens. That’s kind of how I’ve always been. So I’m not too worried about looking into that at this moment. I’m just excited to be here and getting to enjoy the Pro Bowl with some of my teammates.” 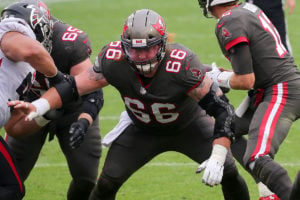 Jensen will be 31 in May, which makes his free agency complicated. He’s one of the best centers in the league, and is currently making about $10.5 million per year. It’s reasonable to believe Jensen’s next contract could represent a raise, or at least a similar rate to his last deal. Would the Bucs be willing to pay that for an aging center, especially with the other free agents they want to retain? Keep in mind, the team is already paying high level money to Ali Marpet and Donovan Smith. At some point, Tristan Wirfs will re-set the market at his position too.

Jensen hasn’t missed a game since 2016, starting 81 straight contests. But he’s played through several different injuries over the past two seasons. The track record for signing older free agent offensive linemen is troubling to say the least. Eventually, there is concern Jensen’s grueling style of play will take a toll on his body. But Jensen is a key leader in Tampa Bay’s locker room. If the team can retain him without breaking the bank, they’ll try to.

I think you have it backwards. It isn’t a question of whether it was a huge factor for Jensen. What’s up in the air is if, with our cap restraints and the other important free agents we need to sign, Brady’s departure makes signing a 12 million per year center more of a luxury than a necessity. We definitely have to sign Godwin, Davis, and Whitehead. With Suh’s probable retirement we’ve gotta sign Gholston back. Everyone wants Lenny back for the right price. So, with all that and Hainsey the heir apparent, do they really want to pay Jensen? I… Read more »

I got another team offering playoff Lenny bigger cash. Suh is a hired gun and will go where the cash is. Jensen luvs Tampa. He will be back.

So, if Jensen is back, who goes? He’s a great player, but I put him as 5th in order of priority. Godwin Davis – gotta have pass coverage, D needs to improve Whitehead – gotta have physical safety, D needs to improve Gholston – because he’s inexpensive and our DL is thin Jensen – could be replaced by Hainsey And if Gronk wants to come back, I’d put him as higher priority than Jensen. Seriously, tell me how we afford or 12 million dollar center with all these other priorities… If you think keeping a high priced center is more… Read more »

I beg to differ. AB was the hired gun.
Suh is a professional athlete who has been having a great time in the twilight of his career including getting that elusive ring. (He has set himself up to become super rich after he retires from football. He has also only started his family in recent years by the way.)

Players generally don’t leave NFL teams because someone else offers more money.- they usually are cut by the teams who have a higher priority elsewhere in building their rosters, and if they resign elsewhere, even for more money, that is not really the player’s choice most of the time. Every team plays under exactly the same salary cap. It is rare these days for teams to overpay running backs who are on a second or third contract, because the expectation is they will age out faster than any other position on the team. And because in the market place, quality… Read more »

Our cap restraints are grossly overstated. The Bucs are in the middle of the pack as far as cap space, and year after year, the Bucs front office spends most of the cap and puts out a pretty good product, at least as long as the starting quarterback is not throwing nearly as many passes to the opposing defense as he is throwing touchdowns for the Bucs. We fixed that two years ago, and now we need to maintain that fix.

Make it happen, Jason. He’s too valuable to the team.

For us fans to speculate on money matters and cap space is an exercise in futility. Jason Licht knows who he wants to keep and whether the dollars make sense to bring each free agent back. He worked magic in bringing every starter from the Super Bowl back, so I know he, his staff, and AB will do what’s in the best interest of the team.

We fans have virtually no idea about the player’s salaries and the mystical salary cap. Yet fans, who probably can’t cipher as well as Jethro Bodine, weigh in on what Licht and staff should and shouldn’t do. Here’s what I know………..they’ll figure out the $ for the players they want.

I agree, and I love the Jethro Bodine ciphering reference.

The Bucs have probably the best front office in the league these days, with respect to all aspects including drafting, free agent signings, trades, and salary cap management. So yeah, no need to go into all the handwringing. I do expect the Bucs want to keep Jensen at center, because he is one of the best in the league and no matter who is under center, you want a good one snapping the ball and lead blocking in the center. I don’t imagine either that Jensen wants to leave either. But it’ll be up to the front office to work… Read more »

The Bucs aren’t rebuilding here, they’re retooling. They’re going to try and sign a lot of these players they can, and add the right pieces to go with them. The only way they’re going to lose some of the these guys is if someone comes in and beats them out for less money, or they retire. And maybe, just maybe, they go play somewhere else for a lot more money. To go far in the playoffs, you need a solid O-Line, and the Bucs know that. Jensen is the type of player BA likes, he’s not going anywhere.

Sorry bro! To go far in the playoffs u need a solid defense. U can have the best offense in the world, if ur defense can’t stop anybody… we’ll then u got problems. Just saying.

Shout it out for the guys in the back who refuse to hear this.

This post and Dude’s comment was solely directed at Jensen and his position on what was the best pass blocking offensive line in the league the last two years. It was not a comment on the relative value of defense.

And as to the Bucs defense, it was the 5th ranked defense out of 32, despite being decimated by key injuries all season long. We don’t have anything to fret over with this defense. Rather, the question is what it will take to go from 5th to 1st.

R u kidding me right now nipples? Nothing to worry about with this Defense? This Defense got us knocked out of the playoffs! Is there a QB that didn’t throw for 300yards against us this year? Just stop with that nonsense. Defensive Backfield was suspect all year long. Put it this way, if u don’t get some free agent talent in the defensive backfield this year then it really won’t matter who is under center! Get a grip man! U remind me of the Liberty Mutual commercial when the animal has his head in the sand. There won’t be a… Read more »

You must realize that, in spite of the seemingly unending injuries to the secondary, the Bucs were still a top ten defense with regards to scoring.

So ur cool going with the status quo with this defense? I don’t care where they were ranked. I know that almost every QB threw for over 300 yards against us. Also, that ferocious run defense started to go down hill once BA said Nobody runs on us. We have some aging vets that need to be replaced as well. Resign Davis and Whitehead and bring in a vet DB or two for competition. If ur not improving ur falling behind.

I don’t get the mentality that even poses such questions as Ledyard and other media wonks put forth: Now that TB-12 is retired, are you ready to jump ship on the Bucs, or retire, or shoot yourself in the head, or what? The team is called the Tampa Bay Buccaneers, not the TB-12s. The franchise has existed since 1976, with no end in sight. Players always come and go, including the supposedly “irreplaceable” players who somehow, someday, get replaced. I cannot imagine that Jensen wants to leave town because TB-12 is retired. It may be that he and the Bucs… Read more »

It’s cheaper to keep Cappa, and let Hainesly be a Center. Also sign Stinie and Leverrret. I do not feel Wells worth sining; he’s 28 and time to move on . Sorry about the spelling of names

I’m sorry but Ryan Jensen needs to be brought back. If he is not this Oline will not be what they have been the last 2 years. He’s the heart and soul of this line and with his fierce mean attitude the rest of the Oline feeds off of its. He sets the tone up front and brings the pain play in and play out. He’s one of 3 or 4 players I see as must haves for the Bucs and Ryan has to comeback or this line will be way worse than you all think.