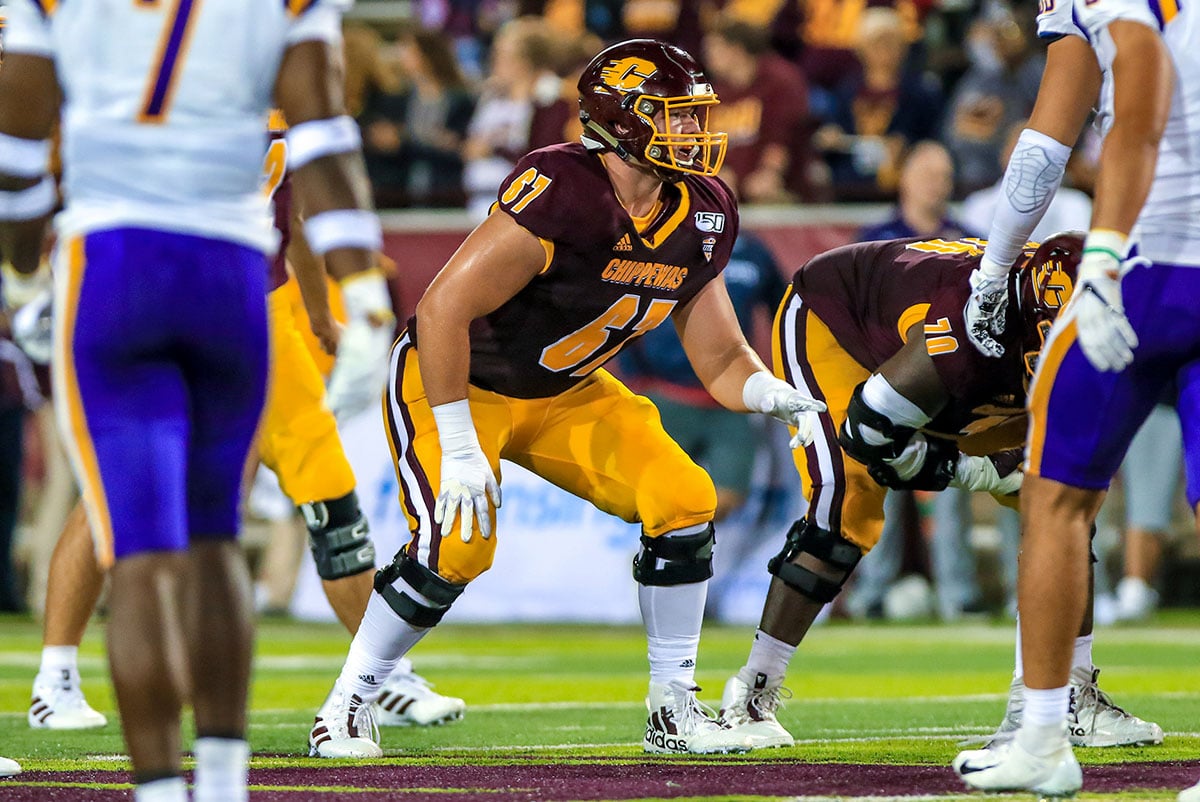 In a surprising move, the Bucs traded up in Round 2, moving up to the Bills spot at No. 57 from No. 60. With the 57th pick, the Bucs selected Central Michigan offensive lineman Luke Goedeke. The redshirt senior played right tackle for the Chippewas, but will likely move inside at the NFL level. 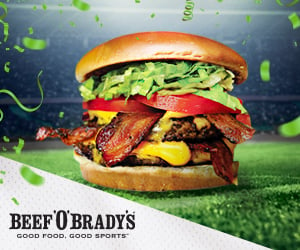 The Bucs traded their 180th pick to move up and draft him. That was the sixth rounder they got in the trade with the Jaguars to move out of the first round.

Goedeke, 23 years old, will immediately compete with Aaron Stinnie, Robert Hainsey and Nick Leverett at left guard. He began his college career as a tight end at UW Stevens-Point

Goedeke  was a tight end who converted to tackle in college. His calling card is his above-average strength. This helps to give him a high floor as a run blocker. He moves well, allowing him to be an asset on traps and counters. Goedeke is the definition of a guy who won’t on a rep. This allows him to recover more often than most.

He can be slow to set which allows bull rushers to gain leverage and bully him. Goedeke profiles as a high-upside project who will need to work on his pass protection to become a long-term stalwart on an NFL offensive line. He has been shooting up draft boards and could be taken as high as the second round, but more likely somewhere in the third.

Another good pick. 2 for 2 for players in the trenches so far.
OL/DL units overall are going to be much improved heading into 2021.

Huh, what. The Bucs must not have much faith in the guys who are supposed to battle it out for Marpet’s spot of why draft this guy. Would much rather have seen them use that sixth round pick to move up and get that TE or that DE from Missisippi who had 12.5 sacks last year. Typical Cowboy move though. No matter what character issues the guy might have they will take him if there is excellent value.

I never bought the hype around Leverett or Stinnie being shoe ins to start. They have to beat out Hainsey and also now Goedeke to start.

Stinnie has to beat out Hainsey? More like other way around. How many games has Hainsey started? 0.

Why ? Why is Nakobe Dean dropping.

I have no idea but I would have liked him instead of Goedecke.

No shit. Dean is a top 15 player in the draft, and was there at 55, and instead we reach for an OT who wasn’t even the best available OL on his own team. Ugh

That’s why you aren’t an NFL General Manager. Obviously all the NFL GMs disagree that he was a top 15 player if he’s still there at 55.

So from what I just read, we have two average pass blockers on Brady’s blind side. No Marpet to help support Smith this season. More dazzling brilliance from Licht.

Always love the trench picks but was not expecting this. I kinda hoped they were gonna double up on the DL by taking Travis Jones or Drake Jackson. Pretty surprised about Dean falling that far, obviously a reason and maybe he is too small or not great but that seemed like a nice option as well

With the typical 8 or 9 guys on the offensive line, between retirements, aging out, injuries, and free agency take-aways virtually all NFL teams need to replace at least 2 offensive linemen every season. At least. Ditto on the defensive line.

Didn’t see this coming. I want to say WTF but instead I’ll say in Jason Licht we trust.

In JL we trust.

Why trade up for this guy? We needed that 6th rd pick.

Nobody ever “needs” a 6th round pick, except as either a training camp body or to trade away for something better .. like this trade.

Ugh come on this is just a repeat of last years draft, why are we trading up for a project OG/OT, we passed on impact RB and have yet to address the years long weakness of the secondary. One would think if you were just going to draft depth you might actually address a weakness like the back end.

The “years long weakness of the secondary”? Oh you mean when our top 3 DBs were out for extended time injured, Shaq & JPP being injured off & on, with JPP lookin like a shell of himself even when he played. Even Devin White & Lavonte missed games or were limited due to nagging injuries, literally the story of the Bucs season last year. Yeah, gee, I can’t imagine why the secondary struggled? Almost no pass rush and our starters were down to our 4th & 5th best CBs for a time due to injury. But I doubt that had… Read more »

Last edited 24 days ago by flichter

Seems a lot of people ignore those facts you presented because it doesn’t fit their narrative.

Yeah, our secondary was so so weak that our defense was the fifth ranked defense in the NFL. Man o man, that just sucks horribly, doesn’t it?

You guys just slay me.

There’s nothing that’s negative about our two selections; they are good pics and can help us now and in the future. So far we have had a solid draft.

I was hoping for DT Travis Jones with this pick but like adding depth to O line.

No dude who is a “project” is immediately competing with Stinnie. Like the pick, though. Licht LOVES him some small school linemen and he’s been right all along. Don’t think that’s Licht’s doing all by his lonesome, but whomever is the shot caller on OL picks, is pretty damn good at finding value in small schools and later rounds.

This is NOT a good pick for the second round. NO ONE wanted him so why did we give up a draft pick to move up to get him? No sense in this pick and no reason to trade up to get him.

Ok, we replaced Cappa with Shaq Mason, which is a clear upgrade. So in other words, we just lost Marpet. 60% of our OLine are pro bowl caliber in Wirfs, Jensen, and Mason. I think that’s plenty good enough for Brady, who, even at 44, had the 2nd fastest time to throw in the NFL last year. I know some of you like to make it seem like the sky is falling on the OLine. But let’s be real, it’s not. We didn’t need to trade up for this guy. Would have much rather they took Reimann over this guy,… Read more »

Last edited 24 days ago by Dave

And you know this how? I really doubt you have any intel on the other 31 team’s draft boards.

Thank you Bill Belichick – the only GM with a better record for the last five years than Jason Licht.

Or aren’t you Bill Belichick? Sorry, I mistook you for someone who has proven to be in the same league, literally, with Jason Licht.

I’m not going to talk negative the pick but of course Licht wastes a pick to draft up. Only 3 places for an OL that was the 2nd best tackle on his team and the other tackle went 40 picks later.

Is your goal to acquire good players or more picks?