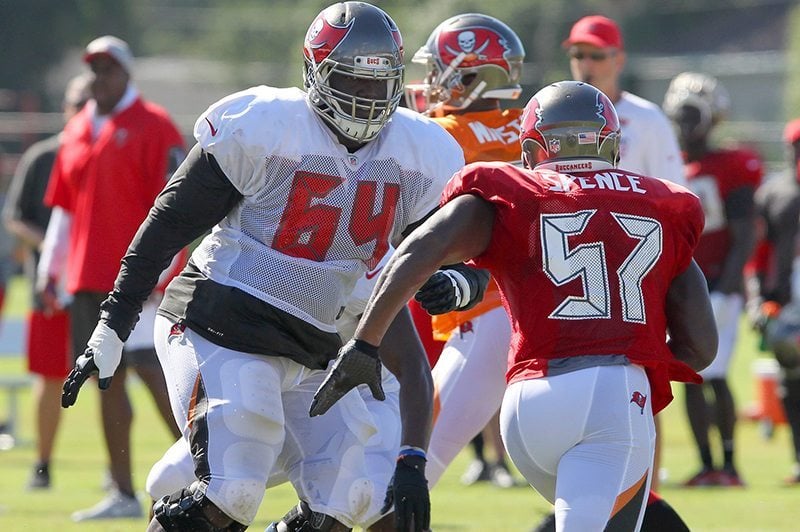 Noah Spence is on a mission.

Coming off the field in Tampa last week before the first preseason game, I casually and jokingly mentioned to him about fellow defensive end Robert Ayers’ prediction of 15 sacks from earlier this spring. Spence looked at me with a somewhat scary look in his eyes and said something unprintable.

To paraphrase for this family-friendly publication, Spence basically said, he isn’t concerned with anyone’s predictions of his play. He knows what he has to do, and plans on doing it.

Whether 15 sacks becomes a reality or not, if Spence stays healthy, taking the over on his 5.5 sacks from a year ago, seems like an almost sure bet.

This week in Jacksonville, the slimmer, even faster Spence was on display. And while he is an excellent speed rusher, Spence has spent the offseason and early part of camp, planning and working on counter moves. Having two working shoulders most certainly helps as well. Spence was the star of the defense over the last two days for the Buccaneers, and he matched every bit of the intensity of the Jaguars who seemed to be the more driven of the two teams, especially on Monday. Tuesday was better overall for the Bucs, but Spence had his motor humming both days and it was easy to notice No. 57 every time he was on the field.

#Bucs DE Noah Spence is having a great week in Jax. pic.twitter.com/UcPyf3S5LP

Spence was the Bucs best pass rusher in the 1-on-1’s on Tuesday and displayed a nice inside move on the clip above.

“Well, he’s still learning,” Koetter said. “He’s just in his second year, he was a part-time player last year, so I think Noah’s just continuing to learn and develop. He’s worked on his body. Noah’s a ‘motor’ player. That’s his strength is his motor, more than anything else. They can talk about quickness, size, speed, toughness but the guy gets by on having a great motor. I think his game is going to show up as a game wears on more so than just a three or four-play set.”

For Bucs fans waiting to see the team’s first double-digit sacker since Simeon Rice, Spence appears to be primed for a breakout season.

I don’t care if Noah Spence records 15 sacks, or 10 sacks, or any other number of sacks, which are only the tip of the iceberg in a good pass rush. I care a great deal that our pass rush is effective, and if all of our D-linemen recorded only 7 sacks each, but 25 QB hurries and hits apiece, a the result is a whole lotta busted up pass plays, INTs by our DBs and LBs, and quarterbacks who rue the day they have to play the Bucs D, then I’ll be ecstatic.

If this guy can produce at that level the rest of the line will benefit, as will the D backfield. Would be nice to have a guy that can make that 3rd down sack in the 4th quarter the Simeon Rice did. We haven’t had anyone on our D line do that since.

15 sacks would be great but I do not see that happening this year . 9 to 11 this year i think is more realistic. I hope I am wrong and he does get 15. Go Bucs