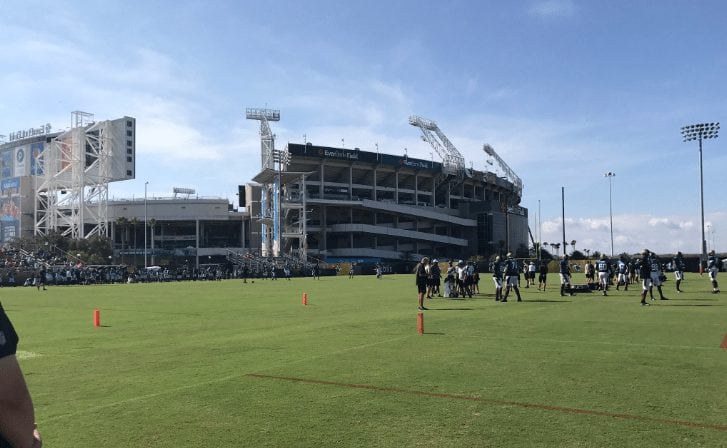 What do you get when you take two franchises that have been losers for a long time, ones that both finally have what is probably their most talented squads in quite some time, throw them in the mid-day Florida heat and pin them up against each other?

Former #Buc Arrelius Benn getting into it with #Bucs LB Ardarius Glanton. Teams had to be separated. Third scuffle of the day. pic.twitter.com/wMhHilU37C

And there was a third one between Bucs safety Chris Conte and Jags wide receiver Allen Robinson, too.

On a day that followed Buccaneers head coach, Dirk Koetter, telling the media that he was disappointed in the effort and energy he saw from his team on Monday, the emotions and the sparks was certainly there on Tuesday, as was evident above.

But, some of that energy was used for making play for the Buccaneers, and not just getting into scuffles.

Hargreaves would not have done this last year. Confident and aggressive. #Bucs #Jags #Gators pic.twitter.com/xakvby3BSF

Vernon Hargreaves had a very busy day. He had some good plays (one shown above) and some that he wishes he could get back.

In the play above, Hargreaves’ second-year confidence was on display. A year ago, Hargreaves would not have been precise enough to make that kind of play; he just wasn’t as sharp because he was learning so much.

Just like we saw with his interception in the Bengals game, similar confidence in the play above led to what should have been another pick for him (he’s had many in camp).

But, it wasn’t all sunshine for the Bucs defense. In fact, there were more miscues and mess-ups than they would have liked.

One example was in the play of cornerback Ryan Smith. Smith is a first-year cornerback in the NFL, and though he’s showed flashes of ability, being consistent is different. The Jags picked on him a lot today, and he seemed overwhelmed. Much of that can be encapsulated in the play above where he just guesses and gets burned bad.

There will be up and down days with Smith as a first-teammer with Grimes out. Today was one of the “not so good.”

#Bucs DE Noah Spence is having a great week in Jax. pic.twitter.com/UcPyf3S5LP

Bucs defensive end, Noah Spence, has been building off a strong first preseason game with now back-to-back solid practices here in Jacksonville. Yesterday he showed some flashes of good play off the edge, and today he showed even more, particularly in the one-on-one drills where he could hardly be handled by any Jaguars offensive lineman.

Gipson and Church communicating in presnap 7 on 7 nickel coverage. Winston still successful with a TD pass to Mike Evans. #Jaguars vs #Bucs pic.twitter.com/sRh6v9MhCD

It was a relatively quite day for the Bucs offense (partially due to the video regulations the Jaguars have on what you can and cannot record).

The play above was probably the highlight of the day. Over the last few weeks, Evans has played well, but has still had little slips of focus with drops and precision. However, today, after the first scuffle with the offense and the Jags defense, it’s like Evans had a fire lit underneath him. He caught every ball thrown his way – and a lot were thrown his way.

On a side note, not a great day for now confirmed second-team quarterback, Ryan Fitzpatrick. He threw two picks in practice, and should have thrown a third that was batted instead of caught.

Robert McClain on Allen Robinson. Plays him well, ball thrown too far out of bounds (unfortunately for one man too close to the sideline) pic.twitter.com/9iBQd0Iq03

Though it didn’t exactly have anything to do with the Buccaneers’ practice progress, the most memorable video content of the day goes to the clip above.

Jaguars’ wide receiver, Allen Robinson, was in a one-on-one drill with Bucs cornerback, Robert McClain. In it, Robinson took McClain to the end zone, but the ball, thrown by Jaguars quarterback, Blake Bortles, was overthrown and out of bounds.

But, that wasn’t why this video went viral. For that, you’ll have to listen to what Robinson said of the pass from his quarterback after he got up.

That’s all for the joint practices this week (which is good, because if another one were to happen, they might kill each other). Next up is the preseason game between the two at EverBank Stadium on Thursday night – where the real hits can occur.

Man, that Robinson clip is damning. Bortles is done, man. As a UCF alum, I hate to say that, but he is. He’s lost the confidence of the coaching staff, and he’s clearly lost his teammates. Done.

They will ride it out one more season with Bortles because Henne isn’t a spring chicken.