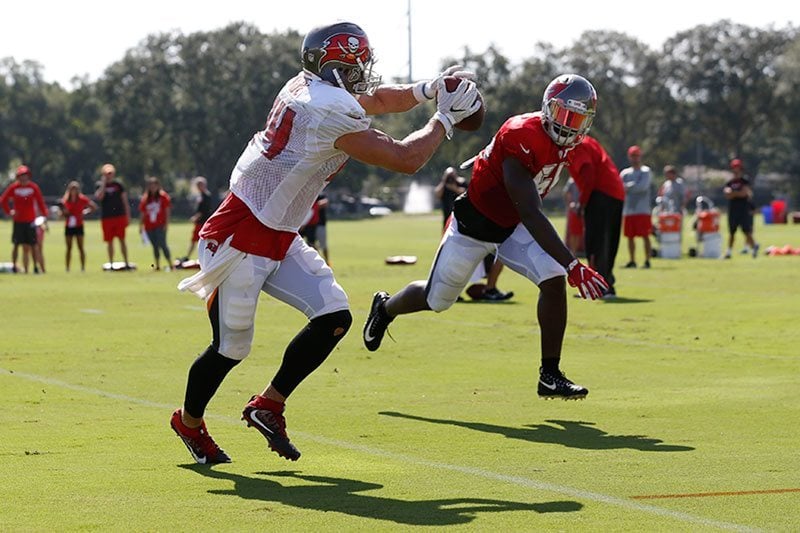 The Bucs players were in full pads today for the first time since their preseason win versus the Jaguars on Thursday – yesterday they were in shells.

The inactive list read a lot like it did on Saturday. Peyton Barber, Caleb Benenoch, Demar Dotson and Kevin Pamphile were still wearing their bucket hats with no pads. In addition to yesterday’s roster moves, the Buccaneers announced they signed cornerback Mariel Cooper and waived running back Quayvon Hicks. This is likely due to Jude Adjei-Barimah’s knee injury.

Winston to Brate with Beckwith in coverage. Perfect pass and a nice grab. Nothing Beck could do. pic.twitter.com/JA3XutxODH

The whole two tight end movement isn’t just something we talk about in theory. The Buccaneers are actively working on the best way to get their tight ends involved as mismatch possibilities in the passing game.

The play above is all but impossible to stop when executed the way it was. Cameron Brate is just too athletic for most linebackers, and when the pass is that perfect, there’s no stopping it. Brate and Winston work one-on-one every day after practice, and that’s why you see that kind of chemistry with ball placement.

If OJ Howard runs this route one-on-one, the defense loses – every time. pic.twitter.com/wMuMjtEpUs

But the whole idea behind two tight end game plans is that it doesn’t stop there.

At about the middle mark of practice, the linebackers and safeties went through one-on-one drills with the running backs and tight ends. This is a heavily favored offensive drill, but the clip above still works as evidence for how difficult it is to stop an athletic tight end.

In it, tight end O.J. Howard was up against safety Keith Tandy. If you watch it, Tandy didn’t even have time, or the chance, really, to even guess or hope to stop the catch. Howard is too versatile.

Cam Brate again. This time on the goal line. Too easy against man coverage. pic.twitter.com/tpIlpxadMU

Later in practice, the two tight ends were at it again, this time on the goal line. The Buccaneers’ first team offense has been very effective to start the last two preseason games, getting in scoring distance in every first quarter drive.

But, there have been more field goals attempted than touchdowns, and that’s what this team is trying to change.

If Brate gets one-on-one with man coverage, Winston will find him (as shown above).

Then OJ Howard got in on the action. Again, either him or Brate against man coverage is easy pickins on routes like that. pic.twitter.com/vSm3qWWMDf

It only makes sense that since Howard and Brate are both getting reps with the first team, both staying after practice to get extra work in and are now both running the same kinds of routes that they would both start to have similar success, too.

The play above was just two plays after Brate had scored in the previous video. When you have two tight ends who are both complete in their game and know how to run the same routes, which one do you guard?

The answer is: you can’t

When wide receiver DeSean Jackson signed his three-year, 35 million dollar deal back in March, Bucs fans have been dreaming of the play above.

As we were filming this play, Jackson was late to get separation and late to look up for the ball as it was coming in. Because of that, we thought he was either going to be just too far away from it, or maybe not be able to locate it.

Jackson has such a sixth sense for knowing where deep passes are going to be, and what he needs to do to connect on them. When the throw is that good, it’s going to end well, and it even got a flashy celebration at the end.

#Bucs players running gassers after practice. Most likely because of all the penalties today. pic.twitter.com/t6JZK1YH26

The Bucs are two weeks into the preseason, which means they’re two weeks away from playing ball that counts towards their most anticipated season in over a decade.

Because of this, head coach Dirk Koetter wouldn’t stand for all the mental mistakes he saw from his team today – or, at least, that’s what we think, even if he didn’t officially say that after practice.

There were more false starts, encroachments and offsides mess-ups today than there have been at almost any other practice. The “punishment” for that can bee seen above with the entire team running three or four gassers after practice.

Koetter knows it’s go time. He needs his team to play like it every day.

Normally the players do some dancing by themselves during warm ups, but @Geraldini93 found a dance partner from the stands this morning. pic.twitter.com/VdDGjmartN

We’ll have something up specific to Jameis Winston and the players putting on their yearly Special Olympics clinic, which happened today, but for this spotlight, we’re going to chose something else.

Normally when practice begins, the resident DJ (it’s just a guy with his phone plugged into giant speakers) plays something to get the guys hyped up. That usually leads to some of the players dancing. But, today, Gerald McCoy decided he needed a dance partner.

The video above shows the tail end of happened, but McCoy went over to the stands, grab a little girl (with her parents’ permission, of course) and brought her out to help the guys get pumped up.

Gerald McCoy is one our favorite people, not only on the Buccaneers or in Tampa Bay, but in the entire National Football League, and it’s for reasons like the one above. McCoy treats fans like no one else does. He know how much joy his actions or his words can bring, and uses that whenever he can.

The team has the day off tomorrow, but will be back at it on Tuesday.

Offense has the ability to go ball control or all out deep post and go routes. Very encouraging. Defense is still an enigma to me along the D-line. At least the gap discipline is showing up but too many mistakes from pre season have carried over to the practices. Martino was a reliable WR year, so I will chalk up those dropped passes in a pre reason game 1 a gimmie. However, Huff sticks around purely based on raw athletic talent. Imagine a 4 WR set with DJAX and Huff on the outside and Evans/Godwin in the slot. To me… Read more »

You probably grow tired of people commending you on your highlight coverage, but again you stand alone here my friend, they are the best. As I know you will, keep up the good work. Young wunderkind Riley Auman is an up and comer and is very good too. Again thoroughly enjoyable! Go Bucs!

Is it me or have I just not been paying attention. I have not seen/heard much of DE Will Gholston this offseason. No highlights, interviews, or scenes from HardKnocks that I can recall. I have not seen one mention of Gholston in PR since March during early free agency. Did I miss something? Gholston was one of the Bucs top free agents this year and was expected to dominate in the run game with anticipated improvement as a pass rusher. I’ve seen two preseason games and not much of Gholston, nor have I seen any practice highlights of mention. I… Read more »

I love me some GMC.