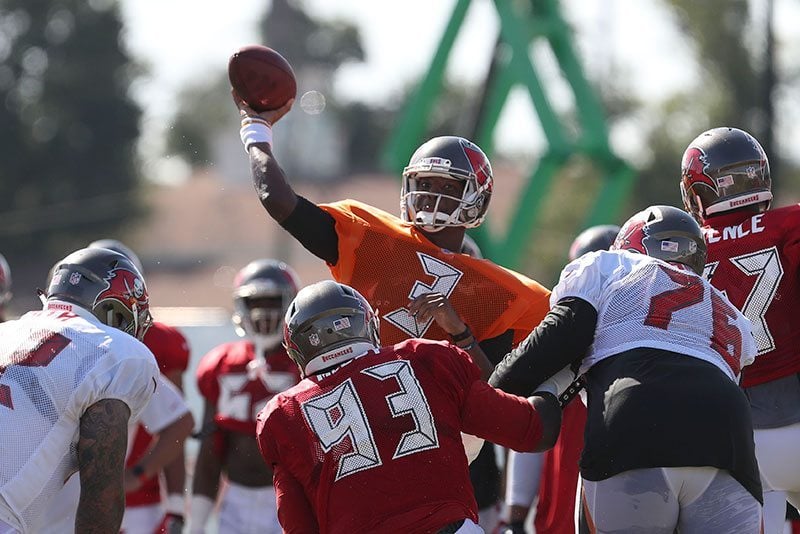 It’s week three of the preseason, and things are kind of starting to feel like they’re just going through the motions.

The kids are back at school, so the crowd wasn’t as big as it usually is. Plus some of the starters were missing due to injury. There was just a “get on with it” mood around One Buc Place as the media and the fans are anticipating the regular season – games that matter.

For some, their chance to make the final roster has ended prematurely. We’ve already seen the likes of Maurice Fleming and Cole Gardner be waived, and this morning the Tampa Bay Buccaneers announced today that the team has signed long snapper Andrew DePaola and waived (injured) cornerback Jude Adjei-Barimah, who will likely miss the entire 2017 season due to a knee injury.

Starting middle linebacker, Kwon Alexander, was out for today’s practice. He appeared to aggravate his hamstring at the end of Sunday’s practice. His injury doesn’t appear to be a serious one, but his absence did give way to defensive coordinator Mike Smith getting more creative than he has to this point, especially on the defensive front.

And yes, that means, for the first time, we saw the Bucs defense play in a 3-4 on Tuesday.

With Alexander out, the Bucs went with Kendell Beckwith in the middle, Lavonte David on the weak side and Ardarius Glanton on the strong side. That’s what they trotted out on the first few plays of 9-on-7 (a run defending drill with no wide receivers or corners).

However, after a handful of plays, they line up as shown in the tweet above, a line up that we had not see yet from this team – in a 3-4 defensive formation. Glanton and Noah Spence were the two edge rushing linebackers during the couple 3-4 plays the defense ran with Gerald McCoy and William Gholston as the defensive ends and Clinton McDonald in the middle.

It was interesting that McDonald was the first to get snaps at nose tackle since the whole reason the speculation even began for a Bucs’ 3-4 front was when they brought Chris Baker in (who played the nose tackle in a 3-4 for Washington). There wasn’t much to report on the matter since the contact in practice is limited and they only ran the formation a handful of times. However, they continued to work on it during the install period, so the possibility of it showing up in games is legit.

Personnel is a big deal for a 3-4, and the Bucs running one could be smooth if everyone is healthy. Spence played some stand up linebacker in college, and if Bond is healthy as the SAM, playing a 3-4 is actually his bread and butter, so he could fit opposite Spence. Alexander and David would be fine in the middle with some rotation of Ayers, Gholston and McCoy as defensive ends with Baker and McDonald as nose tackles.

What the team can’t do is run the 3-4 with Alexander in the middle and Beckwith as the other linebacker. Call him a middle linebacker or call him a SAM, he is not an EDGE 3-4 player. They were able to run it today with Beckwith in the middle, but if they want to keep him in the top three linebackers, a 3-4 wouldn’t gel, if you ask us.

K Nick Folk goes 4-for-4 on the narrow goal post – and got a big bear hug from Donovan Smith after the last one went through.

Other than the defense getting creative, the big story from practice on Tuesday had to be kicker Nick Folk drilling all four of his kicks on the narrow goal posts, which included one from beyond 50 yards.

Folk had an extra point blocked and a field goal missed in the Jaguars game, and the confidence in that performance following the release of Roberto Aguayo was not ideal. However, after today’s practice, the coaches and the players had to feel a little better. Staring left tackle, Donovan Smith, even gave Folk a giant bear hug after the final kick went through the uprights.

Quality Over Quantity For The Offense

DJax in the slot. Big gain on a touch pass. Winston has been dealing over the last few practices. pic.twitter.com/mYu4GT0bDZ

There weren’t a plethora of big plays from the Bucs’ offense on Tuesday, but a lot of that had to do with the kind of drills they ran. They didn’t run much scrimmaging until he end of practice, but once they did, the offense produce.

One example of that was in the clip above where Jameis Winston delivered a beautiful touch pass to DeSean Jackson, who easily beat Robert McClain in the slot. It’s tough to hit a player with Jackson’s speed in stride, but that’s exactly what Winston did. He’s quietly been dealing over the last few practices and that’s proving that his preseason performances and efficiency haven’t been a fluke.

Play of the day right here.

Fitzpatrick sells the play action one way, rolls the other, then bombs it to Howard on the opposite side for 6. pic.twitter.com/06WIU4o15t

But, the play of the day didn’t come from Winston and the first team. That honor goes to Ryan Fitzpatrick and O.J. Howard.

On a play that involved a play action to one side, a roll out to the other and a throw back to the original side, I’m not sure how you could expect the defense to keep up – it’s tough enough covering Howard on regular plays.

Click the next page to read our notes on the finer details of Tuesday’s practice.

When was he signed and he already has an INT? o.O

He was signed during the first week of training camp. He’s been in Tampa for a few weeks. He’s a 3rd string guy.

Thanks! Maybe he shows up in some upcoming games and stick around longer.