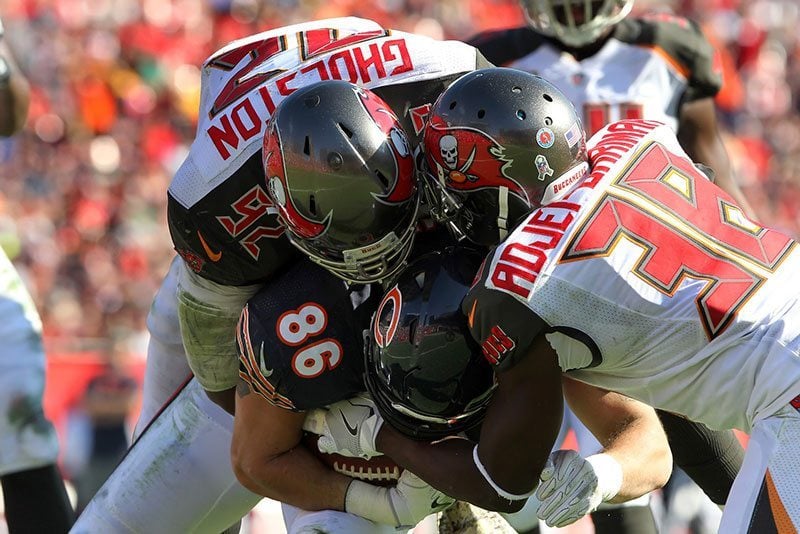 The fluidity of the Bucs roster situation in training camp continued on Tuesday as the team announced that they have signed long snapper Andrew DePaola and waived (injured) cornerback Jude Adjei-Barimah. DePaola (6-2, 230) spent the past three seasons (2014-16) with the Buccaneers, playing in all 48 games, registering eight special teams tackles. DePaola suffered an ACL injury in the season finale against the Panthers. The Buccaneers signed Garrison Sanborn, formerly of Florida State as the team’s long snapper where he has played throughout training camp and the preseason.

Adjei-Barimah played in 23 games, with eight starts, over the past two seasons with Tampa Bay, recording 62 tackles, three passes defensed, 2.0 sacks and one forced fumble. Adjei-Barimah came into training camp to compete for the starting nickel corner spot, in addition to getting reps on the outside, backing up starters veteran Brent Grimes and Vernon Hargreaves.

Adjei-Barimah was suspended for four games in 2016 for violating the NFL’s policy on performance enhancing drugs, but never saw the field after being eligible due to an injury. He came back healthy in the offseason and was expected to be a prominent contributor in the secondary, but suffered a patella injury in a non-contact drill earlier this month in camp.

To supplement the loss of Adjei-Barimah to injury the Bucs added cornerbacks Vernon Harris and Mariel Cooper over the last two weeks for camp depth.

–Part of this report is courtesy of the Buccaneers Communications Department

Not sure if it was Mark or Scott that wanted to fight Jude. Maybe the podcasts got him cut?

The Bucs also added OT Marquis Lucas/West Virginia after OT Austin Albrecht/Utah State lasted only two days. Tell Trevor he has to update his projected final 53 because OT Cole Gardner was cut. Cole maybe shouldn’t have missed the block that caused the QB Ryan Griffin injury. Lol. I expect more roster churn at the UDFA positions as players are released from other teams. Go Bucs!

That will be hard this season, macabee. No one gets cut until after the last preseason game and then all clubs will be at their regular season 53 man roster. I guess there is a little time between the last game and the regular season, but I don’t know how they are going to handle that. It should be a lot harder to get cut and then picked up by another team for all players now. I guess you would have to really prove yourself in a couple of practices since the teams will not be able to throw you… Read more »