The Bucs selected edge rusher Joe Tryon-Shoyinka in the first round last year, and while he saw the field in a depth role as a rookie, he’s expected to make the leap to full-time starter this season. With that new role comes high expectations, expectations new head coach Todd Bowles isn’t shy about expressing publicly.

“Well, they’re high,” Bowles said. “He’s very athletic. Obviously, we took him in the first round. Going into year two, we expect him to have the nuances down with a lot of the things he did last year and expect him to come into his own. I don’t expect him to be [Jason Pierre-Paul], I expect him to be Joe. He has a skill set all on his own that he could be a good player.”

The Bucs have a pretty good pair of bookend offensive tackles that will challenge Tryon-Shoyinka on every play in practice. Bowles was quick to point out that the challenge will only improve the second-year edge rusher.

“Going up against Tristan [Wirfs] and Donovan [Smith] everyday can’t do anything but make him better,” said Bowles. 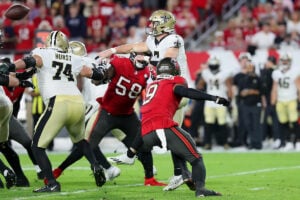 Based on what we’ve seen at OTAs, it appears Tryon-Shoyinka could be lining up on the left side. At least that was the case during Wednesday’s practice. Fellow edge rusher Shaq Barrett racked up most of his 19.5 sacks in 2019 playing right outside linebacker, so allowing Barrett to move back to that position should benefit the defense. Pierre-Paul expressed his preference to playing on the right side when he returned after missing eight games with a neck injury in 2019. Barrett primarily moved to the left side as a result, although he has see some action on both sides.

Like Bowles, Barrett also has high expectations for Tryon-Shoyinka and is excited for his opportunity to start. The NFL’s 2019 sack leader thinks his 23-year-old teammate has the ability to be a consistent double-digit sack performer.

“I think Joe could be a double-digit sack guy every year,” Barrett said. “I’m excited for him. In practice, I’m seeing him put the work in, so it’s just a matter of time for him to just get out there and get comfortable with it on a play-in, play-out basis, and then he’s going to take off. It could be the first game or the second game, but I have faith in him that he’s going to be making plays – not just sacks, but forced fumbles, tackles for loss, passing game – he’s going to really affect the game. It’s going to be fun to play with him.”

The former Washington Husky was productive in his rookie season, but he left a lot on the table. Finishing with four sacks, he could’ve had more if he played a bit more disciplined.

But as a first-year player, he was still grasping the defense and learning the intricacies of the NFL game. Heading into his second season, Tryon-Shoyinka should be more prepared for the challenges of the game. If he can take it to the next level, the Bucs will be in great shape getting after the quarterback.

JTS has great get off speed and plays with plenty of power. If he can play a little more under control and watch more film he has lots of potential to be a very good pass rusher. Hoping he does.

I missed the plenty of power bit about him. He got diverted or handled by right tackle handily on most plays I focused on last year.

I agree, and witnessed that myself. He definitely needs to add a little muscle and build up a little strength. If he does, look out, he might just become a terror on the field.

Yes, this would be nice.

This would be ideal but he’s still got plenty to prove before we jump ahead with type of talk. We’ve seen athletic pass rushers with all the potential in the world not be able to be consistent pass rushers and run stoppers.

Mr Coulda/Woulda/Shoulda. Show us Tryon. You gonna have to make one hell of a leap from your play last season. You and Nelson. I’m not feeling it. And I do hope I am wrong. Good Luck.

Well, it says a lot about this kid that they haven’t resigned JPP. They must have a lot of faith in him and I’d tend to agree. His rookie year he looked pretty good, we shouldn’t be expecting JPP or Shaq type performance just yet.

Here in Bucville, fans always expect a rookie to come right to the NFL and set the world on fire. No learning curve, straight to the top, or the grumblings of “bust” are sure to start. In the case of JTS, there has got to be at least a little more time to acclimate after not playing his last season in college. Some may recall the great Warren Sapp unable to beat out Santana Dotson and got a whopping 3 sacks his rookie season. A bit of patience. The tools, work habits, and desire are there………the results will come.