Long-time Bucs linebacker Lavonte David joined the local media for a virtual press conference on Tuesday, shortly after Tampa Bay officially released the organization’s new uniforms. David spoke about his first impressions of the new uniforms, which he donned in the Bucs’ announcement video, as well as the reaction of fans and teammates to the team’s new look, in addition to the acquisition of legendary quarterback Tom Brady, and what the defense will look like in a second year under defensive coordinator Todd Bowles. “When I first saw them, basically it kind of reminded of back in the old times when I first got here, my rookie and second year,” David said. “They were similar and then they came out with the different ones, the color rush uniforms, and I was blown away by those. I thought those were fantastic. I’m pretty sure everyone likes them, I see we’re getting a lot of responses to them. I feel like everybody is pleased with them.”

David said it was tough to keep his lips sealed after seeing the new uniforms. He claimed to repeatedly tell friends and family to just wait until April 7 when asked about the new look, but now believes that everyone really likes the Bucs’ new look.

“[Teammates] have just been commenting with the fire emojis and the mean face emojis,” David said. “Everybody thinks they look really good. Guys are posting them and things like that”

When asked about what it will mean to see his new quarterback in one of Tampa Bay’s new uniforms, David said he believes that’s when the reality of Brady joining the Bucs will hit.

David marveled at Brady’s accomplishments, his leadership and his football I.Q.

“He’s going to have a lot of knowledge – a lot of knowledge for me, helping be a better leader, be a better teammate, find all the little things to put us over the hump, put us over the edge,” David said. “What he brings is that winning mentality, that attitude. He knows what it takes to get there and he knows what it takes to win it all, and that’s what all the guys in the locker room want and he’s the perfect guy for it.”

But while a lot of offseason talk has been about the Bucs offense that features Mike Evans, Chris Godwin and now Brady, David spoke about what Tampa Bay’s defense will look like in a second year with Bowles. 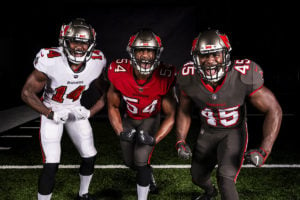 Last offseason the Bucs were able to secure a new head coach in Bruce Arians, a new coaching staff and began learning new system on both sides of the ball. This offseason Tampa Bay secured a new quarterback and new uniforms. David believes this is the perfect opportunity for the Bucs to return to their winning ways, the way the team played when they first unveiled their strikingly similar uniforms in 1997 – a season that ended with a 10-6 record and a wild card playoff berth.

“It was kind of a different feeling when we put those uniforms on,” David said. “It reminds you of the times when everything in Tampa was going on the up and up and now we’re trying to get back to that way. New uniforms, new team, new look and we all have to just put it on the field now.”

Pewter had a nice 5 year run, but it is now a losing color.

all this hype they built the new uniforms up to be .. only to be deflated worse than that ball allegedly Brady beat the colts with lol…. another analogy back in the day Mike Tyson fights … this will be the fight of the decade!! Mike Tyson knocks him out in 10 secs… I had so much more expectation than these blah blah blah uniforms… lol . and ??? how can they be New if there technically very similar if not almost identical to the ones we were when we won the Super Bowl ??????????

Who ever decided on these should be fired!! new year , new direction, new changes uniform should have followed suit … I’m just saying I don’t know though I am only a fan lol.. im sure more fans feel like i do bring the creme sickle jerseys back or hi light the orange more

You complain they should do something different yet you want the cream sickle back? You know how that sounds right? Teams don’t change uniforms constantly. We did to get away from being the Yucks. We never should have changed them in 2014. So all this does is brings back the uniforms the way they should have stayed with a couple updates like the bigger logo and the better color rush. Asking for something different got us the worst uniforms yet with the last ones. They don’t need to be different, just a nice clean look with our team colors which… Read more »

Let’s just say that the “new” uniforms r an improvement over last years uniforms. We’ll keep it positive. Like the alternate uniforms the best. Lastly, they should switch the uniform pants around. Put the white pants with red jersey and the pewter pants with the white jersey! That makes them unique and know one will confuse our uniforms with the dirty birds uniforms. It’s done, it’s an improvement, and we r an improved football team. Let’s just kick azz on the field and become the first home team to play a Super Bowl in our own stadium! Stay safe and… Read more »

I Didnt expect them to change colors completely!! Now have I seen better ideas and color schemes using all team colors In our past ? Most definitely!! I didn’t say I don’t like the pewter just saying I would have like to seen more of the orange incorporated.. all I’m saying is they put all this hype and facial expressions of players while they were dropping teaser videos of what there going to be. I think they over sold the change dramatically.. i mean how many people on here thought they were going to look like this . And yes… Read more »

There’s always a few people who think they raise their IQ by being more critical as if somehow they are free thinkers. My guess is those folks don’t buy any Bucs stuff or attend the games anyway.

Pewter & Orange sherbert make us unique. Too many teams wear red. The red jersey could have been orange with pewter numbers. Bold & different like we used to be. Anyway none of us will care if they take us with back to the promise land.

An then there’s people who think they have higher IQ’s and try to bash on people then they sound like a jack – – – . lol you picked the right avatar there guy lol…. i probably have more buc gear in my closet than you have in your whole house… when did you become a buc fan after they won there SB? I mean I don’t know why people are so quick to judge or talk down people 4 just stating what they expected or thought… as long as we have a winning season they could be wearing purple… Read more »

Dude…You’re totally entitled to your opinion!

Don’t worry about @scubog insulting you by being dismissive of your fandom vs his. I’m sure he’s a nice elderly gentleman, but he’s always complaining about other fans.

“Get off my lawn you dag nabbin whippersnappers! I was part of the Bucs focus group!!”

Yes Kayden, the avatar is intended to be a smart-ass. I happen to have a good sense of humor. I never mentioned your name and am not trying to insult anyone for their opinions. Only when they present them as facts do I shake my head or is it SMH? Just my observation from being a fan of this team for so long with guys like BucFan 47 who must have had a podium in his Tennessee den. Being a charter season ticket holder, which means I’ve had them since 1976, I’ve paid my dues with hard earned dollars and… Read more »

Lol … im not big Sombrero. Lol I grew up in a military family so everything just rolls off me haha.. especially with all this madness going on yes I was critical of the the old/new jerseys. But as a fan an you expect more I wouldn’t call your self a fan if you wouldn’t want more for the team you route for….. for years an years before bucs got good people always asked ughhh yuccaneers… they suck… and I was like I don’t care thats my team even have the old logo tattooed on my bycep.. lol go bucs….… Read more »

They definitely overhyped them. By switching back to the old superbowl jerseys, they’re basically admitting they made a mistake with the digital clock jerseys.

Teasing the “new” jerseys coming out for months was just a marketing gimmick to build interest.

I would have liked new jerseys that were actually new, but I dont mind the old superbowl jerseys making a comeback. It was a safe play. The all pewter one is solid and they can only wear it a few times per year, like MNF or TNF.

I don’t care about uniforms at all. I care about WINNING. They can dress like Capt Kirk and Spock for all I care. WINNING is all that matters. Whew..You guys looked good..Did you Win? Nope but we sure did sparkle in those spiffy uniforms! What a croc.

My apologies scubog.. lol .. I just wanna win like Al Davis said best …. just win baby win!!! Lol thanks for that message . It drove me crazy after we won the SB…. so many bandwagon fans .. when you asked them about history players current and old.. just in conversation they had that blank stare on there face like ughh ok sure lol.

I know exactly what you mean Kayden. After suffering through so many Monday mornings hearing, “What happened to your Bucs?” Then in the late 90’s, it became “Gooooood morning, we won!” It’s the fans who have lived here most of their lives, but hesitate or refuse to adopt the local team even to the point of forcing their kids to cheer for a team from a place they’ve never even been to visit. Then they look down their nose at Bucs fans as if we were too stupid to pick a better team. They’d say, “Why do you root for… Read more »