Bucs’ Martin Believes His Demons Are Behind Him

Home » Articles » Bucs’ Martin Believes His Demons Are Behind Him

Bucs’ Martin Believes His Demons Are Behind Him

Home » Articles » Bucs’ Martin Believes His Demons Are Behind Him

Tampa Bay Bucs running back Doug Martin spoke to the media after practice Thursday for the first time since last season’s tumultuous ending.

“It was a journey. It was,” Martin said, referencing his bout with addiction that resulted in a three-game suspension. “With the statement [last year] … I knew I had to go get help. It was a journey of self-development. I learned a lot about myself. I was lucky to have the support of my family and friends, the fans and teammates all around me and I’m glad to be back here.” 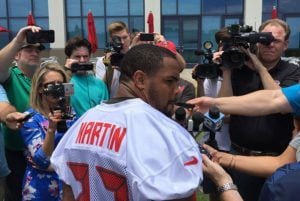 Martin played only eight games last year after surpassing 1,400 yards for the second time in his career in 2015. That season earned the 28-year-old a five-year, $35.75 million deal, but more injuries and the substance abuse issue have made Bucs fans question his future with the organization.

After allowing Martin to enter a rehab facility and address his addiction, the franchise responded by standing with him, but also using a fifth-round draft pick to select Boise State running back Jeremy McNichols.

When asked about his level of trust in Martin bouncing back from last season and the suspension, Bucs coach Dirk Koetter said he expects a motivated No. 22 throughout offseason workouts and beyond.

“I think just from my own experience, when Doug’s practicing like this – when he’s finishing plays, when’s he’s got that burst, he’s got that pep in his step – it’s carried over to the field,” Koetter said. “We have a ways to go. We have to get through preseason, we have to get through preseason games healthy, Doug’s got to stay healthy – there are more things that have to happen. Time is on our side. I know everyone wants to know, they’re anxious to know, but there’s just nothing to know right now. We just have to wait this out.”

Injuries plagued Bucs running backs throughout the 2016 season and Martin still finished as the team’s second leading rusher with 421 yards and three touchdowns on 144 carries. Including quarterback Jameis Winston, Tampa Bay’s top five rushers in terms of yardage are still with the team: Martin, Jacquizz Rodgers, Peyton Barber and Charles Sims. They are joined on the offseason roster by McNichols and fellow rookie Quayvon Hicks, Russell Hansbrough and Blake Sims.

“We’ve been happy with the trajectory he’s on,’’ Licht said. “I’ve said that before but it’s the truth. He has the right mindset right now and he looks good physically. We still have some time there but just two years ago he was the second leading rusher in the NFL. Within the building here, we feel comfortable with our guys, and that includes Doug.’’

Martin said he’s put his substance abuse issues behind him and is focused on moving forward and getting ready for the upcoming season.

“It’s behind me; it’s definitely behind me,” Martin said. “I’m just coming out here practicing my best and doing my best to help this team.

“It was hard to be away from my friends and family but I found strength in the people I was with. [Rehab] was definitely worth it. I definitely turned a negative into a positive and I’m definitely a better person because of it.”

Martin was also asked about his troublesome hamstrings, which caused him to miss stretches of games throughout his five-year career.

“The hamstring feels good,” he said. “I did have that injury last year and then I aggravated it about two or three weeks into my recovery. I was out another two or three weeks after that but it feels good right now. I’m not worried about it. I’m keeping track of it and making sure I stretch it out and making sure that I’m hydrated and it feels good. I began to feel better a long time ago when I was training in the offseason.”

Hoping for another 1500 yard season he’s certainly capable of he can stay healthy. Go Bucs!

I’m happy to be a fan of a team that doesn’t rush to cut a player with a good reputation.
I will feel even better if like Fredster said Martin can pull out 1500 yards in 13 games

Hopefully he understands that “recovery” is never behind you and its a life long process. Hope he stays healthy both mentally and physically.

He keeps saying WAS, it WAS a journey. That everything is behind him. Believe me, I know. It’s in front of him every day. There IS no thirty day rehab cure. There is no cure, period. Once an addict, always an addict though there is a way to deal with it and to stay clean and sober one day at a time. So I’m typing this is still a gamble on the Buccaneers part. Only Doug himself is responsible for his staying clean and running around in shorts is not what I’m typing about. So far? His words are self… Read more »

If he truly believes the whole thing is behind him, then he never went to an actual rehab or he learned NOTHING while there.

Martin seems to be doing and saying the right things. While many were quick to call for him being cut, I was never on board with that thought process. With the amount of injuries he’s had, it’s understandable to become addicted to a pain killer. I’m hoping he can avoid a relapse and look forward to the return of the Dougernaught!

I am a big Doug Martin fan and supporter and I respect the Bucs for supporting his efforts to get his life back in order. My concerns have always been his health and he has always had injury problems and a “sensitive” hamstring for a running back is a major problem. I don’t think the Bucs can rely on Doug as a feature back but he can still be effective and reliable if they use him properly. Without a running game, the Bucs will not be a playoff team and I hope this is a primary focus for Coach Koetter.… Read more »

Wait, he was addicted to Adderall? I didn’t know that was a thing. Now, going out and partying every night, then using Adderall to recover before practice, and getting popped on a drug test – that’s a thing

I can totally see someone getting addicted to it.. Its a speeder for people. Easy to abuse.

Dougy is going to have a great year, and he will be the feature back from game 4 on.

As far as I know the identity of the “PED” drug(s) Doug Martin was consuming/abusing has never been revealed. There has been an on-going assumption it was Adderall, which, as Bschucher noted, is a form of “speed” that is often abused by mommies who have declared their child has symptoms of ADHD just to get their hands on it.

For me, it no longer matters what Martin was taking. What matters is how he conducts himself now. I’m rooting for him so I can put my #22 jersey back in the front row of my Bucs gear closet.

What’s going to be tough is how the Bucs will approach preseason. Normally your highest paid feature back gets all the first string practice reps, but few touches during live action, and never plays the final preseason game. The Bucs don’t have the luxury of protecting him this preseason trying to keep him fresh, and injury free for week one. I would give a lot of first string work to McNicols, and Barber, Quizz knows what to do, as does Martin. However I’m sorry Doug, you’re the back that has to carry the load in game four this preseason. He’s… Read more »