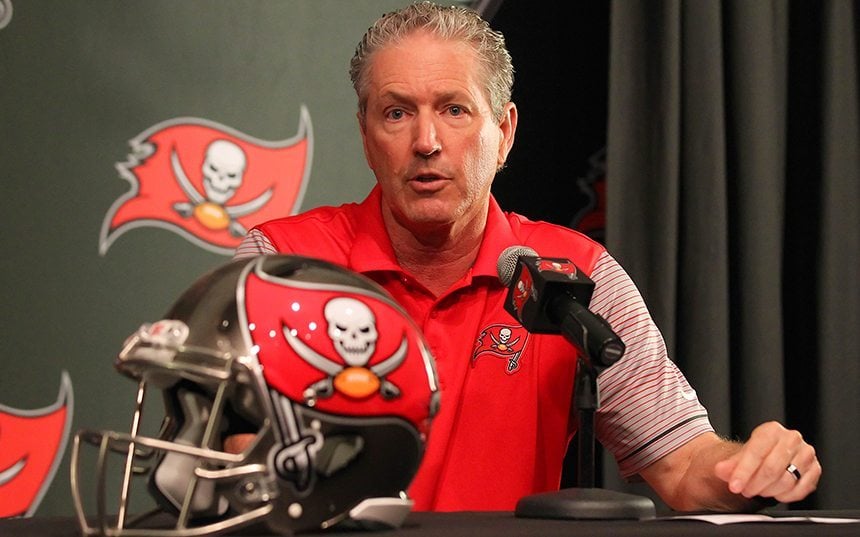 Media jumped all over the sound bite and Bucs fans fed off the first-year coach’s energetic style.

It was a two-part quote, however, that Koetter tweaked and borrowed from U.S. President Theodore Roosevelt. And according to the coach, some behind-the-scenes individuals violated the first phrase: “Speak softly.”

The minders of the Bucs’ social media accounts displeased the head coach so much so that Koetter felt the need to lead off his Thursday media session with an apology.

“I want to make sure that on behalf of the Bucs organization that I apologize to the Falcons for whatever that was supposed to be that went out on social media yesterday,” Koetter said about a photo and message tweeted out and directed at the Atlanta Falcons on Monday afternoon. “That’s not what our organization is about. That was totally unprofessional and not smart on our part, whoever’s responsible for the that.”

The tweet in question was posted in response to a tweet the Falcons posted on the Bucs’ Twitter page. The Bucs first sent out a benign marketing tweet publicizing the sale of team-branded ‘fidget spinners,’ to which the Falcons replied with a GIF of cornerback Desmond Trufant and message asking, “Are you nervous about something?”

Not to be outdone on their own Twitter account, the Bucs shot back 1 hour and 3 minutes later with the knockout blow: A slyly selected locker room photo of Vernon Hargreaves III fist bumping Jameis Winston and the comment, “We ain’t worried ’bout nothing!”

What makes the photo selection amazing is that Hargreaves (No. 28) is off to the left and Winston (No. 3) is just off to the right.

As in the Falcons leading the New England Patriots 28-3 in the third quarter of last February’s Super Bowl before melting down and losing 34-28 in overtime.

Koetter did not appreciate the cleverness of the photo selection and snarky nature of its meaning, though, and said he disapproved of the jab at his former employer.

“Heck, we want to be playing in the Super Bowl and we were home sitting on our butts while they’re playing,” Koetter said. “So we’ve got no room to be making fun of anybody that was in the Super Bowl, whether they won or not.”

Oh come on Dirk! At the very least, you have to admit it was a good little jab. Well played Bucs Twitter handlers…well played indeed

Teams take shots at each other on Twitter now. You’ll see it in any sport. This isn’t the first time the Bucs have zinged a rival. Advertising for a fidget spinner (That was the speak softly part). The responsed to Atlanta’s jab (That was us using the big ‘effin stick). What’s the point of carry a stick if your’e not going to us it.

A friendly little jab?
That was no jab, that was a 1st round KO.
The Falcons staff had it coming though.
But I definitely see Koetter’s point.
No need to give the Falcons any extra bulletin board material.
So until whoever handles the Bucs media account wants to strap on a helmet and slip on some pads and do some hitting on game day, its best they get their little swipes in at little girls who is what Twitter is designed for,

Being a certified smart ass myself, that subtle underlying counter punch was hysterical. Falcons started it……..Bucs finished it. I see Dirk’s point noting how at least the Falcons got to the dance while the Bucs were left to watch on TV. Maybe it’s a bit in poor taste for the organization to officially respond, but certainly not for our players and fans to have a little fun at the Falcon’s expense. That’s what rivalries are about.

One of my favorites. Why do the Falcons play on artificial turf instead of grass? So the cheerleaders don’t graze at halftime.

Social media is annoying. I have no twitter or snap chat. Yes I’m old. Lol. I think Koetter was right to say something. Don’t need stupid distractions. We were 9-7 they were in the Super Bowl so shut up and let your play this year talk!

I’ll take a 9-7 record to losing in the Super Bowl any day myself. All second place is is the first loser. You show me someone who likes coming in second and I’ll show you a loser. They may as well have been 1-15 and taken the higher pick as far as I’m concerned. You think the Failcons enjoyed coming in second? It may as well have been last. Atlanta screwed the pooch and watching the meltdown was awesome. Couldn’t have been happier even given my disdain for TB and the Pats. But to pretend that this type of stuff… Read more »

As someone who has been known to trash talk, I bet NO Buc player wants to apologize for that photo. And if they do, cut them because they do not have the confidence to beat the Falcons. I would beat the farm that Jameis loved it because Jameis has no fear.

The Bucs have way more problems then worrying about some twitter BS! Lets get the team ready to compete, otherwise I’m sure Mike Smith is ready to take over when Dirk gets canned!

Absolutely loved it! Teams go back & forth frequently, why should the Bucs account stay silent to something directed at them? Ironically, I didn’t register the 28-3 connection as 25 is my 1st thought on their loss lol! Go Bucs!

As much as I love Dirk as our HC, and respect him and his opinion, he shouldn’t let this bother him so much. I get it and he’s right, we have no right to be poking fun at anyone playing in the super bowl, but with the younger generation that I’m unfortunately a part of, social media is huge. Personally I thought it was hilarious when I saw it posted. Thought it was even funnier when someone replied how did you not make a 28-3 joke and the Bucs replied to them with nothing but a set of eyes. They… Read more »

Just a little side note, had it not been Atlanta, given his connections with the team, would this have rubbed Dirk the wrong way that it did? Like if it had been Carolina last offseason for instance?

Coach wants them to do the talking on the field !!