Bucs Monday Mailbag 11-20: Almost Collapse In Miami And Winston Back This Week? 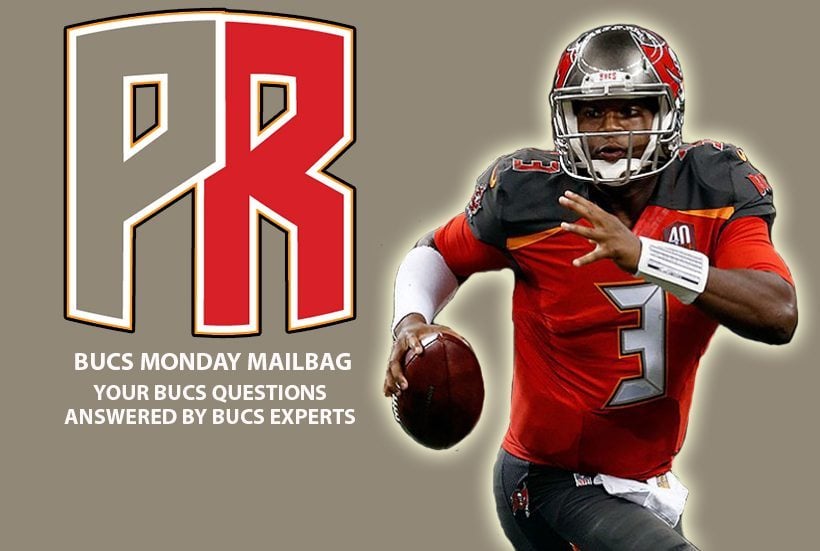 Bucs Monday Mailbag 11-20: Almost Collapse In Miami And Winston Back This Week?

It is Monday, which means time for another Monday Mailbag where we answer your Bucs-related question each and every week. You can submit your questions via Twitter using the hashtag #PRMailbag.

Question: Does Jameis Winston return this week despite whats looming or do we rest him again?

Answer: That is a question we all want to know and hope to get a better idea later on Monday after meeting with Dirk Koetter at 2:45 p.m. The initial timeframe was two weeks which is over now, but as you mentioned, with the Winston controversy that arose last Friday, the team could be reassessing his comeback, if in fact he is even medically cleared to practice this week.

Personally it wouldn’t surprise me to see him stay in the same status for at least another week. Playing on the artificial turf in Atlanta wouldn’t be good for a sore shoulder if he took another hit on it as he did in New Orleans. Plus, it gives Ryan Fitzpatrick another start after two straight wins. But as mentioned, we should get a better idea later on Monday.

UPDATE: In Koetter’s Monday afternoon press conference, he stated the medical staff has not cleared Winston to practice, and he would not be available for next Sunday at Atlanta. Winston will be evaluated again next Monday.

Question: Does Fitzpatrick have the hot hand? Do you let him finish out the year? Or do you bring Jameis back as soon as he’s healthy?

Answer: Well with two wins in a row Fitzpatrick certainly does at least have some momentum on his side right now. Of course playing the Jets at home and the Dolphins on the road are a lot different than traveling to Atlanta to face the Falcons who are trying to not lose any more ground to Carolina and New Orleans. If Winston is healthy, I still say he is the better option. He is capable of making more dynamic plays. That isn’t to knock Fitzpatrick who has really surprised me after watching him every day in training. To say I wasn’t impressed in August would be an understatement.

The offense hasn’t exactly lit up the score board with Fitzpatrick at the helm, however, you can’t argue with the results, and the savvy veteran does seem to have a calming presence on the field that seems to have settled the offense down a little. But I am going with Winston the minute he is medically cleared.

Question: We have added some great players the since the Licht era. Seeing the DE and OL play reminds me how bare the cupboard was. Do you think one more year the team will be close to complete at all positions?

Answer: I think that was the plan. I will say this, while the players, media and fans all picked the Bucs to be the darling of the NFL, you never once heard general manager Jason Licht or the owners claim this was a Super Bowl team. Or even a playoff team. I think everyone hoped it was, but inside the walls of One Buc I suspect the organization knew there were some deficiencies. Now, they hoped they could get by with what they had, and hoped the ball would bounce their way a little more than it did. And lets face it, a couple more made kicks against the Patriots, one less blown coverage against the Bills, and this team could easily be right in the thick of things. I do think that despite knowing there were some areas of concern, the fact the defense has played so poorly on the road wasn’t anything anyone really could have seen coming. Nor did anyone suspect Winston would be as inconsistent as he has been at times this season.

Question: Almost a total collapse in the second half. No offense, loose defense. In game adjustments seemed non existent, right?

Answer: Sometimes in football, the snowball starts running down the hill, picking up steam, and it is almost impossible to stop it. That was the case on Sunday in my opinion. That and the Dolphins out-willed the Bucs for much of the second half. Miami just wanted it more at times. But that happens all the times in the league, and really in all sports. A missed block here, a blown coverage there, and next thing you know, your two-score lead is a tied game before you know it. Good teams survive. On Sunday the Bucs managed to survive. That was encouraging.

Every game is a learning process and experience for the future. The second half of Sunday’s game was just that. Now the players and coaches have to keep it from happening again, or none of it mattered. Hopefully lessons were learned. I don’t even want to think how the season plays out if the collapse had turned into a loss. It might have gotten really ugly for the remainder of the season.

“One more year for Keotter?” In the title, but not the questions .
And were all better for it. 2 mediocre wins against shitty teams do not save his job.

Well, it is still theoretically possible that the Bucs could win out over our final 6 games and finish with a 10-win season and a trip to the playoffs. Unfortunately, even if the Bucs were a good team this season, those particular 6 games would be a tall order to make a run. Every remaining team has a .500 record or better, and 5 of the 6 teams are strong contenders for either the NFC South division crown or a wild card. Even the weakest team remaining – Green Bay – may yet get Aaron Rodgers back for our appointment… Read more »

At this point I don’t care what they do at QB because I have no faith they can win out. Maybe they prove me wrong. Down the road even if the Winston gets the Uber thing behind him, we still have a QB problem because when he’s not throwing picks he’s fumbling the ball. Winston in no small part is why this team was playing catch up nearly every game. As for Koetter and Smith, they should be gone the worst thing that can happen right now is either of them getting enough results to stick around. From my outside… Read more »

If the Bucs beat Atlanta I may start to believe in them AGAIN.

Winston is our QB! There’s no reason why he wouldn’t have won those two games too. The Defense has been much better these last two games and hoprfully will continue to improve, if Mike Stubborn Smith keeps sending one of the LB’s to help with the pass rush. I can’t believe some of you all. He is the best QB we have ever had! Yes there is room for improvement. As to our Offense, Kirk Koetter does okay as an OC; if only the HC would tell him it’s okay to continue with what is working despite being ahead. It’s… Read more »

As Parcells was fond of saying, you are what your record says you are. To say Mark if we made some kicks, against N.E., and a few more plays against Buffalo is just wishful thinking not based in what really happened. I can say if Moore started instead of Cutler Miami would’ve won. Does anyone really believe Tom Brady was going to walk off Ray Jay without the win? The season will play out, we will be what are record says we are, and if that’s good enough for the Glazers to keep Licht, Koetter for another year, so be… Read more »

I am torn between wanting to do no further damage to players like Winston, Alexander, and Grimes this year and wanting to give the last 6 games everything we have. Realistically, I think we probably split the last 6 games at best. But if we keep Winston out, players like Evans and Brate will probably suffer in stats. Which seems unfair. I want Koetter to stay if for nothing else consistency. In my heart, I think we are a half dozen players away from being a very good team. A new Coach will set us back and stunt the growth… Read more »

Nine Penalties at this point in the season is not good regardless of who the quarterback is. Too many mental mistakes. It shows a lack of discipline. (Yes, I know that Miami had 17. That is irrelevant to my point. They were just plain pathetic!) I read (or heard) somewhere that Fitzpatrick feels rejuvenated and is enthusiastic about playing again. I agree that Winston is a major talent but remains professionally immature. Time and experience is what he needs. Our special teams play has been very good at times … somewhat more consistent than our offense and defense. And we… Read more »