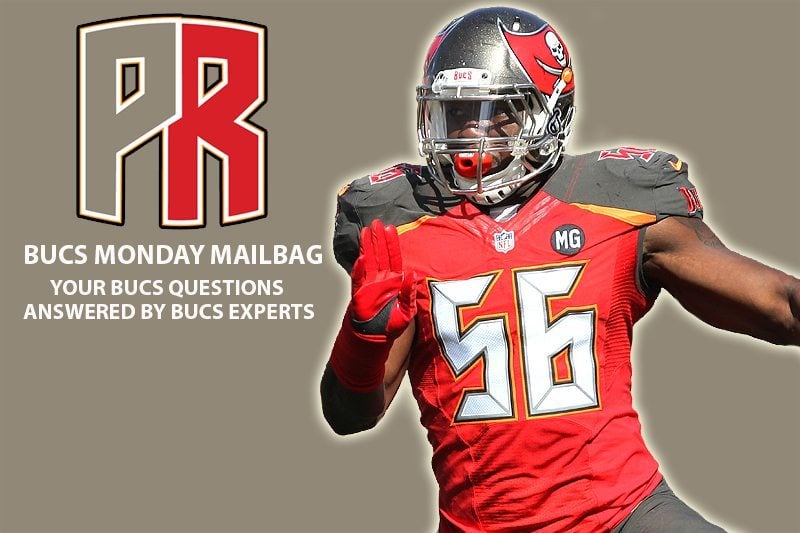 Each Monday PewterReport.com’s Mark Cook answers reader submitted Bucs-related questions and comments about the team. You can also have your question answered by submitting on Twitter using #PRMailbag.

Question: Which position/group do you see being most improved this season?

Answer: I think you could point to a number of units that are better. Certainly the addition of first round draft pick O.J. Howard makes the tight end room better. Adding Justin Evans and J.J. Wilcox should help the safeties, and adding Chris Baker makes the defensive line bigger and stronger and should be better against the run. And believe it or not, having DeSean Jackson and Howard on this side of the ball will make the offensive line better as well. Having a receiver and tight end that can get down the field quickly will allow quarterback Jameis Winston to get the ball out of his hands faster.

But of all the units I think the biggest improvement will come at the wide receiver position. Adding the speed of Jackson will help the overall offense and allow Dirk Koetter to do many more things from a schematic standpoint. Adding speed and a vertical threat will force defenses to respect the deep ball. It will free oup Mike Evans for more one-on-one opportunities, and even open things up in the middle underneath for the tight ends, at times. No disrespect to Freddie Martino, Dontaee Dye, Josh Huff or Cecil Shorts, but Jackson is a legitimate, proven playmaker that will cause some sleepless nights for opposing defensive coordinators.

If this offense stays relatively healthy, I think it has the chance to shatter many team records on that side of the ball.

Question: With mini camp and OTAs over, any areas of concern we could see front office bringing in a FA before training camp?

Answer: I think unless there is a major injury at a thin position (offensive tackle, for example) the Bucs are fairly set with their roster, at this point. You could possibly see the team bring in more linebacker help, especially if Kendell Beckwith’s recovery from injury hits a setback. Now, if by chance there is some super surprise cut at running back or offensive tackle, perhaps the Bucs look to bring them in, but even then, there are a number of teams with priority ahead of the Bucs on the waiver wire. So, chances are slim there are any players that will be cut that make it to them that could be of benefit to Tampa Bay.

One thing we do know is that Jason Licht and his staff are always looking and preparing for possible cuts, and evaluating if there is anyway they can upgrade the team. No question they are always on the lookout.

Question: Big spending year coming up, who do you think doesn’t get paid and ends up elsewhere in free agency?

Answer: Mike Evans is locked in on his rookie deal but I think he is a player that might get his deal done on the eve of training camp. To me it makes sense to go ahead and get it done a year early to save money in the long run. That, and to also send a message to his teammates that hard work and production will be rewarded like it was for Demar Dotson, Gerald McCoy and Lavonte David recently.

Kevin Pamphile is another that is line for a nice pay bump, either here or somewhere else. The offensive line free agent market was super inflated this offseason, so you can bet Pamphile’s agent is licking his chops. Again, the Bucs would be wise to lock him up long before he gets close to hitting the market next spring. But, even if they do, it won’t be long before Donovan Smith and Ali Marpet will be next on the list. Can the Bucs keep everyone on the line? Good news is the Bucs have been very mindful of the future salary-cap wise, and still have another season before Jameis Winston comes due. The price you pay for a (hopefully) successful team is players getting second contracts.

Other free agents after this season the team will need to make some decisions are Brent Grimes, Clinton McDonald, Jacquies Smith and Charles Sims. This season will go a long way in determining who stays and who goes. Plus the development of some of the younger players on the roster. Does Jeremy McNichols show enough to make Sims expendable? Does Ryan Smith do the same and takes over for Brent Grimes in 2018? Those are as much of the storylines to watch this season as anything.

Question: How’s the run game going to be with Doug Martin out the first three games and will Dirk Koetter balance it out or throw more?

Answer: Barring injury, the running back job is Jacquizz Rodgers’ to hold onto until Martin returns. And even then, depending on Rodgers’ production, he could keep the job as the primary ballcarrier. If the Bucs are 3-0 upon Martin’s return, and Rodgers is averaging over four yards a carry, why disrupt things? However, as we saw last season, it normally takes more than one back to get through a season. And, of course, all of this is based on if Martin is still with the team. Not that we foresee anything happening. All through the OTAs and mini camps, it was Martin working with the first team. I am speculating, but really the only reason I could see the Bucs moving on from Martin would be if he were to have some sort of setback in his recovery.

I don’t think Koetter’s game plan would be altered at all regardless of who the running back is. This team knows running the football is the best way for Winston to be effective.

Question: How many tight ends and running backs do you see the Bucs carrying on the 53 roster?

Answer: Just guessing, I would say four at each spot. Tight end wise the Bucs are set with Cam Brate and Howard, and you would think Luke Stocker is a good bet to make the team as he has the most experience plus is the primary blocking H-back. I am not sure the Bucs keep a traditional fullback, as Koetter stated last week. If they do, that player will need to be able to contribute in multiple ways, including a special teams player. After that that leaves one spot for players like Alan Cross, Antony Auclair and Tevin Westbrook to battle for.

Running back you have Martin, although he won’t count against the roster for the first three games, Rodgers, Sims and Peyton Barber. So after the third came the player who makes the roster of the preseason could be cut.

Jason Licht and Mike Greenberg need to continue to keep a watchful eye on the salary cap. Jameis is going to get paid well. But, hopefully the Bucs can keep a team around him. Go Bucs!

I may be wrong, but I wouldn’t be at all surprised to see Winston cut a very friendly team deal ala Tom Brady in order to keep the team competitive for many more years. Winston wants to win above all else and if giving up some millions now so the team can afford other teammates that can make that happen, I can see him do that.

Honest opinion from the way I read the guy right now.

nitney, good point. But, i don’t think Licht and Greenberg can assume that.

Question: (Who) doesn’t get paid and ends up elsewhere in free agency?