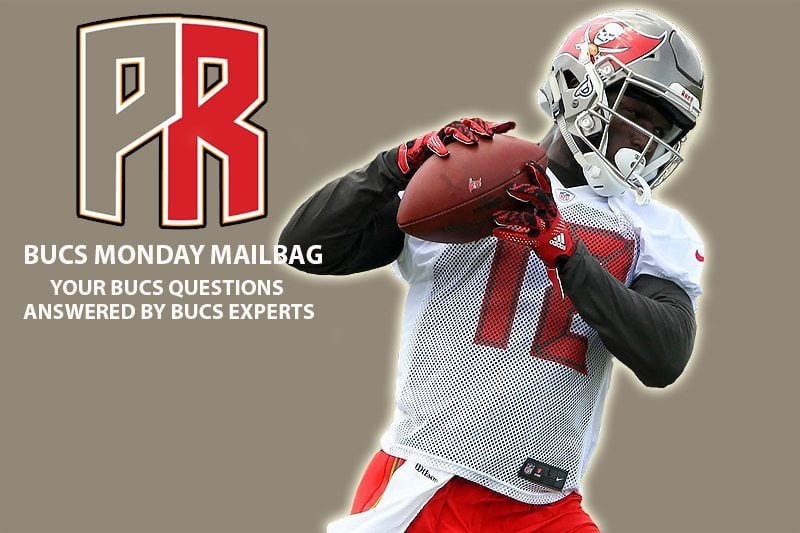 Each Monday PewterReport.com’s Mark Cook answers reader submitted Bucs-related questions and comments about the team. You can also have your question answered by submitting on Twitter using #PRMailbag.

Question: I know it’s only been three days of training camp, but is the hype real for rookie wide receiver Chris Godwin?

Answer: Well it is hard to say how he will perform when the lights come on, but from what we have seen, yes it is real. He started to take off in the offseason programs and has just continued to get better. He doesn’t look like a rookie receiver. Which is a dramatic turnaround from his rookie mini-camp where he really struggled. But something happened between that weekend and the OTAs a couple weeks later. His confidence has blossomed and he is putting in the extra work from what we understand. He is hyper focused, including turning us down for the Training Camp Diary feature. He thanked us and appreciated us for thinking of him, but he didn’t want any distractions during camp. We certainly can’t begrudge a guy for that at all. His ceiling is high and the team and front office is excited to see him this preseason continue to develop.

Question: Can you explain the whole Gerald McCoy tweets about Ronde Barber? What happened?

Answer: There really hasn’t been any official explanation given by anyone, but it appears McCoy took exception to some comments Barber made when asked if this football team was “bad ass.” In an article Barber said, “I love Gerald (McCoy), but for a defensive tackle to drive a team, he has to have a huge personality. I mean like the personality of (Warren) Sapp or a John Randle.”

McCoy took to Twitter the next day, but didn’t name Barber specifically but it appeared his tweets were directed at Barber. You can read more here in a story done by Trevor Sikkema last week. As you can see in the picture below, it appears Barber and McCoy are just fine and things were probably blown a little out of proportion. Question: Why hasn’t Jason Licht gotten an extension yet? He has done something in 3 yrs that Bruce Allen and MarkDominik could never do, build a contender.

Answer: I don’t think it is very far off to be honest. I agree Licht has done a  tremendous job of building this roster and putting this team is a position to compete for a playoff spot. He gambles, and isn’t afraid to take a risk. Some pan out (Ali Marpet, Jameis Winston) and sometimes they don’t (Michael Johnson, Anthony Collins). But for every Austin Seferian-Jenkins there is a Cameron Brate. Mistakes will happen. Circumstances, bad scouting and so on, but a big part of team success is finding those hidden gems. Licht and his staff have done that as well as any team over the last few years. I think the only thing that could derail an extension would be a complete bust to the start of the season where this team just implodes. And I just don’t see how that happens.

Question: Besides Winston and Evans who do you think could have a fantasy football impact this season?

Answer: Cameron Brate. I am far from a fantasy expert, but I know what I see on the field, and nearly every practice, 15 minutes after the rest of the team is done, Winston and Brate are working on red zone routes. And sometimes it is other joining in, but you can almost always count on No. 84 being a part of it. Evans will get his share of looks – and touchdowns as well – but despite the Bucs spending a first round pick on a tight end, it is the undrafted Harvard grad that Winston has a tremendous chemistry with and that should equate to Brate matching, or even exceeding, his touchdown reception number (8) from last season.

Question: So what do you think the RB situation will look like once Doug Martin is back?

Answer: That is the million dollar question but one no one who doesn’t travel with a crystal ball can tell. There are still way too many variables including potential injuries to even begin to forecast it. From what I have gathered listening to Koetter and Licht is, they feel the backs, Jaquizz Rodgers, Charles Sims and Peyton Barber, will be just fine in filling in for Martin until his return. There is no sense of panic or even concern for that matter. I am guessing it will be a platoon situation, and then the team going with the hot hand. And my money is on Rodgers carrying the load for the most part. And depending on how he does during the first three games, will determine Martin’s playing time once his is eligible. If Rodgers averages 4.5 yards per carry and over 100 yards a game, and the team is 3-0, why would Koetter change things up? But Week 4 in the season is a long way away, so trying to figure it out now is nearly impossible.

Mark here is a question that I am surprised no-one has asked yet (unless I missed something), why is Winston wearing a leg brace?

Its been reported in the training camp summaries. He had some soreness so he started to wear it, and is sticking with it as a precautionary measure. There is no major injury.

Testing it out to see how it feels on him;. Several QB’s use it as a precaution; not sure if he’ll actually wear it for very long though.
Mark, time to let the Barber McCoy thing go; It don’t mean nothin, as we used to say in NAM.

Mark Cook may be along any minute to answer Spartan’s question. Now I don’t know the answer for sure, but I can tell you what I saw. On Friday, Gerald McCoy got too close for comfort. Some say they noticed a mild limp – I didn’t see that. On Saturday, Winston wore a rigid brace. Coach Koetter said no injury, no problem, just testing standard equipment to get a feel for comfort. Sunday, Winston wore a different soft brace. Koetter re-emphasized, no problem. On Monday, he wore no brace. So there. You guys can figure it out from here and… Read more »

You are a wise man macabee. They couldn’t fool you with that fake news about equipment testing.

I wonder if the steelers would be willing to make a trade. Doug Martin and a 3rd pick fir bell. Bell hasn’t reported to camp and has yet to sign his franchise tag. If they aren’t going to sign him long term why not trade him.