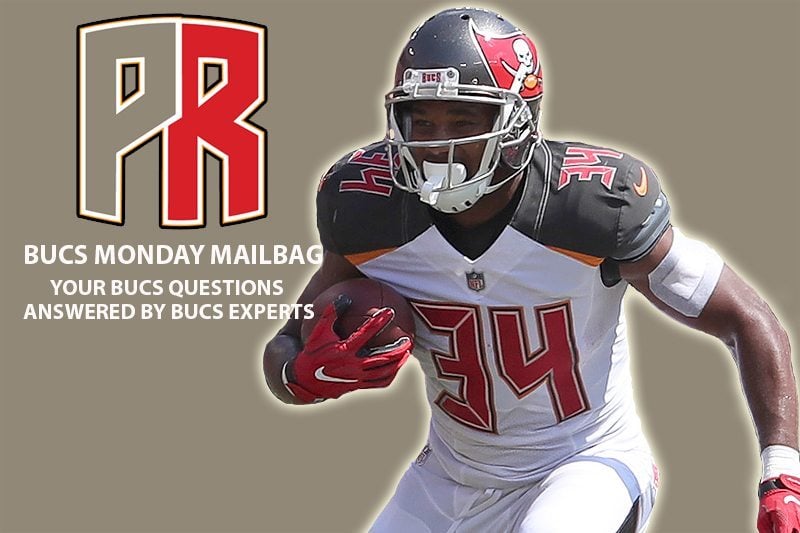 It is Monday and that means time for another Monday Mailbag where PewterReport.com answers your submitted questions from Twitter and the message boards. If you would like to have your question answer, submit using #PRMailbag

Answer: Trying to figure Charles Sims out can be frustrating for Bucs fans, the media and probably even the coaching staff. He is a very talented football player. But in what role exactly? I think we saw the good and bad of Sims on Sunday against the Bears. The bad was running with hesitancy on the third-and-short and later the fumble, and the good when he blew by his man on the wheel route that should have been an easy touchdown. He is a complimentary back and can make stuff happen in space a lot more than Barber, or really anyone on this roster. But you have to trust him when he is on the field, to even give him the opportunity to make a splash play. I do think in the future it will be Rodgers or Barber handling the short-yardage situations moving forward. Sims will help this team win some games this year if he stays healthy, but everyone hopes he also doesn’t help to lose any.

Question: Will Kwon Alexander play next week?
Answer: If up to Alexander, then yes. He was quick to say he would be fine and back on the practice field this week when we spoke to him in the locker room following the win on Sunday. But he also isn’t a doctor, and the team isn’t going to rush him back. They will need Alexander this season, and hamstrings are one of those things that can be nagging, and also can be made much worse if proper time isn’t allowed for them to heal.

The good news is, Kendell Beckwith looked very solid in relief on Alexander on Sunday, and there wasn’t a major drop off from our vantage point up in the press box. It really is an incredible feat to see Beckwith not only come back from an ACL in none months, but to be playing really good football.

Question: When the Bucs signed Chris Baker, it seemed like he would be the answer to a DT to play beside McCoy. But it seems like Baker has been almost invisible. Very little in preseason and virtually nothing against the Bears.

Answer: The Bucs knew what they were getting when signing Baker from the Redskins and believe they got some of that on Sunday. Let’s face it. Baker is no Warren Sapp when it comes to practicing, and I have wondering a few time how those two would get along if they were teammates. But despite not really showing up in the stat sheet, you have to give Baker credit for being part of a defensive line that only gave up 20 yards rushing on 16 attempts.

Question: Not going to share my opinion, but curious as to what the rest of you think… specifically of Winston’s deep balls?

Answer: I will share mine, and my opinion is, it has to get much better. I was a little surprised to see Winston miss three opportunities, especially with the improvement we saw in the preseason and during camp. Even Todd Monken and Dirk Koetter have mentioned that as an improvement going into the game. But it didn’t translate well on Sunday. But I also saw Tom Brady and Aaron Rodgers miss some deep balls over the last two weeks. Deep balls are pretty low percentage generally speaking. In a game like Sunday it didn’t really matter, but most games come down to handful of plays, and missing three scoring chances can cost the team wins. Overall, I was pleased with the play of Winston. He was in command, made mainly good decisions and was his usual strong leader.

I’ve said this in other threads as regarding Chris Baker. People forget that there was one reason the Bucs signed Bake – to clog up the middle and boost our sorry run defense from last year. Run stuffing in the middle is a thankless job – just witness the question above – but someone’s gotta do it. In case nobody noticed, with Baker in the middle we held the Bears to 20 yards rushing yesterday. That is compared to the 125 yards the Bears rushed for just last week against the Falcons, the defending NFC champs and one of the… Read more »

A run clogger may be the most thankless position in football.

Exactly. DTs like Baker are space eaters – Their job is to occupy blockers. I also saw him (I have a recording of the game) push the center back preventing Glennon from steping into his throws more than once. As you said playing that type of DT is totally different than the style a McCoy or Sapp played. Those two both had/have great straight line speed and quickness. I played nose tackle in high school and straight line speed is not nearly as import as how fast your first 2-3 steps are. A Sapp or McCoy type DT wants to… Read more »

Jury is out on Baker. He’s lazy IMO and could likely be better. Doesn’t like to practice? Likes to get that pay check though. If we keep holding opponents to well under 100 yards a game then I guess he was worth it. Will see….

Sims to me is a head scratcher. Maybe he should just play WR. Lol. He seems like a WR trying to play runningback to me.

So it must have been you in the middle of the D-line, clogging up the lanes and holding the Bears to 20 yards yesterday, as compared to the 125 yards they gashed defending NFC champ Atlanta for a week ago .. instead of that lazy Baker dude.

Geesh guy, you’ve made some doozy dumb comments here at PR before, but that one takes the cake.

I went back and watched the game to get a better chart of Winston’s overall passing day. He was 0-4 on deep balls yesterday. -1st Quarter deep shot to DJax that was caught, but out of bounds. Good play. Good throw. -Also in 1st Quarter DJax was held up on his route and that looked like it slowed him just enough to miss the spot Winston threw it to. Hard to put that miss on him, as it was a good ball and DJax’s timing got thrown off. -2nd Quarter Sweezy gets beat as Jameis hits his drop. The throw… Read more »

Takes time to get adjusted to how much juice or air to put on the ball especially with a new WR. I heard a comment made in another game that even QBs who are playing with the same WR as they did last year are still working out the kinks. Its a good idea this early in the season to use more intermediate timing and crossing routes and keep practicing the finesse throws. One miscue by DJax was he failed to come back enough on an out route where he was supposed to. They’ll get it worked out though. Maybe… Read more »

Love that you guys are using quotes from the forum! Great work PR!

IMO the deep ball will come maybe a little RUST in Bears game.
I liked coach saying P.Barber may get Moore carries he may not take it 60 + yards but on 3rd and short making those tough yards and keeping the O on the field is critical.
47 yards on 10 carries 4.7 average that will win close games. Go Bucs!!!

First, let’s talk deep balls. The one for Simms was too long but would have been perfect for Jackson. It’s hard to change up from one player to another. One of the deep balls to Jackson was the receivers fault as he made the wrong adjustment to the ball. There should have been 2 more touchdowns scored that were missed by millimeters. It will come. What impressed me was Winston’s management of the game. Yes, there were a couple of balls that were almost intercepted but that was due to great play by the secondary and not because of bonehead… Read more »