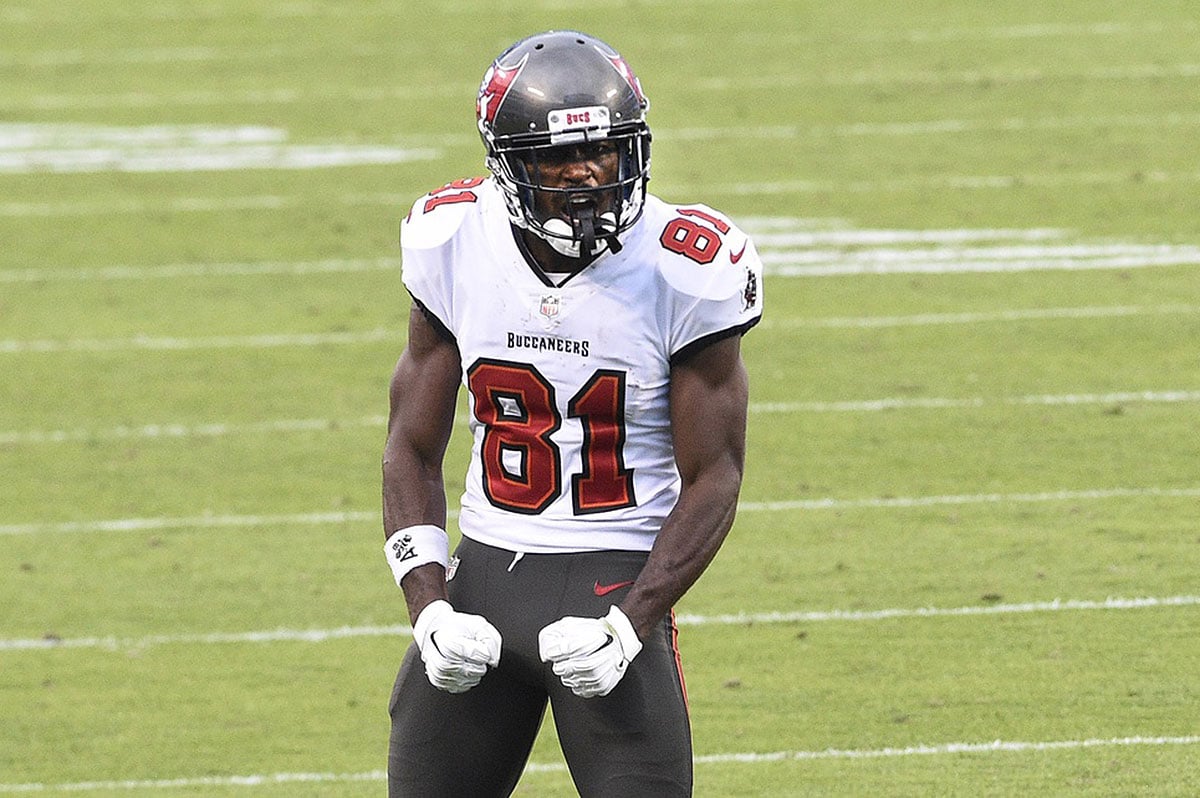 After an announcement in late April that the Bucs and wide receiver Antonio Brown had agreed to terms on a one-year deal, the former All-Pro pass-catcher officially put pen to paper on the expected contract.

The process of re-signing Brown took longer than expected, after Bruce Arians revealed the 7-time Pro Bowler still needed to pass a physical following a minor knee scope last Tuesday. Arians told the Pewter Report Podcast that it was the first time Brown had ever had surgery in his life. Last week Brown passed the physical without issue, paving the way for the veteran receiver to re-sign in Tampa Bay.

After a year away from the NFL, Brown returned on a one-year deal with Tampa Bay in 2020. Brown joined the Bucs in Week 9 after serving an 8-game suspension and finished the year with 483 yards and four touchdowns on 45 receptions. All of his touchdowns came over the final three games of Tampa Bay’s season. In the postseason, Brown hauled in another TD in the Bucs’ Wild Card win at Washington, but suffered an injury the next week against the Saints that forced him out of the divisional round game. The injury also kept him out of the NFC Championship Game against the Packer,s but wouldn’t end his playoff run. Returning for Super Bowl LV against Kansas City, Brown had five catches for 22 yards and a touchdown. That score gave the Bucs a 21-6 halftime lead.

With all 22 of the Bucs’ starters returning for 2021, including each of their major offensive weapons and a healthy OJ Howard, Tampa Bay is once again primed to be one of the most dangerous offenses in the league.

We need to use the Chiefs formations more often; 3 receivers to one side, 1 on the other. Evans, Godwin, Scotty Miller and AB.

It’s tough to do that with Gronk and OJ on the team. We obviously just have an absurd overabundance of skill position depth and diversity of skillset. I would love to see some of what you propose, but it’s not like there are really any wrong answers on this team when it comes to personnel groupings when we’re healthy. Depending on the situation, they’re all incredibly dangerous.

Didn’t say over hyped or healthy?

Did he; not didn’t

Why do you bother commenting here? Nobody cares for your opinions which are universally negative and destructive not constructive.

I didn’t know OJ Howard was healthy? I thought he had a ways to go with his Achilles heel surgery? I didn’t realize somebody could come back that fast and be ready to start day one training camp, preseason games, and all the regular season games?

The normal time to heal a torn achilles tendon is around 6-8 weeks, with a full return to sports performance occurring over a pretty wide range of 4 to 12 months. OJ was injured in Week 4 last season, so a return to practice in training camp this summer is entirely within the normal range of recovery. Whether he is 100% in training camp, or at some point a little later on, is to be determined.

He’s also pretty young still, which bodes well for any player coming back from injury. It wouldn’t be shocking for him to struggle to get back to his peak physical form, but yea, it also wouldn’t be crazy for him to be ready to hit the ground running in training camp. If he can, the sky is still the limit for him this year if he can just stay relatively healthy. It will be interesting, if he is healthy and at his best, to see how the team utilizes him and Gronk. Up until OJ got hurt, Gronk was so… Read more »