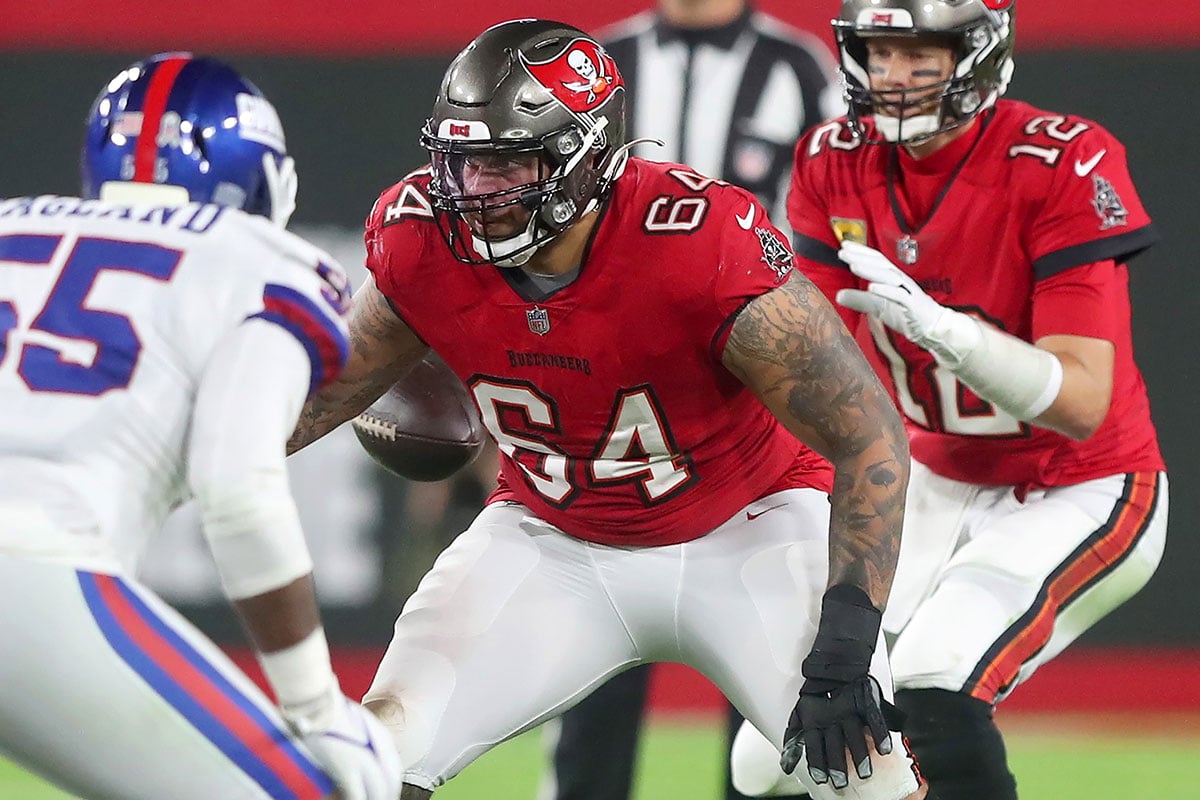 The biggest change to the Bucs roster this offseason has undoubtedly come at guard.

Replacing Marpet won’t be as easy. There will be at least a three-man competition in training camp between Aaron Stinnie, Robert Hainsey and Nick Leverett to fill Marpet’s vacancy at left guard.

Attending the Arians Family Foundation golf outing this week, Gilbert shared his thoughts on the new outlook at the guard positions. “We’ve got Shaq coming in at right guard,” Gilbert said. “We feel really, really good about him.”

On the other side of the line it’s much more open-ended. Stinnie, who was re-signed to a one-year deal, has the most experience, which he received during the Bucs’ Super Bowl LV run.

Hainsey, the Bucs’ third-round pick last year, spent his rookie season learning the center position after playing right tackle at Notre Dame. Now he’ll be cross-trained at guard and thrown into the competition.

Leverett might be the most versatile of them all. He played left tackle and center in the preseason. Then he played left guard in the Bucs’ comeback win at Indianapolis last year, which was his first regular season action.

Would this rule out the Bucs selecting an another guard in the 2022 NFL Draft this week? Certainly not, and they might even look at drafting a center and transitioning that player to guard, according to Gilbert.

“There’s a few guys in the draft based on wherever it falls,” Gilbert said. “First, second, third round, there’s some really good guards, a couple good centers that could play guard. Between those guys, obviously we’ll be in pretty good shape. Fill that one last spot and I think we’ll get up and protect Tom (Brady) and run the ball effectively.”

Quit talking about drafting for the future. The future is right now. Use the fourth and the two sevenths to move up in the first three rounds to get us some players who have the ability to start in the 2022 season. If Licht pulls another Kyle Trask blunder he needs to be fired.

Fired?? You another bandwagon bozo?
The guy has built a great roster that is 1 year removed from winning it all and won 13 games last year.
Of course you draft for the future. Sure if they get a couple guys who can contribute this year that’s great. But there isn’t a need to trade up in this particular draft.
Other than that you make perfect sense.

Out of all of your constant bemoaning of the Trask choice, this one might take the booby prize. If we should only think about the 2022 season, because you have this perception that the team will suddenly become the Yucs without Brady, then the real “Best Bet” would be to combine the George Allen “The Future is Now” and Mike Ditka “One Draft Pick” approaches and trade our entire 2022 draft class and perhaps 2023 for a few more old veterans or Aidan Hutchinson. We all know how rare it is for a rookie to be much of an impact… Read more »

Personally I think the Bucs should be shopping Kyle Trask for a high second. Never know who might be thinking Trask has what it takes. We could use the draft pick.

I agree with this completely the two 7th round picks should be combined to further our draft positions.

Most likely Stinnie wins the spot I bet. We do not need to draft a guard and shouldn’t this year imo. Much bigger needs for sure.

I would make a list of all positions where we’d be screwed if a starter went down. Those are our needs because other than the year we won it all that is what happens in the NFL. You’ll be surprised how many positions end up on that list.

I don’t see Stinnie being the starter; my guess it will be Hainsey. I believe he has more upside.

Stinney looked pretty damn good in the Super Bowl run. I know it’s a small sample size but it was also cream of the crop opponents.

Right side could be special, but Aaron Donald will cook on our left side!
Stinnie is JAG, Hainsey was a Day 3 G/T prospect taken at the end of the 3rd round for his potential at Center (still a project), Leverett isn’t starting material (bad tape in pass protection)…
Stinnie is the clear 1 but if he struggle early, Hainsey could be an option…
i’ll be afraid to pass on a very good Guard class for those guys.

I anticipate a drop in the statistical efficiency of Donovan Smith now that Marpet is gone… so I hope we can locate a solid starter in the Draft – and not simply cross our fingers with reserves like Stinnie, Hainsey etc.

Last edited 2 months ago by CrackerBall