Inside Bucs OTAs 5-25: Godwin Impresses; Winston Sharp, Fitzpatrick Not So Much

Home » Articles » Inside Bucs OTAs 5-25: Godwin Impresses; Winston Sharp, Fitzpatrick Not So Much

Inside Bucs OTAs 5-25: Godwin Impresses; Winston Sharp, Fitzpatrick Not So Much

Home » Articles » Inside Bucs OTAs 5-25: Godwin Impresses; Winston Sharp, Fitzpatrick Not So Much

There’s only so much that can be taken away from springtime practices in shorts, but these organized team activity sessions are held for a reason. If they were unimportant and useless, the Bucs and 31 other franchises wouldn’t waste their time.

Thursday was the second such practice open to the Tampa Bay media. For fans who attend training camp, the sessions are similar in format. Players break up into groups by position for drills, the offense and defense move into install mode in preparation for 11-on-11 and 7-on-7 work, and so on.

Prior to scrimmages, the most notable offensive absence was wide receiver DeSean Jackson. Fellow wideout Mike Evans was on the practice fields, but did not participate.

In the absence of Tampa Bay’s top two targets, rookie Chris Godwin could shine. The third-round selection out of Penn State showed off his hands once again and head coach Dirk Koetter took notice.

“Yeah, Chris is off to a fast start,” Koetter said. “Like I said the other day, Chris and O.J. [Howard] are both doing fine. O.J. has showed up probably a little more as a blocker than a receiver the first couple days, but Chris – a couple small mental blips – but the physical stuff is there for sure.”

Howard, the Bucs’ first-round pick out of Alabama, didn’t see many passes come his way during scrimmages and incumbent pass-catching tight end Cameron Brate was the first to run routes in each drill Thursday. 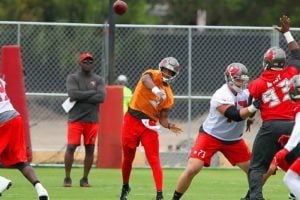 As for the quarterbacks throwing the passes, starter Jameis Winston looked sharp while new backup Ryan Fitzpatrick struggled to hit his intended targets. Crossing route passes were being thrown behind receivers and a few more sailed on the 34-year-old.

Winston did have a couple passes picked off – “two too many,” according to Koetter – but he looked smooth and his passes mostly found their marks.

One nice thing to see was a nearly full stable of Bucs running backs with chinstraps snapped and participating in full. Doug Martin, Jacquizz Rodgers, Charles Sims and Peyton Barber led a group of eight backs vying for roster spots and touches. They were all high-stepping over pads, making cuts and catching passes. There’s a high rate of attrition at the position and everyone staying healthy for 16 games is a pipe dream, but it’s nice to see for now.

One running back again not participating was rookie Jeremy McNichols, who is recovering from shoulder surgery.

Speaking of staying healthy, the offensive line. The expected starting first unit lined up together throughout scrimmage periods and Koetter made it a point to address its new look, even if it includes no new acquisitions.

“Many people have said that we didn’t do anything to address our O-line,” Koetter said. “I would flip that around and say that one of our top free-agent gets from the year before who was out all last year [is back]. He’s looked awesome out here.”

J.R. Sweezy is who Koetter was referring to and the 28-year-old lined up at right guard throughout the afternoon. Filling out the first-unit line was Donovan Smith at left tackle, Kevin Pamphile at left guard, Ali Marpet at center and Demar Dotson at right tackle.

It’s impossible evaluate any lineman’s performance during pad-less practices, but the fact that Sweezy has been going through drills is a big step in the right direction.

“J.R.’s off to a fast start,” Koetter said. “But, again, a guard is going to have a tough time being too dominant in shorts practices.”

Godwin is going to quickly become a fan favorite.

God I am excited about our team this year.

You said “Dotson is getting old’, twice. Reminds me Blazing Saddles when they were interviewing criminals. When the interviewer reminded the bad guy that he mentioned rape twice, he said, “I like Rape”.

So….. do you think Dotson is old? He’ll be 32 in October at a position that can be played well into the 30’s. I think this OL is going to be pretty damn good but that’s just MHO. The Buccaneers obviously feel the same way. We’ll see.

Just got around to watching Godwin tear up USC in the Rose Bowl.
What an awesome performance. This BUCS receiving corps is the best I have seen on any BUCS team.
GO BUCS

Does Marquette playing at Center mean this team does not have confidence in Hawley?

Hawley and E.D.S. Were both mediocre at best at center that’s why Marpet is in there. We got pushed back a lot up the middle and big part of why we couldn’t run ball last year. Other reasons too of course.

I think Hawley played hurt most last year and got over powered somewhat. He’s had knee injuries so going with the younger, stronger guy with the vet as back-up makes sense.

Nybucguy agree with all your points. I do think Dot has few good years left though. Hopefully he plays better this year. Pamphile is still learning for sure. He is good run blocker I think. Sweezy is huge question mark. Even if he’s healthy he wasn’t a pro bowler in Seattle. Marpet should be an upgrade for sure at center but he’s knew in the position. Maybe Sweezy’s back will be fine but maybe he won’t mesh well with our line. Who knows. I think on paper the O line could be lot better this year if all starters stay… Read more »

Yo watch this team strike fear into the rest of the league! Bucs will be blowing ppls minds! I can’t wait till we whoop the patriots butts! I I’ve in western New York and am a buffalo bills fan secondly. Bucs number 1 favorite team all day everyday. Oh yes I will be going to the bills vs Bucs game at new era field this coming year. ‘Speak softly and carry a big mother fucking stick!

Pamphile’s best position is RT since he was a basketball player just like Dotson and is a good pass blocker. If Dot is playing like his old self it is alright for Pamphile to get more work at LG, but if Dot plays like he played at the end of last year he needs to just be a backup and Pamphile should play RT. EDS was a Guard with Green Bay before he played Center only one year. He was decent at LG filling in for the Bucs and should play there if Pamphile moves to RT.