Bucs Tender One RFA, Pass On A ERFA Defensive Lineman 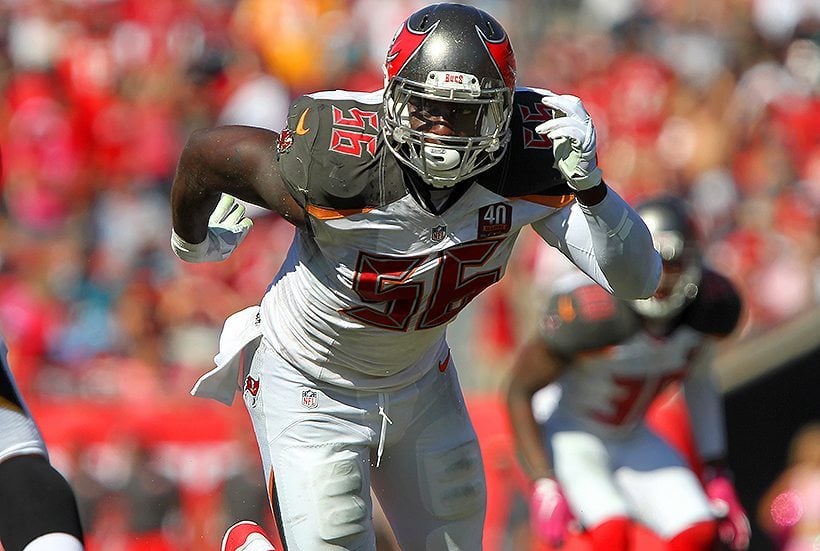 Bucs Tender One RFA, Pass On A ERFA Defensive Lineman

The pre-free agency run by the Bucs continued on Tuesday with the team making decisions of two defensive players.

Jacquies Smith, who many expected to possibly reach double digit sacks last season for Tampa Bay, but was injured in the season opener, received a one-year, $1.8 million dollar offer from the Bucs.

Howard Jones, who was injured later in the season was not tendered an offer from the team. By not tendering Jones, he now becomes an unrestricted free agent. The tender to Smith does allow the team to match any offer from another team, however if they refuse the Bucs receive no compensation.

Smith has tallied 13.5 sacks in his three NFL seasons, and added 39 tackles, four forced fumbles and three pass breakups. A speed edge rusher, many thought Smith was primed for a breakout season but was injured in the Bucs season-opening win over the Falcons covering a kick on special teams.

Jones had five sacks in 2015, but failed to record one in the first eight games of 2016 before injuring his knee in the Thursday night loss to Atlanta at Raymond James.

In other free agency Bucs news, the team is expected to allow wide receiver Russell Shepard and cornerback Josh Robinson to test the free agent waters on Thursday. But the team has a desire to retain both players who are special teams standouts.

No one is to blame for the Bucs not resigning Howard Jones.

Damn where did the LIKE button go. Love this!

I have an ‘Everlasting Love’ for good 80s music puns.

Interesting? Jones and Smith might both be gone from the team.

Very happy about re-signing Jaq Smith! He can be an excellent pass rusher at times.