Bucs vs. Giants: Most Impressive 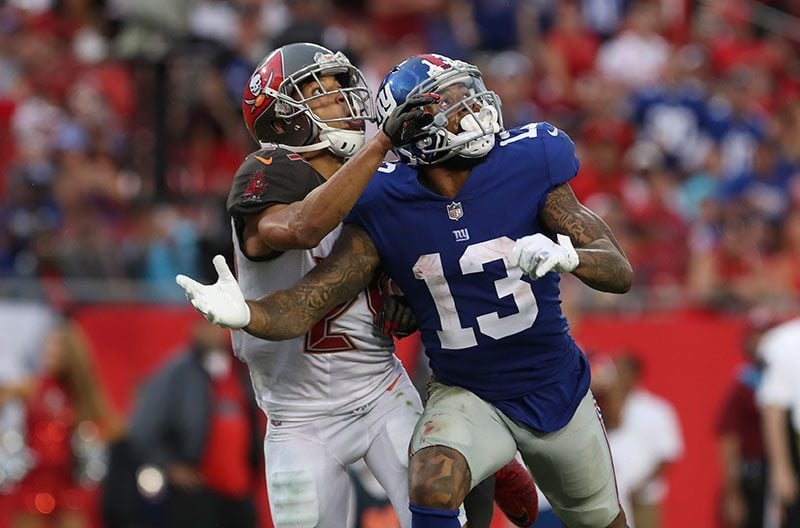 Bucs vs. Giants: Most Impressive

There’s a hero in every story. But, in the story of the Tampa Bay Buccaneers beating the New York Giants, 25-23, there was certainly more than one – as the players always say, it was a team effort.

These were our most impressive players from the Bucs thrilling, last-second win over the G-men in Raymond James Stadium on Sunday evening.

The key here is zero, nada, zilch. That’s the number of turnovers Winston threw against the Giants on Sunday. That’s what made all the difference.

Outside of that, Winston finished the game 22-for-38 with 332 yards and three touchdowns. He was a little hot and cold throughout the game, but when it mattered, delivered one of the most perfect touch passes you’ll ever see to Cameron Brate on the game’s final drive, which set up the game-winning kick.

Before the game on Sunday, Rodgers had been having a pretty lackluster season two games in. But, on the final game before Doug Martin’s return, Rodgers saved his best starting performance for his last one with 83 yards on 16 carries and 25 receiving yards on two catches.

Though those numbers don’t pop out at you, it was Rodgers who held the balance in this game. The team obviously trusted him to keep the clock moving and control possession, and he did just that. His consistency was a key to the game.

During the draft, this team went out and spent a high draft pick on tight end O.J. Howard, and it really paid off today with a big 58-yard touchdown.

And yet, Cameron Brate was still the top tight end for the Buccaneers.

With 80 yards on four catches, which included on touchdown, the chemistry and connection between Brate and Winston is the recipe to win games and keep a hot and cold offense more hot than cold.

Evans once again led the Bucs in targets with 11 and hauled in five of those targets for 67 yards and a touchdown.

He and Winston have as much confidence as any quarterback-wide receiver duo can have. In an offense that is still figuring out how to distribute the ball properly, Evans’ usage and emphasis is a constant. Evans even had a touchdown that was called back because of offsetting penalties that could’ve brought his good day to a monster day.

Boy, did the Bucs miss Brent Grimes last week, and were they happy to see him back this week.

Grimes didn’t finish high on the tackle list with just five and didn’t come up with any stops behind the line of scrimmage, but he did have a few key passes broken up, specifically on Odell Beckham Jr.

Without Grimes, I’m not sure the Bucs could have contained Beckham the way they did, and that would have likely meant more points from the Giants and a loss as a result.

With all the passing weapons on this team, Humphries still makes his mark on a weekly basis. This week he was huge. His 70 yards on six catches was second-most on the team, and 38 of those yards came on the second to last drive of the game which ended in a much needed touchdown.

Humphries showed a lot of grit in this game – all stereotypes aside. He was running through contact, making tight catches, and on a few instances, refused to go down. All of that added up to him making plays that impacted the scoreboard, even without a touchdown next to his name.

Trevor Sikkema is the Tampa Bay Buccaneers beat reporter and NFL Draft analyst for PewterReport.com. Sikkema, an alumnus of the University of Florida, has covered both college and professional football for much of his career. As a native of the Sunshine State, when he's not buried in social media, Sikkema can be found out and active, attempting to be the best athlete he never was. Sikkema can be reached at: [email protected]
Subscribe
Login
Please login to comment
26 Comments
Oldest
Newest
Inline Feedbacks
View all comments

I would add McCoy….lot of tfls early

Yes, McCoy could be on here, too.

Not could; should. He was dominate.

Receivers also dropped three or four very catchable balls including Howard and Evans. Both would have resulted in first downs.
Of course so did Manning’s receivers, including Brandon Marshall.
Grimes clearly frustrated Beckham during the game.
Sure did like Rodgers running the ball today.
Still, after watching Mike Glennon on Thursday night, I am still puzzled why this team didn’t give him more of a chance.
I will repeat again, would someone please call Dwight Feeney.

They didn’t “drop” those balls, they were jarred loose. People take like NFL hits are like our wives tapping us on the shoulder. I would challenge anyone to go out there, take hits like they did today, and hold on to the ball.

There was one that I thought Evans could have held on to though.

Surely you’re joking about Glennon. His big chance in Chicago lasted all of 4 games after his benching announcement today. He was likeable and a consumate team player but a franchise QB he is/was not. At least he got paid (this season anyhow).RIP Glennon Mob……GO BUCS! We have our franchise QB, go Jameis !!

Grimes did not play as poorly as Hargreaves, but he did not play well either. I posted a longer explanation in the first PR released after the game, but in short the Giants left a lot of plays on the field in the passing game that had more to do with errant passes, dropped balls and an injured Beckham that good play by Grimes. Our CB’s are just giving up too much space to the guys they are covering.

Pink, we must have not been watching the same game.

Got to disagree with you on this one my friend. Grimes might not be the player who used to give us fits, but he’s still pretty darned good in my eyes.

Also, I would put Humphries at the top of this list. He played great today.

It’s not in order of importance. Humphries effort plays were crucial in this game.

Give some props to Kendal Beckwith and Glanton filling in for Kwon and Levonte. These guys held their own. And Beckwith starting in his third game, called the defense, played almost every defensive snap. And still less than a year after ACL surgery. Sure he missed some calls, but I think we held NY to less than 100 yds rushing. Heck of a game for both of these guys.

They did hold their own admirably.

Yep, for sure. Rookie Kendall Beckwith led the team with 9 tackles and led the defense. Glanton got his first start and collected 9 tackles and defensed a pass that would have been a third down conversion. Dang good for backup at their respective positions!

Some fans like to play fantasy football. Some other fans (such as me) like to play fantasy sportswriter once in a while. With that in mind here are some post game throw aways from today’s Buc’s game. In order to become a championship caliber team you’d definitely need a reliable kicker who has a very a high percentage success rate. Next spring I anticipate the Bucs will continue the quest they started when they selected “you know who” in the second round last year. I expect the Bucs will attempt to acquire a reliable high quality running back somewhere in… Read more »

I think we should trade up and go after the Gator’s kicker in round 1. He’s great!

It was obvious all the Buc’s Players were putting out a maximum effort to win this game, and our backup linebackers played extremely well. If they can keep that up Thursday night they should have a shot at New England, who lost to Charlotte today!

Surprise…surprise…when the chips were down Brate and Humphries were money.

Bucs offense is a RB way from being a complete offense. Lets hope Martin returns with some hunger Thurs night.

I was impressed with our players standing tall on the sidelines.

Lots of players to be commended. Add OJ Howard to that list – the rookie had the biggest play on the field all evening with his 58 yard touchdown reception. Just because he was uncovered doesn’t take anything away. His ability to sell the run was what helped him get so open.

When the Bucs drafted Beckwith I had no idea what the Bucs were doing BUT I DO KNOW! Also I have seen Glanton play in spot duty and thought he played well I believe this was his first time playing complete game he did a very good job.
I agree with DrD. Why not take a look at Feeney.

Tough win that should have been a blowout, but glad to see Jameis lead the troops to a win despite our continued kicking struggles. It’s funny we had a kicking battle all camp with kickers that were ok and Oakland was able to sneak Giorgio Tavecchio to their practice squad while they waited on Janikowski to sort through his back issues. Tavecchio is perfect on all FG and XP attempts. Whomever we have evaluating and making the decision on place kickers needs to relinquish that responsibility. There are better kickers on practice teams around the league than we have kicking… Read more »

Anyone complaining about the defense needs to remember that Lavonte David and Kwon Alexander were both out Sunday, and they’re two (imo) of the top 20 LBs in the entire league, and much better blitzers than who the Bucs put out there yesterday. When David and Kwon are back on the field, the pass defense gets a lot better from better coverage over the middle and a stronger pass rush.

Also, not listing McCoy as impressive is just wrong. Dude blew up the Giants like JPP blew up his hand a couple years ago.

I agree with some other post VH3 I a weak link. In Sundays game he got beat on a long pass but Eli just over threw by inches.
I have said before and will again Bucs need faster and longer CB’S.
VH3 is more suited as a slot Corner. IMO
GO BUCS !