Five Things We Learned From One Buc 11-15 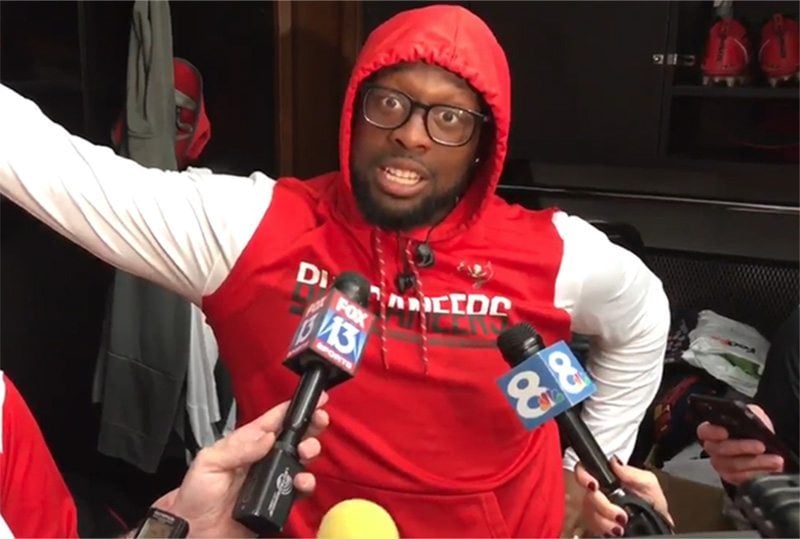 Five Things We Learned From One Buc 11-15

This was the first Wednesday after a victory in quite some time for the Tampa Bay Buccaneers. As you would expect, the mood was much better around the building. The players and coaches got to talk about what worked as opposed to what didn’t like we’ve been used to, and because of that, there were plenty of things to learn as the day went on.

These were the five things we learned from One Buc on Wednesday.

With an empty practice squad spot still open, it was announced on Wednesday that the Bucs have signed cornerback Senquez Golson following a workout on Tuesday.

Golson came into the league as a second-round pick in the 2015 NFL Draft. Golson, who played college ball at Mississippi, spent the 2015 and 2016 seasons on Injured Reserve in Pittsburgh. He was waived earlier this season.

#Bucs DE Will Gholston is getting some running work in on his own with a coach on one of the far fields. No pads or anything, but good to see.

The injury report looked thin for the Bucs today – that’s a good thing. There were no unexpected absences at practice.

Cornerback Vernon Hargreaves is nursing a hamstring injury that force him to leave the game against the Jets on Sunday, and after talking to head coach Dirk Koetter later in the day, it seems like he’s a long shot to play this week. Defensive end William Gholston, who left the Saints game on a stretcher due to a neck injury, was doing running drills on his own with no pads at practice. Very light work, but it was good to see him out there.

Then, of course, there’s Jameis Winston. Winston was not at practice and will miss another week due to his shoulder injury.

Mike Smith Has A Ninja On His Team

Mike Smith on defensive struggles on the road: "Going on the road is tough, but it's not that tough. We're making it too easy." pic.twitter.com/3Q0Do7U7cF

Wednesday is usually defensive day, as the media gets to hear from both defensive coordinator Mike Smith at the podium and – most of the time – from defensive tackle Gerald McCoy in the locker room.

At the podium, Smith addressed the failures of his defense performing on the road. The gist of it was simply that his guys have to get it done. They practice fine, they prepare well enough, and they know what to do.

They just have to do it. They’ll get a chance to this week in Miami.

On another note, when talking about 34-year-old Buccaneer cornerback Brent Grimes’ athleticism, Smith said that he think Grimes could be a finalist in the famous TV show American Ninja Warrior.

McCoy Is Chasing Someone

Gerald McCoy on the possibility of getting an extra sack from the Jets game, what that would mean, and mentions that he's chasing someone when it comes to Pro Bowl honors: pic.twitter.com/D2pSjfnF4Q

When McCoy is in a good mood, he’s always worth an ear. You can ask him a question that he’ll answer, but if his mind is on something else, he’ll let you know.

The question from the video above was just about whether or not McCoy was going to get an extra sack that the NFL was reviewing from the Jets game. He said he hasn’t heard from them, but he hopes so.

And then he said something that was worth noting.

He said that he would love to get the extra sack, because sack numbers help his chances to get Pro Bowls. He then said that he’s “chasing someone” in terms of how many Pro Bowls he’s going to make in his career. McCoy currently has five Pro Bowl accolades. Could he be chasing Warren Sapp, who had seven? Or maybe he’s chasing Derrick Brooks, who had 11, which is the most all-time for a Buccaneer.

Who ever it is, there’s someone motivating him.

#Bucs DT Gerald McCoy when being told about commissioner Roger Goodell's new $50M/yr contract: "He gets how much?! Five zero?!" pic.twitter.com/9lpAvyvklL

Probably the most “what we learned” segment from today was when McCoy was told how much NFL commissioner Roger Goodell would be making in his new contract and the reaction McCoy had to it (above).

McCoy was then asked if any commissioner is worth that much money. McCoy laughed, "that's a set up question," then mouthed a certain word without saying it… pic.twitter.com/DJZeFAeYMM

As a follow up, McCoy was asked if any commissioner of any league is worth making 50 million dollars a year like Goodell’s new contract is schedule to.

McCoy answered without actually answering, but you can see his opinion for yourself in the interview.

Is any worse than Jerry Jones though?

No doubt that Salary and the perks is way over the top, he should make no more than the league average salary, so $1.9 million with no perks after he leaves.

Is that his salary or the NFL commissioner’s office which entails several other salaries and other expenses?

I don’t think so that’s just him the way I understand it.

He personally gets 44 million now and he wants 50 million for his new contract. He is doing his own wrecking of the NFL himself. Why would he hire the liberal Bill Clinton Press Secretary Joe Lockhart to be the spokesman for the NFL? That tells you a lot about what he thinks. Bottom line I get season tickets. I need to see a policy on the national anthem before I put up the money again next year. Thousands more will do the same I bet.

If people would just ignore the increasingly moot issue it will fade away. All Bucs are standing and as far as I can tell so are the fans in the stands……except maybe DrD who said he was siting.

Why do you care what a tiny handful of NFL players do or don’t do when the anthem is sung? Go to any sporting event and roughly 1/3 or more of all the fans in the stands fail to take their hats off or put their hands over their hearts, per the accepted protocol. In any s. port, not just football.

It’s a free country, everybody is free to do their thing as long as it doesn’t harm someone else.

People are such snowflakes,taking offense at anything and everything, both left wingers and right wingers. Get over yourselves.

Actually Veterans can keep their hats on while doing their hand military salute at attention.

I am old enough to remember how Jerry Jones handled the transition after he purchased the Cowboys. I don’t care what his net worth is he proves the old adage that you can’t buy class. He will always be a Yahoo to me.

I can’t stand that egomaniac Jerry “Facetime” Jones either. No other owner tries to be on TV more than this douchebag. Never see the Roonies or Maras.

Goodell also wants his own private plane, not just for NFL business which he already has, but for private use. I’m more upset about his salary, and demands then any player exercising his 1st amendment rights to peacefully protest. I guess some don’t see how unfair this country has been to black americans. Look no further then what Goodell gets compared to the players. As for McCoy. I wish he were more concerned with chasing playoff appearances then pro bowls.

The First Amendment protects the indivual’s rights from the government, not the employer. It starts with, “Congress Shall Make No Law”, not “Roger Goodell Shall Make No Law”. As long as the NFL let’s them protest, then they can protest. As soon as the NFL tells them they can’t, then they can choose to stop or keep protesting and deal with whatever punishment the NFL decides.

Hey all! Quick question… I’m wondering about DC Smith in the Press Box up top on game days? I was having a conversation about this with an associate. I guess this provides Coach Smith with a complete view of defense and the field. Personally, I would prefer him to be on the sideline and hands on with the players as the go on and come off the field. Trevor… I was wondering if u might be able to shed some light on this and whether or not its ever been a topic of conversation with u guys? I just think…… Read more »

Been brought up before.

Thanks for that very informative response… Horse! So, who died and made you PR Moderator! If your not going to try to answer the question… then dont reply! I will post any question I desire, regardless of whether or not it has “been brought up before”!