The injury bug bit the Bucs repeatedly in 2021. The cornerback position felt the brunt of it early in the season, which left the front office searching for answers. One of those potential answers ended up being five-time Pro Bowl selection Richard Sherman, who was signed to a one-year deal after spending the early part of the season as a free agent.

Sherman was needed right away. He played 98% of the Bucs’ defensive snaps against the Patriots just days after signing. He then played two more games before suffering an injury that kept him out until December. The veteran corner eventually returned and saw brief action in a couple of games late in the season.

But he largely worked in a mentorship/coaching role for the young cornerbacks in Tampa Bay’s locker room. That was a role he was especially good at. He even wore a headset for the Bucs’ 38-3 win over the Bears in October while the team had coaches missing due to COVID-19 cases. Not long ago, it became clear that Sherman would transition into broadcasting when his playing days came to an end. And in a Tuesday night appearance on NFL Network, he confirmed that he will be working as part of Amazon’s NFL broadcasting crew this season. The 34-year-old did, however, say he would be staying in shape so that he could be ready if a team comes calling for him late in the season.

“I’m still leaving that door open, you know, as long as I can. I’m obviously gonna keep training and stay in shape,” Sherman said. “But you’ve got to take the opportunities when they’re there. This is [an] amazing opportunity with Amazon, so I couldn’t pass it up. But I’m gonna leave that door open. If somebody wants to call [in] late December and they need some help, [I’m] happy to help.”

.@RSherman_25 joined our @wyche89 to announce that he will join the @NFLonPrime broadcasting team this fall, but isn't closing the door on his playing career just yet 👇 pic.twitter.com/Wpa95TUsQY 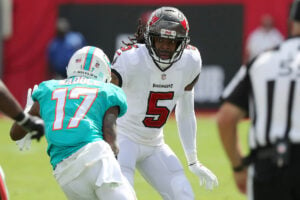 Sherman’s tenure with the Bucs was short-lived, especially in terms of his on-field role. With injuries to Sean Murphy-Bunting and Jamel Dean, Tampa Bay brought Sherman in for its Week 4 matchup in Foxboro against the Patriots. After just three days of practice, he played a major part in the defense.

His responsibilities grew even bigger, too, when Carlton Davis III went down during the game. It was a tough position to be in. However, Sherman made the most of it, recovering a fumble and recording seven tackles. The Bucs won, 19-17, to give Tom Brady a victory over his former team and improve their record to 3-1.

After playing such a high percentage of snaps in that Week 4 win, he once again played 98% of the defense’s snaps in Week 5. The Bucs won that game, 45-17, over the Dolphins. The following week, Sherman left the team’s 28-22 win over the Eagles with a hamstring injury. He didn’t return until a Week 14 over the Bills. In that game, he came through with his lone interception as a member of the Bucs. He then hit injured reserve again in January, ending his 11th NFL season early.

In his appearance on NFL Network, he seemed to throw a bit of blame the Bucs’ way for his hamstring injury. It was out of necessity, of course, but the team did have him play three games in 12 days immediately after signing. When asked about his health right now, he said he has something left to give if a team puts him in the right position. That was when he hinted that the Bucs may have put him in a not-so-favorable position.

“I’m good to go. As long as they don’t throw me in there for three straight games fresh off the streets, I’ve got something in the tank,” Sherman said. “But right now, I’m really excited and focused on this Amazon opportunity. It’s the first time you get to talk the game [and] feel the atmosphere.”

Let’s hope and pray we don’t need him again late in the year! No more CB injuries please.

Man that’s crazy, you sign a player because you need him and he complains about being needed? Isn’t that why you were signed?

Excellent point. You summarized this perfectly

You’re right about that Knight. I’m sure the Bucs believed him when he claimed to be in great shape and didn’t expect him to play right away either, but I’m pretty sure he expected to line up at the pay window. I don’t think some folks realize how decimated by injuries the secondary was last season.

LMAO here. Leaving the Door open for what? You are done Mr. Sherman. Hit that broadcasting booth with the rest of them and be thankful. Some of these guys really don’t get it.

The Bucs brought in coach Ryan to replace coach Sherman.

The best to you with that thought Sherman. Not going to happen; we learned our lesson.