Recently the Bucs held their rookie mini-camp. Recent draftees, undrafted free agents, and invited tryout players all participated in three days of practices. It served as an opportunity for some players to get their first taste of the next phase of their football careers. For others it served as a chance for them to keep their football dreams alive.

Former Bucs head coach Dirk Koetter recorded a podcast for the 33rd team’s YouTube channel. During the podcast he discussed the intricacies of the rookie mini-camp process. He shed some light how minicamps were conducted as well as the goals NFL teams have for the process. Koetter was asked about how much emphasis is put on competition by host Mike Tannenbaum. 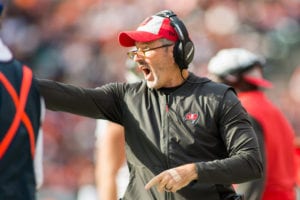 “We tried to really desensitize being competitive during rookie mini-camp because of the risk of injury,” was Koetter’s response.

The rationale he provided centered on weighting injury prevention higher than the need to evaluate competitiveness.  This may fly in the face of what most fans think is important for tryout players to display in hopes of earning a contract. Most football fans have been conditioned to think that long-shots find success through hyper-competitiveness in try-out settings. Scenes from Disney’s “Invincible” or the classic “Rudy” come to mind.

However, as Koetter puts it, most teams are looking for much different qualities from players hoping to make a 90-man roster.

“First goal is to find out who can learn and who can retain information,” Koetter said. “Who can take it to the field? And process that information. And part of processing information is who can communicate?”

The majority of the 60 or so players attending rookie mini-camp won’t return for the next week of voluntary OTA’s. However, the ones who do stand out in the above areas can give themselves a real shot at making something of an NFL career.

The Bucs have had several success stories over the years come in the form of tryout players. Former Bucs Demar Dotson, Adam Humphries, and Brent Grimes all found various forms of success at the NFL level after once being tryout players. Current Buc Cam Brate also counts himself among that group.

This year, three players stood out to the Bucs current coaching staff. The player that really stands out among these three as it relates to Koetter’s comments is defensive tackle Mike Greene. Despite the lack of pads he was able to impress the Tampa Bay coaching staff enough for them release veteran Kobe Smith. Smith had spent two years in the Bucs system.

At any rate the information Koetter provided gave a unique insight into the priorities NFL teams have when they conduct rookie mini-camps.

Makes sense. You hear Bowles repeatedly talk about “retention”. It’s about the info they can process and use. Raw talent and athleticism only gets you so far. Find out who is smart enough and meanwhile their athleticism will shine through if they have it. Then they can try and prove themselves in Camp.

Koetter may have had a different story here had he had a better situation at QB. He’s still a little questionable with his results with Matt Ryan, I always felt Ryan was a really good QB if he’d just been in a better team or had a better Offensive plan. In any case I did like Koetter overall.