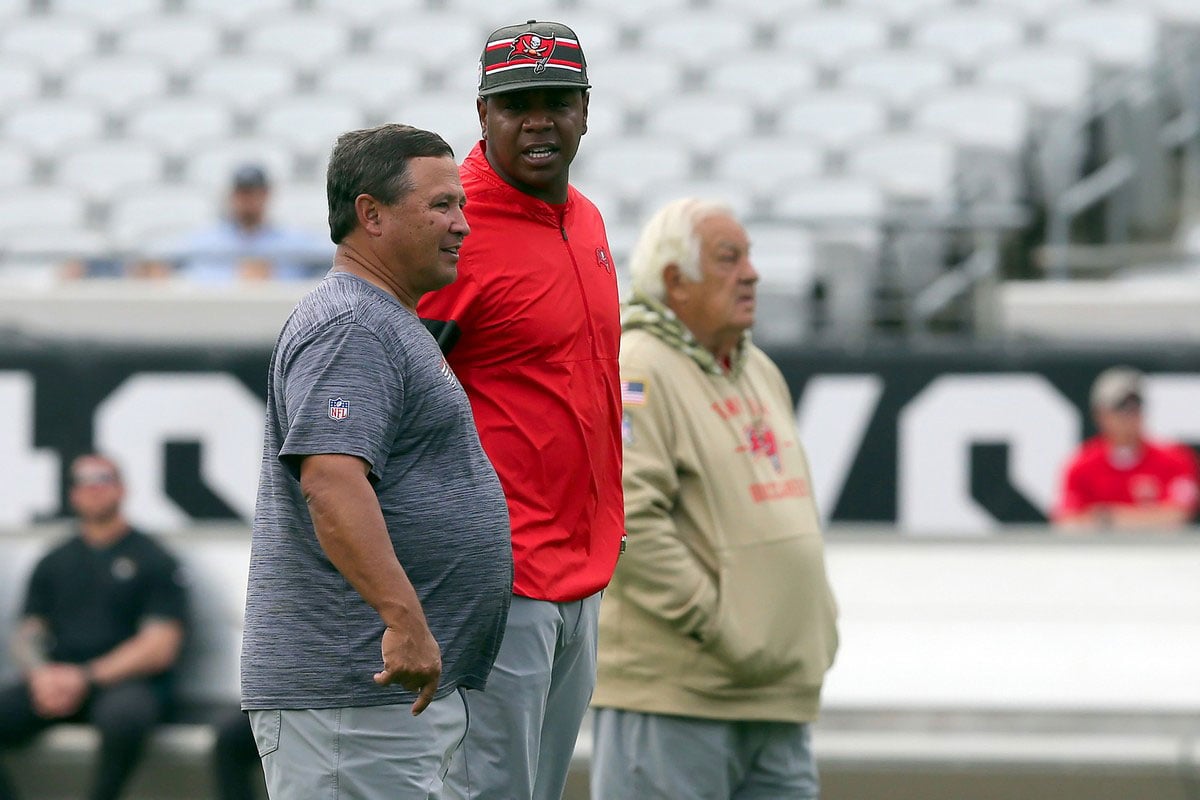 For this weekend’s Pewter Report Roundtable, the crew tackles another tough question. This week’s prompt: Who’s your favorite Bucs assistant coach to interview?

Scott Reynolds: My K.C. Connections Lead Me To McNair

This is a tough question because there are so many great assistant coaches on Todd Bowles’ staff. There are so many great assistants that are knowledgeable coaches and great interviews. It’s tough for me to go against defensive line coach Kacy Rodgers because I love the D-line. And Rodgers is a cerebral coach who gives great answers in press conferences. But as someone who grew up in Kansas City rooting for the Chiefs I actually rooted for defensive backs coach Kevin Ross and running backs coach Todd McNair when they played there. So it’s kind of a thrill for me to cover both coaches professionally. Ross was a star cornerback for the Chiefs when I was growing up. His nickname was “The Rock” because he was as tough as they come. Ross played for Marty Schottenheimer and defensive coordinator Bill Cowher in K.C. His position coach was actually Tony Dungy before he left for Minnesota. Herman Edwards replaced Dungy as the DBs coach. Yes, it was a star-studded coaching staff in Kansas City in the early 1990s. No wonder Schottenheimer turned the Chiefs around. But as much as I really like Ross, I think McNair gives better answers in his pressers. And he’s really developed Leonard Fournette into a three-down weapon, which I appreciate.

McNair was the Chiefs’ third-down back and played with Christian “The Nigerian Nightmare” Okoye and Barry Word. McNair’s running back coach in Kansas City? None other than Bruce Arians. McNair, who played for Arians at Temple, was a great pass-catching back with the Chiefs and earned the nickname “Third-and-McNair” in K.C. When he’s at the podium he does a great job of explaining the nuances of playing the running back position, and he gives candid answers. Plus, I love running backs. So I’ll have to go with McNair as my favorite.

I’m taking safeties coach Nick Rapone because he’s a great blend of developing players to their potential and also gives answers that get straight to the point. If you look at the players since Rapone came here in 2019, they’ve all been better for it. Rapone has mainly worked with a young group that the Bucs had to trust in. He’s already gotten Antoine Winfield, Jr. to a Pro Bowl level status. Would it shock anyone if Winfield gets All-Pro honors by the next couple of seasons? I don’t think so. Rapone helped Jordan Whitehead earn a second contract and a nice payday with the Jets. He’s also put a lot of time into Mike Edwards, who was direct when talking about where Edwards needs to improve on. Rapone has his players game-ready, so they know what to do to keep the ship going if plans change. Look at the 2020 NFC Championship Game. After Whitehead went out with an injury and Winfield wasn’t activated for the game, the Bucs relied on Andrew Adams plus Edwards to finish it out. They succeeded.

Plenty of the Bucs assistant coaches have a common theme in that they are bluntly honest when answering questions. I really enjoyed how open Rapone was about challenging WInfield this year to get more interceptions and take his game to another level. He also provided a ton of great insight about Edwards, who is taking on a starting role this season. Rapone finally trusts Edwards and praised him for the amount of turnovers he’s created even though he’s played half the snaps. He didn’t hold back on his players’ faults, either. Rapone still wants Edwards to get better at tackling now that he’s starting. I’d guess Edwards will have his best season under Rapone’s coaching.

J.C. Allen: New Coach Quickly Becoming One Of My Favorites

The Bucs coaching staff is full of incredible talent and amazing personalities. It’s easy to see why former head coach Bruce Arians pushes for such big staffs. They all bring something unique to the table. Assistant head coach Harold Goodwin is that throwback coach that has no problems cussing you out. But at the same time he’ll have you playing at your best to please him. I also really like safeties coach Nick Rapone for all the reasons Matt Matera laid out. He’s just a wealth of knowledge for the position. Offensive line coach Joe Gilbert is also a favorite of mine that gives great detailed answers and has such a passion for the job. Though it’s the new guy on the block for me after just one interview. When inside linebackers coach Mike Caldwell left for the Jaguars, and Todd Bowles was promoted to head coach it left a void at two spots in the staff. Larry Foote would essentially fill two of those voids. He moved from outside linebackers coach to the inside, in addition to being a co-defensive coordinator. That created an open position at outside linebacker. The Bucs hired Bob Sanders, who coached under Bruce Arians in Arizona from 2015-17.

After one interview I was ready to run through a brick wall for this man. He has incredible knowledge and passion for the game. Sanders laid out detailed plans on how he is going to get the most out of the outside linebacker group. In the short time he’s been here you can tell he has really studied this group. His years of coaching experience should benefit the team. I was captivated listening to him in his first time speaking to the media. He has quickly became one of my favorite coaches.

Josh Queipo: Javadifar Brings Innovation To Win At The Edges

With athletes trending bigger and stronger, injuries are becoming an ever-increasing part of the game. Don’t believe me? According to the NFL themselves, ACL tears alone were at a seven-year high in 2021. Injuries as a whole were 14% higher in 2020 than over the previous decade average. It’s a fact of the game. That’s why Maral Javadifar’s promotion to director of rehabilitation and performance has me hopeful for her potential impact on the team. Javadifar has impressed the organization so much over her three years in Tampa Bay that they created her new position for her. In her role she will be responsible for looking into innovative ways to help players train and rehab in hopes of preventing players from getting injured as much and helping them recover faster. This area of the sport has been one that doesn’t get much attention but can prove to be the silver bullet for teams looking to create a consistent competitive edge. After all Bill Parcells famously said, “The most important thing about ability is availability.”

If Javadifar is able to help lead her team to finding better ways of training and rehab that can allow the Bucs to gain an edge on the injury-front she will undoubtedly become the most important assistant in the entire organization. I personally am really excited to see the fruits of her labor in this area and I’d love to hear more from her too.

Bailey Adams: The Witty Quarterbacks Coach Who’s Seen It All

I really love hearing from quarterbacks coach Clyde Christensen. How could you not? The man has worked with Peyton Manning, Andrew Luck and Tom Brady in his career. His coaching history dates back to the 1970s. He’s a two-time Super Bowl champion. The man has seen it all. So, it stands to reason that when he talks about quarterback play, you want to listen. What’s refreshing about Christensen is that he’ll give you honesty. Ask him a question and you won’t hear him sugarcoat an answer.

Just thinking back to last week, he was asked about his reaction to Tom Brady unretiring. He said he was “ecstatic” and was doing “backflips” (though he added that those aren’t easy for him to do). And when he was eventually asked about what Brady’s return means for Kyle Trask, he was very candid. Although he praised Trask for where he is in his development, there was no hint of hesitation in his voice when he said that he was glad that they won’t have to find out if the 2021 second-round pick is ready this year. He went on to say that if you asked Trask that same question, he would tell you himself that he could benefit from another year of learning as well. You have to love that kind of clear, straightforward answer.

Christensen also has a great sense of humor. Just take his off-the-cuff reassurance that, while he probably did feel like doing backflips upon Brady‘s return, actually doing them isn’t something he can do. In that same press conference, he noted that he was always skeptical about Brady’s retirement, recalling that the future Hall of Fame quarterback was “vacuuming his condo and dusting and stuff” during some of the FaceTime calls the two had during those 40 days. The Bucs have a number of coaches who are good to hear from, but I’ll always look forward to Christensen’s press conferences.

Did Ledyard get fired or what?

He went back to Pennsylvania and changed careers.

Keith Tandy!!! Love that he’s still with the team after his playing days

I don’t know enough about assistants to say really but Keith Tandy “The Tandyman” was great. Gene Deckerhoff used to call him that when he got a pick. Lol. Man Clyde Christianson looks like a fat pig from the side. Dudes guy looks like about to pop. Lol.

👍🏻 did not know about the nickname

Can’t even decide who my favorite would be. My goodness, there’s been so many good ones. Obviously the newer ones always seem to get the nod over one ones before our first Super Bowl. No clue how to pick one.