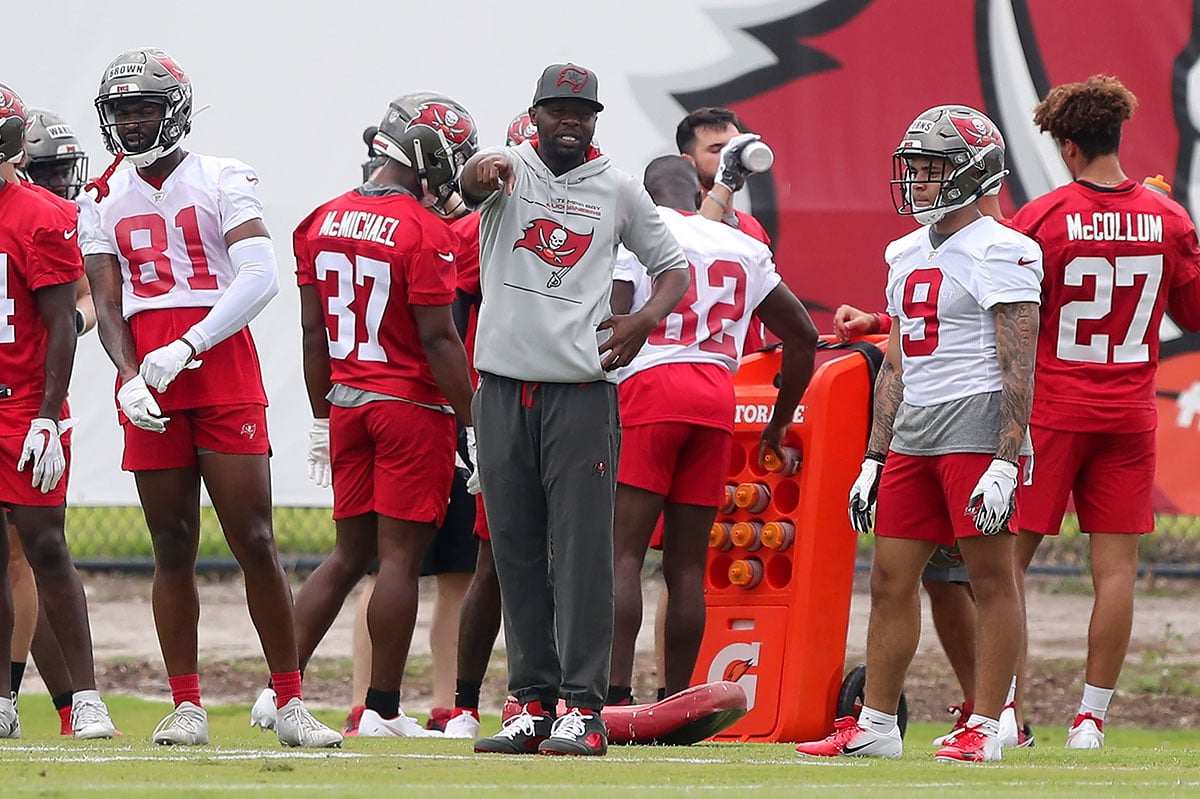 The second day of Bucs rookie mini-camp took place on Saturday under sunny skies and hotter conditions at the AdventHealth Training Center. This is the final practice that is open to the media. Tampa Bay will conclude its three-day rookie mini-camp on Sunday in a closed practice. Here are some key observations from the Pewter Report staff.

Tampa Bay’s trio of undrafted wide receivers stood out during Saturday’s practice – none more than Jerreth Sterns. The 5-foot-7, 183-pound Sterns was the nation’s leading receiver at Western Kentucky last year and it’s easy to see why. Sterns caught 150 passes for 1,902 (12.7 avg.) and 17 touchdowns in 2021 and showed exceptional hands for the second straight day. 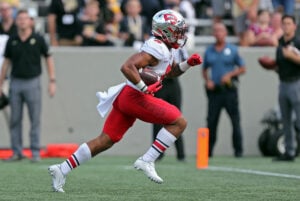 Bowles is impressed with Sterns, whose compact build resembles that of former Panthers and Ravens Pro Bowler Steve Smith. Like Smith, Sterns plays bigger than his size.

“Yeah, he does,” Bowles said. “You’ve got to be pretty durable to play and make that many catches.”

Deven Thompkins and Kaylon Geiger, Sr. also showed well on Saturday. A few minor injuries knocked the Bucs down to just four receivers by the end of practice. Sterns, Thompkins and Geiger made it through the two-hour workout.

It was a good day for the tight end group during the team scrimmage portion of practice. J.J. Howell, a tryout tight end from Yale, reeled in a few nice receptions on the day for extra yards. Undrafted signing Ben Beise also made a few nice grabs. Ko Keift was left all alone in the middle of the field for a short dump off that he turned into a big gain towards the end of practice. Tryout player Sean Dykes also had a few catches, building on a solid first day.

Cade Otton, the team’s fourth-round pick, continues to be out as he recovers from ankle surgery. He told the media he’s running and doing some cutting on his ankle, and hopes to be back by training camp. Otton continued to ask questions and stay involved in the huddle. He took plenty of mental reps for the second straight day. 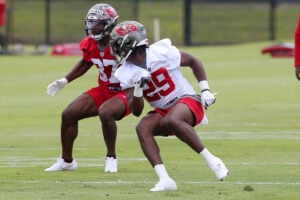 Running back Rachaad White continues to impress on day two of rookie mini-camp. He just has smooth motions, and it really does look like he’s gliding on the field. During team period, White caught a ball out of the backfield and turned it up field with ease.

It’s easy to tell that tryout running back Patrick Laird is a veteran and has done this before. He catches the ball effortlessly and has certainly showed up on tape. Jordan Jace, the tryout player out of West Georgia, has explosive feet. He gets in and out of his breaks easily with very fluid movement. Jace has also done a nice job catching the ball. – J.C. Allen and Scott Reynolds

Saturday’s practice saw better and more consistent play than on Friday. Todd Bowles said that the biggest thing he wanted to see out of rookie mini-camp was who could be coachable and correct the mistakes that they’ve had. Bowles said that the entire group looked more like a football team today, so that’s a step forward. 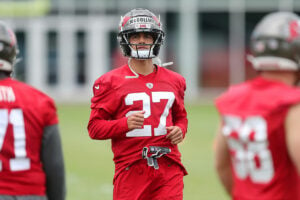 Cornerback Zyon McCollum was one of those players that figured out how to bounce back into it by making a play on the next snap. McCollum and corner J.T. Wahee had some miscommunication during individual drills when working on covering the “pick play” crossing routes.

Then in team drills, McCollum allowed a pass to a receiver on a play to the outside. Right after though, McCollum played tight press coverage and got his hands up on the receiver on the next play, showing that he wasn’t going to allow anything like that again. The rookie was living and learning on the fly.

“He’s very smart,” Bowles said of McCollum. “He’s a heady ball player. He’ll be asked to play what he can play once we get going. But out of pads and everything right now to cut down on the collisions, we’re working on a lot of off technique.”

Another player that was really soaking in all of the information was safety Nolan Turner. It seemed like safeties coach Nick Rapone was coaching him up often on Saturday. There were times where Rapone stopped a drill that Turner was working on just to correct it, but then got it together. It worked because Turner had a pass breakup in team drills on a throw to Deven Thompkins.

The other safety that was making plays was Jordan Happle, who was beat by tight end Sean Dykes earlier. Though Happle rebounded with a pass breakup and an almost interception on a separate play where there was an errant throw.

On the defensive line, Mike Greene had a rep where he drove right over the offensive lineman that was attempting to block. Both players hit the ground as the play went on. 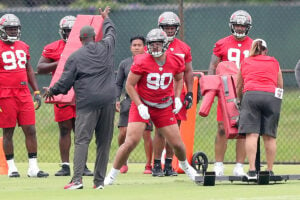 Defensive tackle Logan Hall, the team’s second-round pick, worked on his technique once again. He showed good hand placement and footwork. Hall had one very entertaining play where he jumped and put his hands up looking to knock down a pass. But the quarterback hadn’t yet got the throw off yet, so he had to hold onto it and the play essentially was over. I can’t wait for Hall to use his size to get a couple of PBUs this year.

Pewter Report did an extensive write-up for Hall’s first practice during Friday’s report.

Edge rusher Andre Anthony, the team’s seventh-rounder, was working a lot on his technique as well. He lined up a couple of times in sets where he would get a chip from the tight end and then have to go one-on-one with the tackle. The competition had some good battles throughout practice in this outing. – Matt Matera

On special teams there were several drills ran in the early portion of practice where Kieft and White continue to stand out. Jake Camarda didn’t do any punting today, although, he spent extensive time with Jose Borregales as a holder. Camarda later worked with specialist coach Chris Boniol in practice. – J.C. Allen

Sounds good. I know this is only Rookies on Rookies and things change drastically when they jump in with the Vets, but I like what I’m hearing so far.

I’m sorry if this has been answered already but is Jon still with PR? I heard during the Draft coverage someone ask where he was going. Is he still writing articles?

He left for a mentoring position back in PA. Not sure why PR didn’t write an article about this.

I heard same about Darden last year then when pads came on different story. Sterns is too small.

the Difference is size despite the height. He may not be tall but if he’s stout he’s got a batter chance than past short guys we’ve had.

Great write ups and details on players I haven’t heard of before. I’m rooting for a lot of these guys.