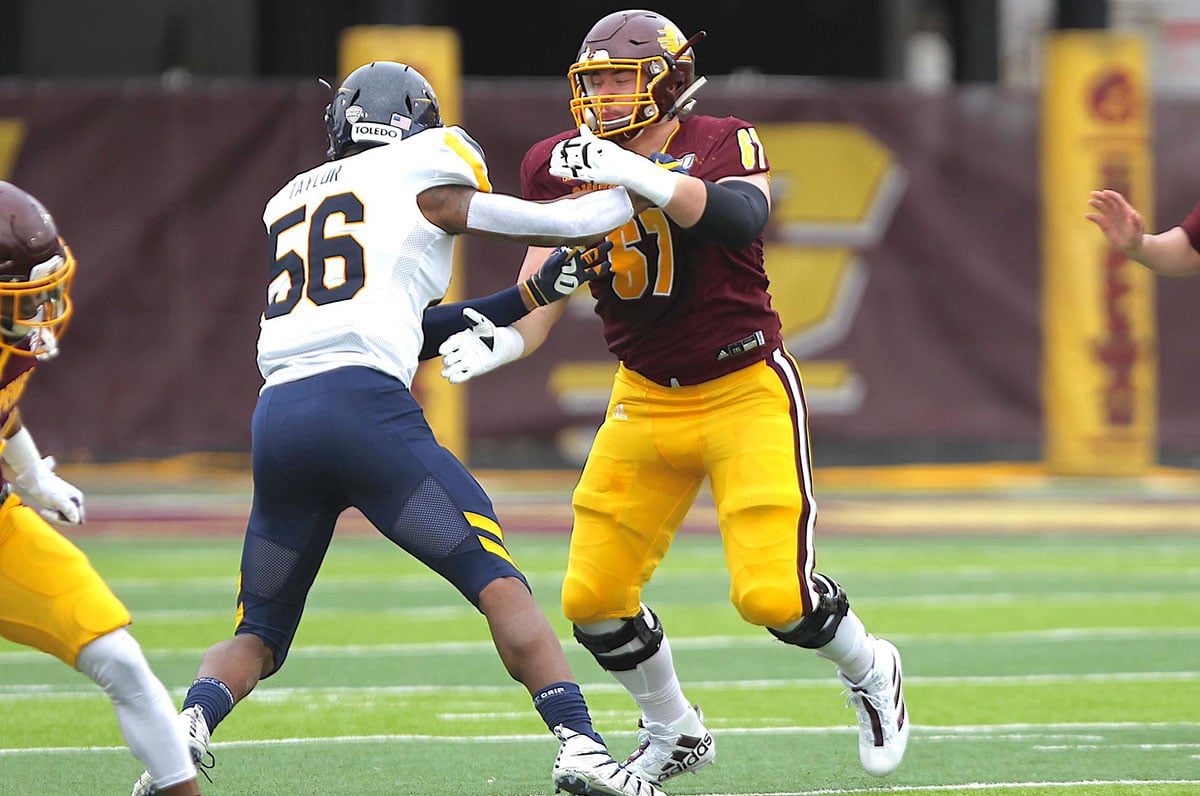 When the Bucs selected Central Michigan offensive lineman Luke Goedeke with the No. 57 pick in the second round, many were shocked. The Pewter Report crew didn’t expect an offensive lineman this early in the draft. After all, Tampa Bay has several solid competitors on their roster to replace Ali Marpet. And Goedeke was ranked 100th overall on the Consensus Big Board compiled by over 70 draft experts.

At first glance, the pick felt like a significant reach at a position the Bucs didn’t really need. But then I watched more of Goedeke’s tape. Perhaps the Bucs didn’t need a guard at No. 57. Maybe other positions were more important to address. But I have no doubt after studying Goedeke’s All-22 tape that the Bucs just landed a stud in Round 2.

One of the best ways to get a feel for smaller school players is to watch them against top competition. Of course, many of these smaller schools are more adept at developing players than their Power 5 counterparts. That’s certainly the case at Central Michigan, where their offensive linemen are developed into technicians in a shockingly short amount of time.

Goedeke, a former tight end, put on one of his best shows of the year against LSU. On the biggest stage, the 23-year old was utterly dominant, putting Tigers’ defenders in the ground all game long. Goedeke’s technique, strike timing and patience are outstanding. Despite playing at a significant disadvantage as a short-armed right tackle, the crafty redshirt senior constantly found a way to make it work.

First, it’s clear Goedeke understands pass protection is not passive. That’s a key principal of playing OL for the Bucs. Against LSU, Goedeke’s tape was comical at times. I’ll show you just a few examples, but he put LSU edge rushers on the ground double-digit times. It was a jaw-dropping physically dominant performance. Goedeke is at right tackle in all of the following clips.

There were several other examples that I did not use for this article, simply because it was redundant. Goedeke faced his stiffest competition of the season, and massacred them. But it wasn’t just brute strength and a nasty temperament that got the job done. Instead, it’s Goedeke’s technique that really stands out. The reason he’s able to get so many defenders on the ground is because of how patient and savvy he is with his hands.

Because Goedeke has sub-33 inch arms playing tackle, opposing edge rushers tried to long arm him a lot. Occasionally he gets caught, and has to really fight to stalemate or win the rep. But he’s so good with his hands that it happens a lot less than it should. Check out the rep below in 3/4 speed to see what I mean.

No. 0 tries to long arm Goedeke off the snap, then cross chop the tackle’s punch with his outside arm. But Goedeke sees the move coming and quickly pulls back his outside hand while slapping the defensive end’s inside arm down with his other hand. This puts the defender off balance for a second, causing him to lurch forward a half step. Immediately Goedeke takes advantage of this misstep, firing both hands into the rusher’s body and locking him up.

Independent hand usage, the ability to use one arm at a time to defend your frame, is key for offensive linemen. It’s especially key when you don’t have longer arms and can’t just end every physical exchange right away with your first punch. You have to be savvy. And you have to be very patient and not get over-extended. A lot of shorter-armed tackles get overeager trying to land the first punch. They’re afraid they’ll get out-reached, and they compensate by leaning too much. But Goedeke trusts his technique and ability to use independent hands to win first contact.

Look how patient Goedeke is here. The LSU edge rusher tries to get him to bite down inside with this hard jab step. But Goedeke knows he’s already in great position to defend an inside move, because his pass set is pure. He doesn’t need to overreact to the inside jab step. He’s patient, waits for the pass rusher to make his move, then pounces. See how quick his strike is! And when he latches, the fight is over. That defender is not getting up the arc.

From there, Goedeke forces his opponent to try a desperation spin back inside. The tackle easily mirrors the counter move, and the rep is over.

Another huge plus for Goedeke in pass protection is his lateral movement. He’s an excellent athlete who can mirror quicker defenders in space. This is a running play, but you can see his ability to change directions clearly here. Goedeke steps down to keep the B-gap defender from blowing up this counter play. But he’s still able to quickly slide back outside to stop the firing edge defender too.

Goedeke In The Run Game

According to PFF, Goedeke was downgraded on just 17 run plays all season for Central Michigan! Watching him against LSU, I believe it. The Chippewas operate a very diverse run scheme, with everything from double teams to outside zone reach blocks. Goedeke excelled at all of it, which should help him fit in with Byron Leftwich’s offense. Tampa Bay diversified their run game last year, and will likely continue to do so.

Goedeke completely uproots the 5-technique here, firing off the ball with low pads and perfectly placed hands. The play is clearly away from him, but Goedeke continues to sustain his block and drive the defender downfield. That’s a common occurrence on Goedeke’s tape. He brings the same finishing mentality that Ryan Jensen and Alex Cappa have. Every rep, all the way, every time. To the echo of the whistle. It’s the same thing here, where Goedeke drives the defender out, then gives him an extra shove after the play.

In fact, sometimes Goedeke even blocks two defenders on the same play. This play against LSU had me howling.

All Goedeke is supposed to do on this play is kick the edge defender out. He does that easily, but then the running back gets creative and bounces outside. Disaster, right? That’s where Goedeke is supposed to be blocking his guy! But instead, the right tackle clamps up the edge defender and steers him inside. As Goedeke drives the LSU opponent down the field, he also takes out the pursuing linebacker. Just like that, a big run is created.

But Goedeke isn’t just a brute in the trenches. He’s also an unbelievable athlete. His explosiveness off the snap is really fun to watch. He reaches 3-techniques with ease, and then sustains the block in space. This is high level stuff.

I’ve now studied 3 Goedeke games, and I’ll watch more in the coming days. But there is no question he should be the strong favorite to win the starting left guard job. His biggest struggles are battling elite get-offs and length on the edge in pass protection. Both of those things will be much more uncommon to see as an interior offensive lineman.

From a technique and strength perspective, Goedeke is ready to play in the NFL. This is not a comparable pick to Robert Hainsey last year, who needed further physical and technical development. Goedeke obviously can still improve, but he is much more refined than Hainsey was coming out of the draft. I’m very excited to see what he can become in a system that develops offensive linemen at such a high level.

Sounds great to me! If there is a position I trust Licht to get it right, it’s OL.

Goedeke had a good game against LSU, but Sean Rhyne had three stellar seasons at UCLA. Rhyne was chosen by Green Bay in the 3rd Round and GB got a great deal. Rhyne is exceptionally athletic, quick, and took down PAC-12 DLinemen on his way to tieing up their linebackers. Exceptionally, strong hands and arms that prevent DLinemen from grabbing him; he is outstanding pulling to his right from his left tackle position and his pass blocking rating ranked him 2nd in the PAC-12 OLinemen. 6’5″ and 320lbs the Bucs missed a good one here; a mirror of Tristan Wirfs… Read more »

Theerealdiehl
Reply to  Ted in Tampa

Agreed Rhyne looked good too, but you just never know what scout said what about who I suppose

I trust the people who literally get paid to scout for an NFL team just a bit more than random fan on the internet lol Maybe that guy will be a great linemen, maybe he would have been great if TB drafted him instead of GB. There was obviously a reason we drafted Goedeke and not another linemen, though.It could literally come down to best fit in the system and gelling with our other linemen that lead to them deciding on Goedeke, even if another linemen might have better athleticism or slightly better size. Goedeke seems like a very nice… Read more »

Spitfire
Reply to  Ted in Tampa

Your boy will be a guard Ted. He’s not a tackle anymore.

What possible good does it do to whine about the player we didn’t draft? The ONLY thing that matters is who we DID draft and how those players will fit into the Tampa Bay Buccaneers and not some other team you think you’re general managing. All we Bucs fans (as opposed to fans of themselves) can do is trust that Jason Licht and his supporting staff and coaches got more picks right than wrong – that’s the best anyone can do. Just be aware that most of the professional draft evaluators are giving Licht and the Bucs the best possible… Read more »

Wasn’t sure about the pick until I read the article. Looks great!

Really like this pick, even though I was worried about using a pick on a position that wasn’t a huge need. But getting a guy that is similar in attitude to Jensen, and has the technique to dominate guys is something that’s hard to pass up.

No team can ever have too many quality linemen, on either side of the ball. Everything starts in the trenches.

Yippe! We now have 4 guards competing for the same starting job that we already know Stinnie can fill fine as he did it already! Sorry, but can’t get excited about this pick honestly. Unless he turns out a HOF guard this seems like a dumb pick to me.

It seems like a dumb pick to you because you are dumb.

This is good. Now if this works Hainsey can continue to develope at center and guard.

Good article–thanks for this Jon! sounds like a worthy pick! Needed this assessment.

Fun stuff with Goedeke, Ryan jensen and Ko kieft in as a blocking tight end we need this package versus saints and rams at least

I think it is a safe bet that Tom Brady loves this draft, with quality blocking, both run and pass, and a good pass catching running back.

Goedeke had a good game against LSU, but Sean Rhyne had three stellar seasons at UCLA. Rhyne was chosen by Green Bay in the 3rd Round and GB got a great deal. Rhyne is exceptionally athletic, quick, and took down PAC-12 DLinemen on his way to tieing up their linebackers. Exceptionally, strong hands and arms that prevent DLinemen from grabbing him; he is outstanding pulling to his right from his left tackle position and his pass blocking rating ranked him 2nd in the PAC-12 OLinemen. 6’5″ and 320lbs the Bucs missed a good one here; a mirror of Tristan Wirfs… Read more »