One of the most fun parts of the offseason for Bucs fans or follower is projecting what your favorite players are going to do next year. Sacks are one of the most exciting plays in football. So naturally it makes sense that predicting sack numbers for your team’s favorite pass rushers can be a fun exercise to pass the time until real football is upon you again.

And so, I endeavored to bring an analytical approach to the process of predicting sack totals for some of your favorite Bucs pass rushers next season. Now a quick look at my process. Sack totals are a volatile statistic in and of themselves. There is very little consistency from year-to-year in the stat itself. However, there is some predictability in pressure rates and a consistency in pressure-to-sack conversion rates over time. What does all of that mean? Let me explain. I looked at Pro Football Focus’ pressure and sack numbers over the past five years. Each year showed a similar rate of sacks to pressures.

Finally, last year PFF had 9,545 pressures turn into 1,471 sacks for a 15.41% conversion rate. All-in-all over the five-year period pressure-to-sack conversion rates have stabilized at just over 15%. Looking a bit more granularly that number breaks down to 18% for edge rushers and 11% for interior rushers.

Now if we know a reliable conversion rate, if we can predict each player’s 2022 pressures, we can predict how many sacks each player can contribute. But how can we come up with predicted pressure totals? This is where it takes some calculated projection. Pressure rate is really where we can see a correlated difference between players with some stability. Another way to say this is this is where skill shines through.

But his average conversion rate for his seven-year career is just over 16% and very close to the 18% conversion rate I referenced earlier. Now let’s look at his pressure rate by year. In Barrett’s rookie year his pressure rate was 11.5%. That number grew to 12% in 2016 and 13.3% in 2017. In 2018, during his smallest yearly sample size it took a big step back to 10.2%. But once Barrett moved over to the Bucs and got a legitimate starting opportunity his pressure rate stabilized. Over his last three years he has registered pressure rates of 14.1%, 15.0%, and 14.1%.

Putting It All Together

Now that the process is defined let’s get to the fun part! Let’s look at each of the Bucs’ Top 5 pass rushers and try and estimate their sacks next season. Note I left rookies out of this exercise due to a lack of NFL data on their pressure rates. Since I showed a lot of the legwork on Barrett let’s finish up his projection. With an estimated pressure rate of 14.25% and assuming his conversion rate ticks up to the edge defender average of 18%, now all we have to do is set an estimated number of pass-rush snaps. Assuming full health, I believe 550 is the right estimate there. Now comes the math. With 550 pass-rush snaps multiplying a 14.25% pressure rate gives us 78 pressures. Multiply that by the 18% conversion rate and we get an estimate of 14 sacks. Now PFF records traditional half-sacks as full sacks, so I do need to clarify that 14 is by their metrics.

Now with Joe Tryon-Shoyinka we have a much smaller sample size. I also found in my research it seems edge defenders take a big leap in their pressure rate in year three. With Tryon-Shoyinka only entering his second year in the league I don’t see him making a huge improvement over the 8.9% pressure rate he recorded last year. However, JTS should see an improvement in his sack number due to two factors.

Number one, I am estimating he jumps from 372 pass rush snaps to 500. Volume is a huge driver of sacks. Secondly, his conversion rate last year suffered to the tune of 12.1%. Assuming that moves towards the league average of 18% and he should see a nice bump. Overall, 500 pass-rush snaps times a pressure rate of 9.5% gives us 48 pressures. 48 pressures at a league average conversion rate translates to 8.5 sacks. 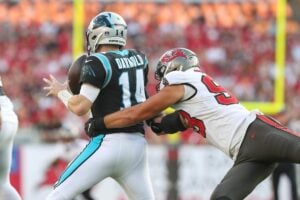 Nelson had a career year in 2021, registering five sacks by PFF’s count. This was in part due to a slightly inflated conversion rate of 19.2%. Expect that to fall. However, Anthony did see the third-year jump in his pressure rate, climbing to a career high 11%. Assuming he can maintain that talent spike over 275 pass-rush snaps, and I project he will match the five-sack season from last year.

Vea has been the rare model of consistency on a rate basis since the Bucs picked him 12th overall in the 2018 NFL draft. His pressure rate has remained remarkably stable falling within a two-percentage point range.

I do think with a more athletic interior rusher next to him in Logan Hall, Vea will see more favorable matchups and I am predicting a pressure rate jump to 13% for him. I also believe that the Bucs will use him more this year, getting him back close to his 505 pass-rush snaps from 2019. So 500 pass-rush snaps at a 13% pressure rate and a league average 11% conversion rate gives Vea seven sacks from the interior.

Will Gholston enjoyed a career-high in sacks last year with 4.5. Gholston attributed the success during a recent appearance on the Pewter Report Podcast to his current coaching staff and Todd Bowles’ scheme. While I don’t disagree with his assertation, a good chunk of his success in the sack department was due to a higher-than-normal conversion rate of 18%. This number is unsustainably high.

While I do predict he will have more pass-rush snaps this season (projected at 375), I see Gholston’s pressure rate just a tick above his career average of 8.33% and in line with last year’s 9.5%. With a return to a 10.5% conversion rate this translates to about four sacks by PFF’s definition.

That’s a combined 38.5 sacks projected from these pass rushers. The Bucs got 27.5 from them last year en route to 47 sacks as a team. Tampa Bay also gets several sacks from blitzing linebackers and defensive backs, notching 8.5 from those units in 2021. A similar total in 2022, plus the increased sack numbers from the players above and some sack contributions from rookie defensive tackle Logan Hall and the Bucs could be at or above 50 sacks this season.

So, what say you Bucs fans? Am I too high on some players? Too low? Let me know what you think in the article comments below.

Prediction season is apparently open, and we’re all dumber for it.

That’s a fun exercise (albeit likely futile). Except for the Rams (who were third in the league with 50), sacks on their own merit alone aren’t a great indicator of the success of a team. The Bucs had a total of 47 sacks last year…seventh in the league. The Steelers had the most sacks with 55, followed by the Vikings with 51. The Steelers, Vikings, Bears, Dolphins, Saints, Browns, Titans, & 49ers we’re all in the Top 10.

For them to get to 50 sacks they are going to have to add another veteran DT and edge rusher. Even the esteemed rookie Warren Sapp only got three sacks his first year so it would seem unreasonable to think Logan Hall might register four. On the other side of the coin, Anthony Nelson is in a contract year so I expect that to make him even more hungry. I wouldn’t be surprised to see him come in at the 8 to10 number. As far JTS is concerned, 8.5 sacks is reasonable but being that he is a first round… Read more »

12-14 seems about right for Shaq if he stays healthy. I doubt Anthony Nelson has anywhere near 10 regardless of it’s a contract year or not. Hall is hard to say. I know Sapp only had 3 his rookie year but with Hall playing next to Vea he may get 5-7. JTS is a very explosive guy but he missed a lot of sacks he should have had last year. I think there is a good chance he can get double digits this year if he has improved a good amount over his rookie year. I’m in agreement with others… Read more »

Last edited 30 days ago by fredster

Reading all of these numbers felt like I was back in Mr. McWorter’s math class. My only response then and now is, “Huh?”