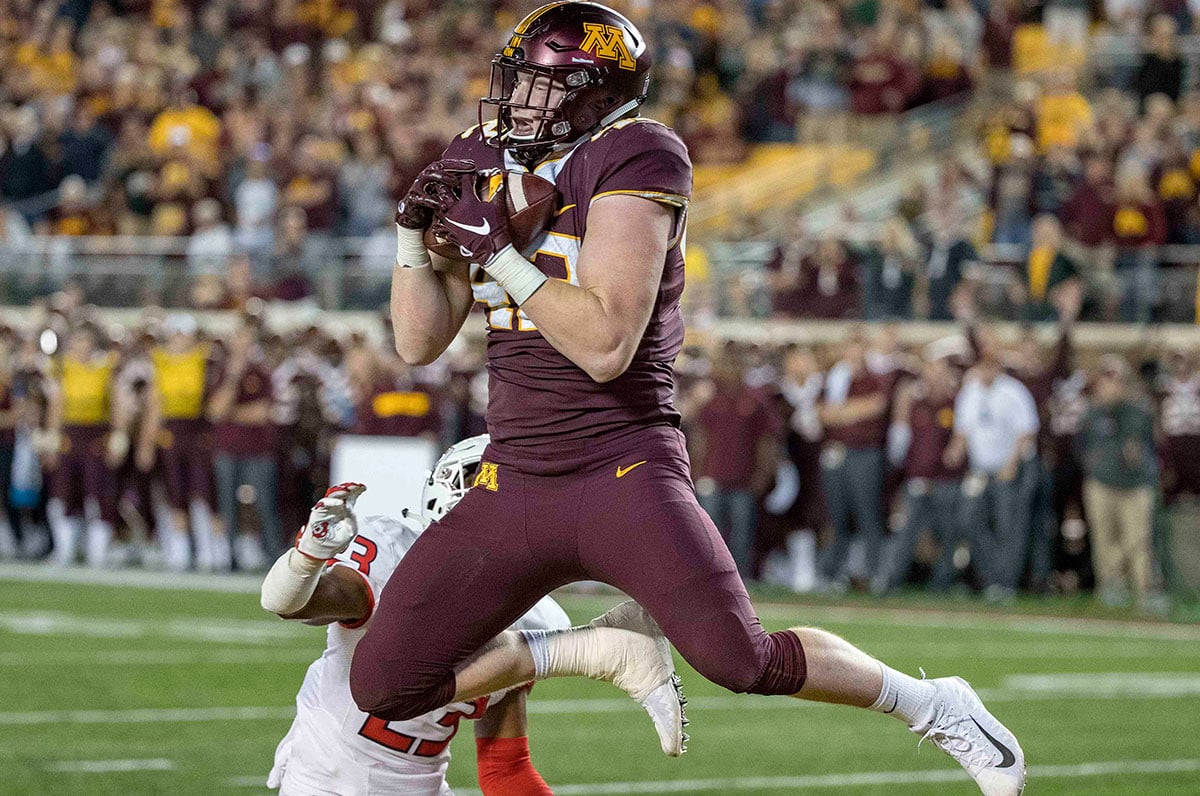 This is pretty awesome. Thought to be a long shot to get drafted by most experts, Minnesota TE Ko Kieft was a surprise trade-up selection by the Bucs in the sixth round. The stalwart run blocker took the call from Tampa Bay while watching the draft with family and friends on Saturday. Their reaction says everything.

Kieft is one of the nastiest blockers in the entire class at 6-4, 259 pounds. The redshirt senior is essentially an extra offensive lineman, running a 4.95 40-yard dash at his pro day. That’s not a big deal, considering Kieft caught just 12 passes for 161 yards and two touchdowns in his five years at Minnesota. The Bucs aren’t drafting him to catch the football much. But Kieft is a monster blocker, capable of driving defenders off the ball and pancaking them well down the field. His blocking highlights are jaw-dropping.

Rewatching Minnesota vs Ohio State and I forgot how frustrating Minnesota's OLine substitutions are. Hilarious how often they run 6 lineman or Ko Kieft. They trust Kieft 1v1 against a 6'6 280 DE in both run and pass. He flat out buries this dude multiple times👇 pic.twitter.com/UEf8gjGnzd

After he was selected, Kieft assessed his own game while speaking with Tampa Bay media.

“That’s definitely fair to say (that he’s primarily an in-line blocker,” Kieft said. “Any kind of run blocking, pass pro – I’m your man. I’ll get down and dirty with the worst of them. That’s my role. That’s what I love to do. But when I am given the opportunity to run routes, catch the football – I’m proficient and can help the team out in that way.”

Now the Bucs have Cam Brate, fourth round pick Cade Otton and Kieft on their roster. There is still a distinct possibility that Rob Gronkowski returns for his 12th season. The future Hall of Famer turns 33 in a few weeks. But even if Gronkowski returns, Kieft is likely to make the roster or at least the practice squad as the team’s No. 4 tight end.

Bucs have recently used OL when beefing up the line. While the demeanour is great, is his hands any better than an OL?
There are a couple kick returners still available (Covey, Ealy) which could have had a better shot at contributing this year. It would be great to win in all three phases of the game

The Freeman
Reply to  drdneast

Maybe we could re-invent the Fullback position? Line him up behind Brady and give him the ball. Or possibly let him block for Fournette or White. That would be an awesome Jumbo package.

I like it man… They love to put a 6th Olineman in and he will be a more athletic option for that and I bet he can come up with a few bail out catches and run over a few people if he needs to.

He won’t make the team, they already have backup blockers with better size.

Family and friends down in the BASEMENT, got to love it . Down home kid work hard and make the team!

So happy for this man and happy for the Bucs! absolutely cannot wait to watch him do for Tampa Bay what he has done for Minnesota! Go Bucs!!

wanted a blocking TE/HB type (or Mercer OG/FB Jason Poe) in the 7th rd, over that 6th OL with BA out of the game plan…
i’m just surprised they traded two 7th rd for a guy projected to go undrafted!

Knightrider79
Reply to  The Freeman

Because he was projected means absolutely nothing. People put too much stock into these so called draft experts. They’re often wrong, and when they are wrong they just move on like nothing happened. Look at the scouting report of Brady sometime, it’ll really make you laugh. That or read the scouting reports on Ryan Leaf or Brian Bosworth.