Day two of the NFL Combine gave us a chance to speak with quarterbacks, wide receivers and tight ends. After Pewter Report spoke to multiple players throughout the day, a pattern emerged. It appears the Bucs are prioritizing meetings with many of the draft’s top tight ends in Indianapolis.

Among the group Tampa Bay has met with are Ohio State’s Jeremy Ruckert, San Diego State’s Daniel Bellinger and Nebraska’s Austin Allen. The best of the bunch this year is Trey McBride, who the Bucs will have a formal meeting with on Wednesday afternoon.

Colorado State TE Trey McBride said he has a formal interview with the #Bucs this afternoon. #NFLCombine pic.twitter.com/krsqdwY2oQ

The Bucs may need to fill spots at tight end this offseason. Only Cam Brate is under contract, and there’s a possibility Rob Gronkowski will retire. O.J. Howard is a free agent, but a re-signing isn’t likely.

With so many other players to sign in free agency, finding a tight end through the draft seems like the best course.

Bruce Arians loves having a blocking tight end. Though Brate is helpful in the red zone, the knock on him is his blocking ability. Enter McBride, who earned playing time early in his career at Colorado State because of his blocking prowess. 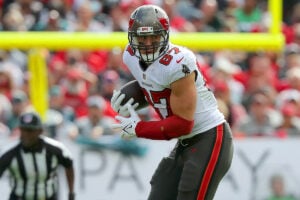 “Our team was a run first team,” McBride said. “I had to put my hand in the ground and block. I’m a tough, physical guy. I think I’m a tremendous run blocker, a guy who can do it all. That’s what we did first, that’s how I got on the field early on in my career. That’s only the only really thing I know, I think being tough, physical and gritty in the run game is important and something that I love to do.”

You can have all the physical traits you want to be a blocker. In McBride’s opinion, it’s the mindset that truly makes the difference. And much like Gronkowski and his siblings, he has his brothers to thank for getting physical at an early age.

“I think growing up with three brothers, we were always wrestling around, things like that,” McBride says. “It probably comes from wanting to be better than those guys and learning how to wrestle with them. Most of all, I think it’s a mindset. That mindset that you’re going to be tougher than the guy in front of you and you’re going to go out there and win. Most of all, I’ve been taught the technique and it’s really just that mindset that I’m going to be better than you.”

Scoring just one touchdown last season could be a cause for concern. But McBride still recorded 1,121 receiving yards and won the John Mackey award for most outstanding tight end. Those numbers show he can do it all. McBride would point to the style of offense Colorado State ran for the lack of touchdowns. If it helps, he did find the end zone during the Senior Bowl.

“You watch the film, we’re a big run team,” McBride said. “You get in the red zone, we run the ball. That’s what our coach loved to do and I had no problem with that as long as we were scoring touchdowns. Never argued, never wanted the ball more, but yeah, of course I’d want more touchdowns and things like that but ultimately we’re a run first team and that’s what we did.

“I think I’m a guy who could be a threat in the red zone. I’ve been there before, I’ve had a lot of success in there. Just this past season it wasn’t what we did, I had no issue with that, but definitely a place where I could be a little better.”

Where’s he projected to go?